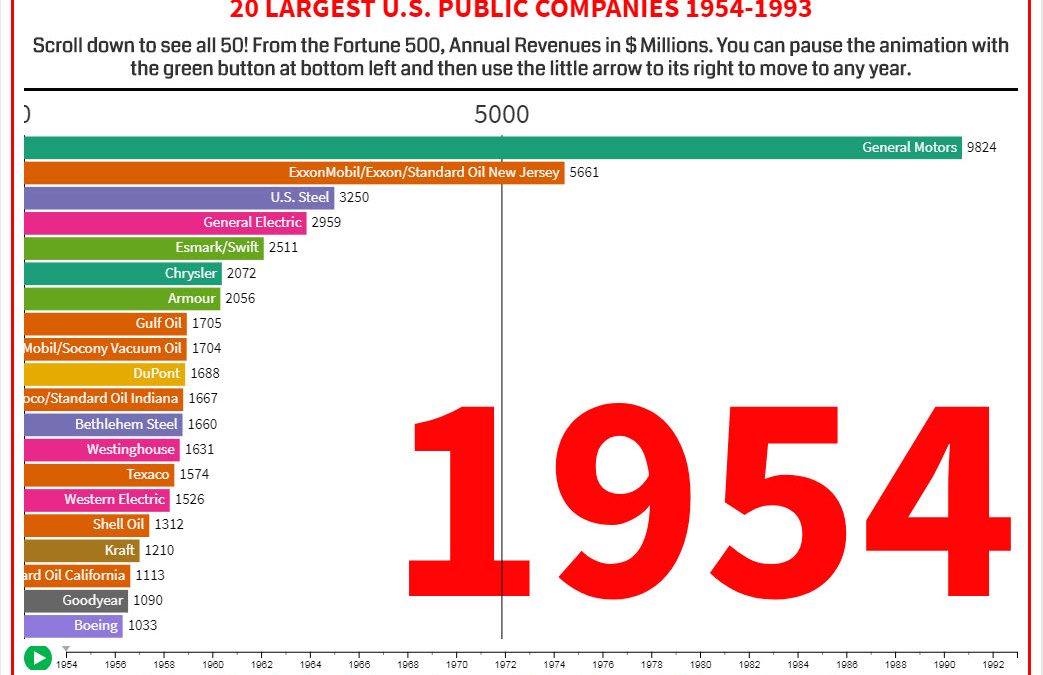 Last week, we produced an animated chart of the Fortune 500 top 50 companies (ranked by sales) from 1994 through 2019, the most recent year for which data is available.  This week, we offer you a similar chart for the preceding forty years, from 1954 when Fortune first published their list (1955 magazine issue), through 1993.

We divided it up this way because Fortune redefined the list in 1994.  Prior to that, they just listed “industrial companies” – those manufacturers that made things.  Starting with the 1994 list, they also included other types of companies, such as service companies in the transportation, finance, and retail industries.

Any student of management or history is indebted to the Fortune editors who dreamed up the 500 list in the mid-1950s.

Together, between last week’s charts and this week’s, we show a full sixty-five years of business change in America.

To the best of our knowledge, no one has ever produced charts like these.  It took us many hours of research, fact-checking, and hand typing from old magazines to compile them.  You can learn a lot just by studying the charts, scrolling up and down to see the fifty biggest companies and how they grew – or shrunk.  The charts can also be paused and restarted, a new feature of the Flourish studio software we use.

In coming weeks, we hope to create additional animated charts in which companies are ranked by other measures, such as number of employees, market capitalization, and profit dollars.  And when new lists come out each year, we will update the charts.

Please share this newsletter with your friends or direct them to those charts on our website.  We invite your comments here.