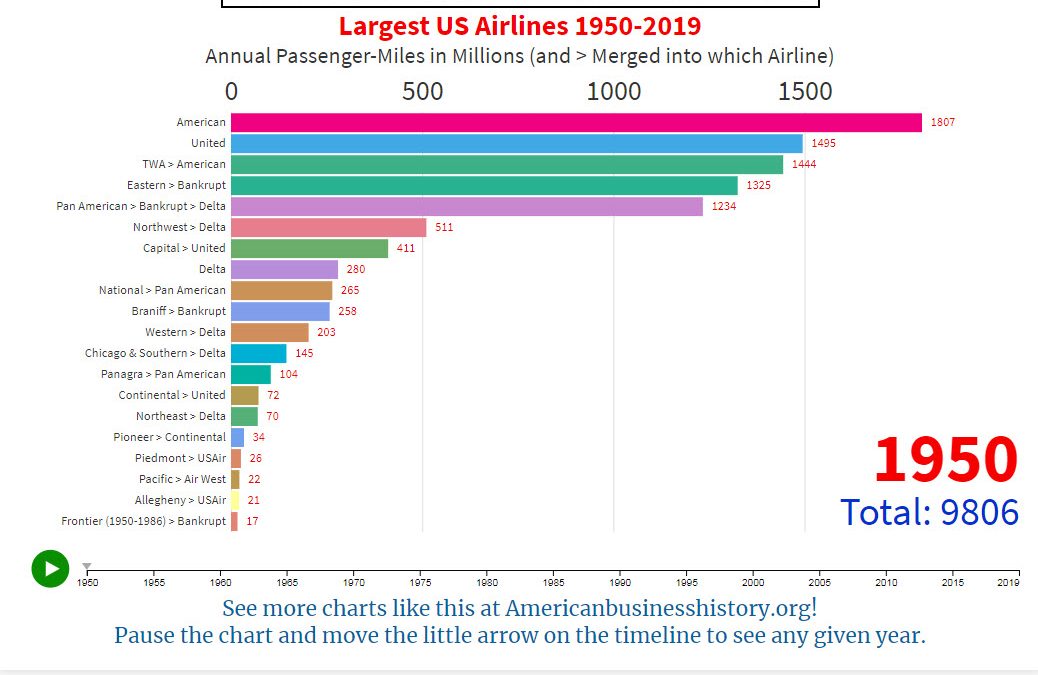 The United States airline system, one of the technological and business wonders of the twentieth century, evolved in the 1920s and 1930s.  With early subsidies from the Post Office for carrying mail, airplanes began connecting US cities.  With successive air mail laws and route contracts awarded by the Post Office, followed by the public’s increasing courage to fly, the major airlines were formed.

The “Big Four” were American, Eastern, TWA, and United, alongside international carrier Pan American World Airways.  In this era, Pan Am was not allowed to carry passengers between US cities (until 1980), and the other airlines had limited if any international routes.

The next largest (but substantially smaller) carriers in 1950 were, in order, Northwest, Capital, Delta, National, Braniff, Western, Chicago & Southern, Mid-Continent, and Continental.  Some of those airlines were later acquired by others, some went bankrupt, and a few emerged stronger, especially Delta.

The US domestic system was far bigger than that of any other country, given the big distances across the nation.  For a quick history of these developments and the evolution of the airline industry, watch this video.  (For the full story of American Airlines, and the great leader CR Smith who built it, see this article.)

We have created two new animated charts showing the evolution of the largest airlines over the last 70 years.  We believe that these are the first such charts, covering such a long time period, available online.  These charts are best viewed on a computer, or at least a tablet, in order to see all the details they contain.

The first chart shows the rank of the biggest airlines based on their annual passenger-miles, one of the two main ways airline sizes are ranked (the other being annual revenues).  We compiled the data for every five years from 1950 through 2019.  (We did not include data from 2020 since it was such an awful year for the industry, due to the Covid pandemic.)

This chart quickly (in a minute and a half) allows you to see when an airline “died,” either through bankruptcy or by being bought (and merged into) by another airline.  Here is the chart:

You can also see that chart as a video with music at https://www.youtube.com/watch?v=inz7eGUef7Y.

Another way of looking at this history is to see the relative sizes of the airlines, using the same data, but showing how big each one was (in passenger-miles), every five years.  This chart gives you a better idea of the relative size of the airlines than the first chart.  In this slower-moving chart (four minutes), you can also see how much the overall US airline industry grew, from a tiny start, over these almost-70 years.  Here is the second chart:

You can also see that chart as a video with music at https://www.youtube.com/watch?v=EcPX03SDyl4.

We hope you enjoy watching these visual stories as much as we enjoy compiling the data and creating the charts!

PS  We continue to support the History Channel Series The Food That Built America, most recently appearing in an excellent episode about the rivalry between Coca-Cola and Pepsi-Cola.