An Organizational Idea That Might Help Your Enterprise – or Your University 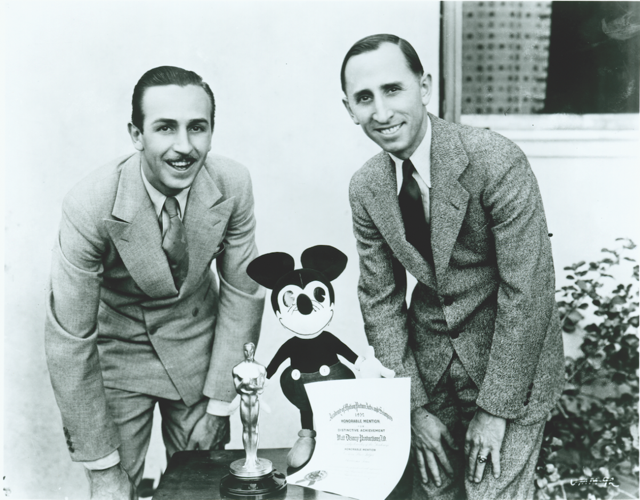 There have been many great two-person leadership teams in the annals of business history.  My favorite might be Walt and Roy Disney, two brothers who laid the foundation for one of the world’s greatest and most beneficial enterprises.  Walt was the now-famous creative force who built a smallish company ($100 million in sales at the time of his death) but had big dreams.  Roy was the conservative finance man.  Without Roy, we might never have heard of Walt.  Without Charlie Munger, we might never have heard of Warren Buffett.

The most common form of dual leadership combines an outward-facing CEO (Chief Executive Officer) who shapes the vision coupled with a COO (Chief Operating Officer) who focuses internally and carries out that vision on a daily basis.  But that is not the only way to structure a two-person team at the top of an organization.
I have spent considerable time working with and studying major service “industries” including universities, nonprofits, museums, government, and hospitals.  These experiences led me to think about how they are managed and led.  I believe many could be much more successful and efficient at achieving their goals and purpose if they tried another approach to the team – breaking the tasks into (1) the core function and skill of the enterprise and (2) all the other tasks which support that function.

I first saw the power of this system at the great company Federated Department Stores in the 1970s.  I worked at their Dallas division, Sanger-Harris.  Other divisions included Lazarus of Columbus, Burdine’s of Miami, Bullock’s of California, Bloomingdale’s of New York, Filene’s of Boston, Foley’s of Houston, and Abraham & Straus (A&S) of Brooklyn, some of the largest and most profitable department store operations.  Today the company has been renamed Macy’s after their later acquisition of a long-time competitor.

Each of these divisions had great power.  The corporate CEO, Ralph Lazarus, only visited each division one day a year, and then he was closely escorted.  The people who ran each division had a tremendous amount of power.  Headquarters in Cincinnati approved plans, budgets, and most critically capital expenditures.  But otherwise, if you ran great stores and made your numbers, headquarters did not interfere.  In fact, when the company was founded in 1929, it did not even have a corporate headquarters – the original Federated was just a combination of three independent family-owned department store companies, Lazarus, Filene’s, and A&S, followed a year later by the addition of Bloomingdale’s.  (Learn More about Federated here).

Each division was run by two people – back then usually (but not always) men.  The Chairman was the division CEO, with veto or tie-breaking power on the team.  The Chairman was always the chief merchant – the person at the top of the system of buyers which finds, selects, orders, tracks, prices, advertises, and displays the merchandise.  Merchandising was and is the core skill of a department store, the purpose of the enterprise, and how its greatness is achieved.

The other person at the top was the President, the chief of operations.  “Operations” means different things in different industries.  In the department stores, it usually included store management, staff hiring and firing, personnel (not yet “HR” in the 70s), legal, finance, data processing or IT, accounting, inventory control and security, warehouses and logistics, foodservice, and on and on.  In effect, the President oversaw any part of the company that the merchant found boring or did not want to bother with.  Both people were paid extremely well compared to most industries.

These teams often stayed together many years.  If you had the right chemistry between the two, you could develop and run excellent, industry-leading stores.  Federated did it year after year for decades.

Other department store companies generally followed this pattern, although at the May Department Stores Company where I later worked, the operations and merchandising roles could be reversed, with the operations leader being the senior member of the team.  At some companies, store management and sales floor staffing were placed under the merchant rather than operations.

This division of authority and responsibility at the top was not the same as the CEO/COO dichotomy.

The division was between specialized (often creative) tasks related to the core purpose of the enterprise and the transactional, administrative, and business policies, structures, and processes most important to supporting that purpose.

Keep in mind this is very different from having a top leader with a team reporting to him, including operations alongside finance, personnel, marketing, IT, and other functions.  The #2 person in this dual system is much more “equal” with the CEO.

Implementing such a system requires you have a deep clarity on what your venture’s core skill really is……what you do better than anyone else.

Over time, I saw this pattern repeat in other industries and situations at different times in history.

In chain drug stores, the highest paid and most-educated person in the store is the pharmacist.  Many pharmacists owned their own independent drug stores.  At first, the big drugstore chains made pharmacists the store managers.  But they had no training in or affection for store management.  Therefore, over time these enterprises have developed more creative strategies for co-management, separating each store’s front end (non-prescription merchandise and cashiers) from the all-important pharmacy, which generates over half of the sales and much of the profits of most drugstores.

I even noticed such a division of labor on a recent trip to Guatemala, where I watched the hundreds of independent bus drivers serving people’s daily transportation needs, often with old school buses.  Each bus driver had another fellow who hopped off at each stop, loudly hawked the route, sold tickets, took money, and hopped into the back door of the bus as it roared off to its destination.  The key skill in the business is driving, best done when someone else takes over the business side.  The same principle applies on cruise ships and airliners, though the captain or pilot holds ultimate authority.

One of the top experts on delivering service and innovation, Dr. Leonard Berry of Texas A&M University, studied the incredibly successful Mayo Clinic and wrote a book about it, in which he pointed out that each medical unit has a business chief and a medical chief.  They form successful long-lasting partnerships.  They work together to do what is right for the patient at the same time they are aware of such things as resources and costs.  They likely do more compromising in a week than Congress does in a year!

Top restaurant people often are either front-end (dining room) managers or kitchen managers (chefs).  Movies have producers and directors, magazines and newspapers have publishers and editors.  The best sports organizations often have a strong business side coupled with strong “operations.”

Clearly, this is an approach to leadership used broadly by society.  But perhaps it is somewhat invisible, with people failing to connect the dots, to see the overarching pattern.

I believe companies are often best served when the core competency has the ultimate say, when the enterprise (for profit or non) is ultimately “driven” by its purpose, by its mission.  Purpose-driven enterprises can make life and cash flow better for customers, stockholders, employees, suppliers, and community.

I am not sure if such management structures and systems are studied in graduate business schools.

They should be studied everywhere.

I have studied several University schools, departments, and academic units.  They are “managed” by deans and department chairs who often have had no training in or exposure to the daily management of an organization.  They have little interest in all the evils that come with it – firing people, monitoring people, rewarding people, budgets, planning, negotiations, and more budgets.  These people are born to study things, to research, to write, and to teach.  Those are entirely different skills.

In fact, the situation is more in need of this idea than business is, given that paperwork in the university bureaucracy is more intense than even the corporate world.  This is especially true at any entity that “reports” to a political entity.  This should not surprise: governments of all types – nations, states, cities – are generally organized by attorneys and people who love rules.

I would guess many parts of government could use the dual division of labor described here: perhaps the IRS, VA, and even the Pentagon.  In many cases, the “core specialist” needs to be freed to do their thing, while the operating partner makes it work, innovatively and without wasting resources, including human ones.

I am sure that in practice, some of the best deans, hospital managers, and government managers apply this general idea, but likely without realizing its frequent application in global business practice.  Nevertheless, I suspect such innovation is applied far less often than it should be.

While any major change in how things are structured can be hard to initiate, some of our most important “industries” would be much more successful in achieving their purposes if they let the talented focus on what they are good at, and support them strongly with administrative skills – at the very top of the organization.