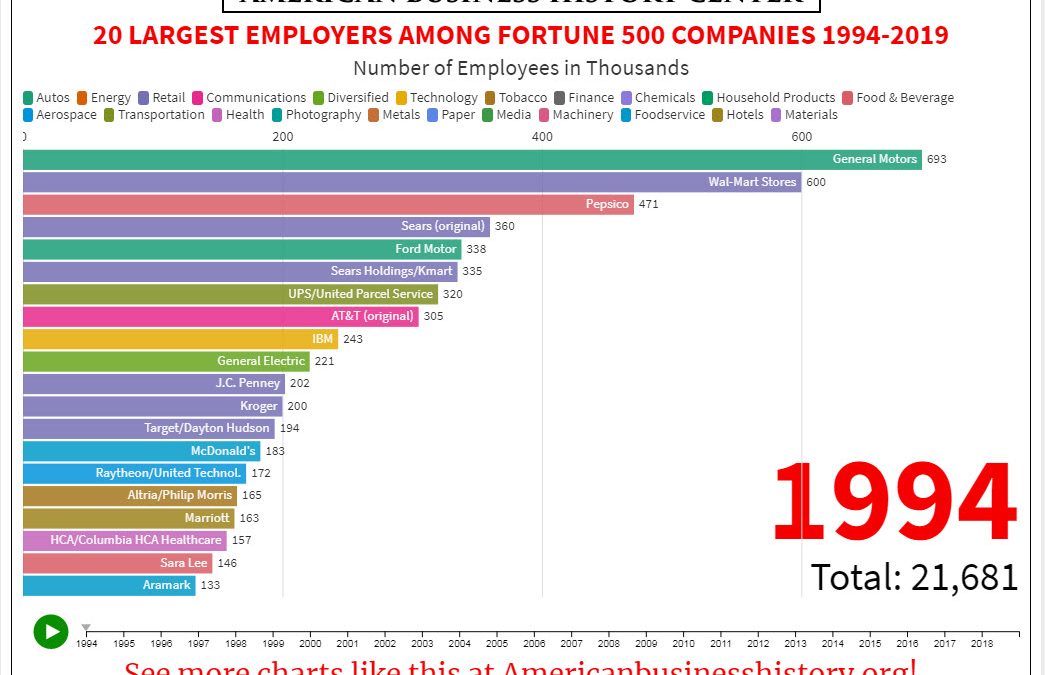 An updated 2022 version of this chart can be seen here.

This week we present another of our animated charts based on Fortune magazine’s annual lists of the 500 largest US public companies (based on revenues).  This time, our focus is on the largest employers among these big companies, from 1994 through 2019.  You can watch, pause, and rewind the whole chart above.

At the start of the chart, you’ll see the decline of the big automakers.  Most of their employees had lost their jobs years before any politician (in either party) took credit for “saving” Detroit’s Big Three automakers.  As the years go by, you will see the rise of service-oriented companies in retailing, finance, and technology.

We believe a case can be made that the complexity of an organization, the challenges in running it, are proportional to the number of people who work in it.  The difficulty of managing, say, Goldman, Sachs, with relatively few employees in a few offices, is vastly different from managing thousands of stores like Walmart or equally great numbers of depots and trucks at UPS.

Speaking of Walmart, it would be hard not to notice their position in the chart, as they rise to over two million employees, most of whom are in the United States.  Some might say that these are all low-paying service jobs.  Yet there is a strong possibility that Walmart created more jobs that pay over $50,000 per year than any other company created total jobs during the years shown.  At least up until Amazon’s “last minute” rise shown in the final years of the chart, as that company became one of the biggest and fastest job creators in American history.

While no company is perfect, Walmart has provided exceptional opportunities for people with varying levels of skills and education and of every race and ethnicity, to rise in their organization.  A good Walmart store manager can earn as much or more than a talented Silicon Valley programmer, without a heavy investment in an elite education.

Over time, more retailers and foodservice companies show up on the list.  Their employment levels are often more stable than in other industries, not showing the ups and downs of manufacturing or finance.  Many of these jobs do not require high skill levels, only demanding common sense and the willingness to serve the public.

Many such service industry jobs are held by young people starting their careers, by seniors looking to stay busy and earn supplemental income, and by family members desiring to add a bit to the household cash flow.  The fact they are only paying $10-15 an hour does not mean they are bad jobs.  In many parts of the country, a couple each earning those levels can live quite nicely.  Wages tend to be much higher in higher cost-of-living locations.

Another relevant topic is the creation of jobs by large companies compared with small business job creation.  The media and small business proponents have widely circulated the claim that most job growth comes from small businesses.  However, those claims are based on the Small Business Administration’s definition of small businesses as being any firm with under 500 employees.  We doubt that such a definition is what most of us have in mind when we think of small businesses.  A 300-employee company is likely doing at least $30 million in annual revenue, often much more.

Compilations of job creation data on truly large companies – say those with over 5,000 employees – is hard to come by.  Total employment numbers from the US Bureau of Labor Statistics (BLS) indicate that, over the last ten years, the number of Americans working at companies with over 1,000 employees has risen from 41.1 million to 50.4 million, while the number of people working for companies with less than 20 employees has only risen from 19.9 million to 21.0 million.  47.6% of the Americans working in private industry in 2019 worked at companies with over 500 employees, and that percentage rises every year.  These numbers imply that larger enterprises are more important to job creation than the stories commonly seen in the press indicate. At the American Business History Center, we believe that every enterprise, of every size, is worth studying, and that every job, no matter the type of work or size of the company, is worth creating.

Please share this newsletter with your friends or direct them to those charts on our website.  We invite your comments here.