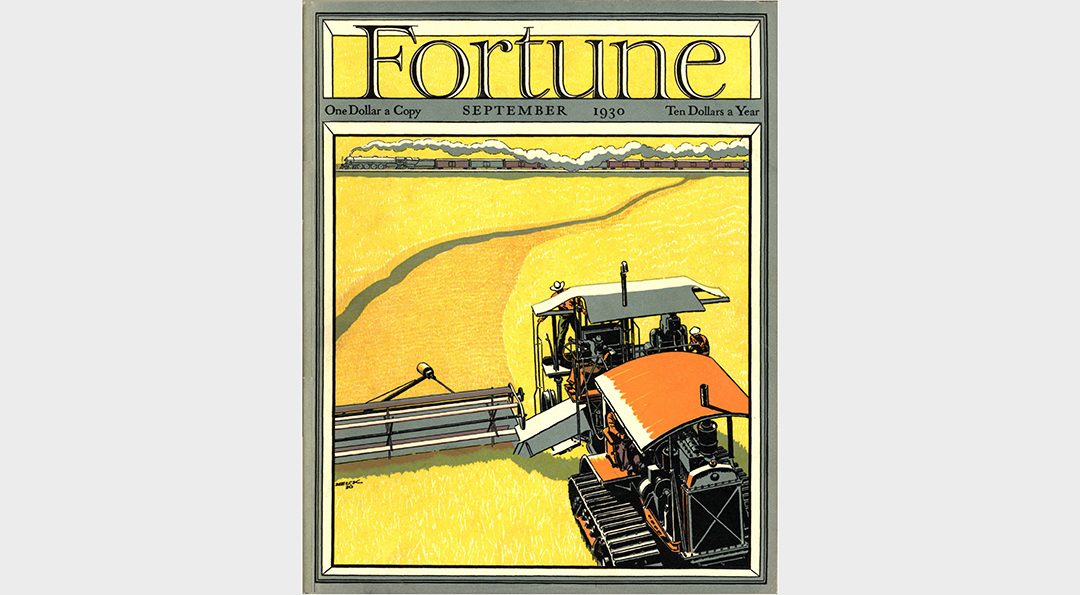 Fortune Magazine, the Wonder of the 1930s

In February 1930, the greatest American magazine publisher, Harry Luce, produced the first issue of Fortune magazine.  His seven-year-old Time magazine had become a huge success.  Luce and his company then created Life in 1936 and Sports Illustrated in 1954.  (To learn the full story of the amazing Harry Luce, watch this video.)

Luce’s idea was to produce a lush, oversized (11 ½” by 14”), expensive magazine that truly and visually told the story of American business and industry.  While Forbes and Business Week (originally called System) predated Fortune, Luce’s creation was from day one the most prestigious of the nation’s business periodicals.  The price, one dollar per copy ($16 in 2020 money), was a shocker, especially given that the magazine’s launch was just months after the stock market crash of October 1929.

Begun as a secret project in the Time offices many months before, Luce tested his idea by assigning difficult stories to the best writers and researchers he could find.  Their first assignment was to study International Telephone and Telegraph (ITT), a company which, at that time, never gave interviews.  He asked his team, “Can you dig up enough on this very secretive company to make a compelling story?”  The writers succeeded on that project, giving Luce the confidence to proceed.

In its early days, Fortune was designed, written, and illustrated by the finest staff available.  Some of the editors and writers were poets (Luce had himself won poetry awards while at Yale).  Some were socialists, but they could write.  He demanded that they “call it like they saw it” – exposing both the best and worst in business, while other magazines often only told the good side.

Harry Luce brought the finest photographers and artists to Fortune, including photographer Margaret Bourke-White and artist Charles Sheeler.  Famous poster artists often created Fortune’s early covers.  (Some of the most beautiful Fortune covers can be found here and here.)

The advertisements, as shown throughout this article, also told the story of the times and of the target audience for Fortune.

Now ninety years old, this issue is a great example of Fortune’s content and writing style.  Articles covered news about the top businesspeople of the day, AT&T, tiled swimming pools, mannequins, the fastest growing cities (led by Los Angeles), and Canadian Pacific, the great Canadian railroad, steamship, and hotel company.  In-depth stories on the rubber, pharmaceutical, and “newspictures” industries were filled with great photographs and stories.  Many of the articles were far longer than magazines usually publish today.  They were written for “serious readers.”

One feature was devoted to Al Smith and Skyscrapers.  Smith, the former governor of New York, was the first Catholic nominated for the Presidency, losing to Herbert Hoover in 1928.  He was the “front man” associated with the Empire State Building, backed by the DuPont family who controlled both DuPont chemicals and General Motors.  The building, then under construction, opened the following May.  The article is beautifully illustrated with architectural renderings.

The early Fortunes had a writing style unlike anything before or since in business journalism.  Here is an example of the beginning of one story:

Once upon a time a man sat down and wrote about a company.  He told of the foundation and early years of the company and of its steady growth.  Then he told of war inflation and of post-War prosperity and pictured in sharpest detail the many absurdities into which the company was betrayed by the boom time of 1918-20.  He was amused by a system of inter-office correspondence which became so complicated that the many vice presidents and their many assistants could not keep up with their intra-mural mail, so that a special inter-office telegram on bright red paper was devised for really important messages.  He laughed at a great super house-organ, sold to dealers for five cents, costing the company from ten cents to twenty cents to publish, reaching a circulation of a million a year, yet worth not a nickel in advertising performance.  And, finally, he pictured the president of this company as a man who had built in Ohio a house much larger than he needed, had then built another house in Florida, and who – on the eve of the 1921 deflation which almost toppled his company into bankruptcy – was vacationing in Europe, having succumbed to the prevailing theory that it was a reflection upon an executive’s standing as such to be caught within a thousand miles of his business.

This company was the Firestone Tire & Rubber Co. of Akron.  And the man who was writing about it was Harvey S. Firestone.

It is not a usual thing for a man so to satirize his business and himself.

Thus began an in-depth look at the tire industry, the rubber plantations of southeast Asia, and the big four rubber companies and their leaders, topped by Goodyear (which was named after the long-dead inventor of vulcanized rubber, Charles Goodyear).

When describing business leaders, the articles often went into great detail about the individuals’ appearance, style, and preferences.  Canadian Pacific’s Chairman Edward Beatty is described as “the erstwhile lawyer, always well dressed, always the athlete (he avoids golf, however, as involving repression) …”

The story of AT&T stressed a paradox.  On the one hand, the company had repeatedly and plainly stated that it would not try to make the highest profit possible, that once it made enough profit to satisfy the basic requirements of stockholders, all the extra would go to lowering prices or improving telephone service.  (That was not then, or now, the politically correct thing to say.)  Yet AT&T was the world’s largest company in assets, and the most widely held and favored stock, with over 500,000 stockholders.  Every great investor held the stock and recommended it, despite the company’s resistance to maximizing profits.  The AT&T article concludes with:

That a company can exist on any other basis than the making of the greatest and most immediate profit is a proposition which the speculative mind is congenitally unable to grasp….There is no other company that could more appropriately regard the public as the residuary legatee of its benefits, and no other company that has acted on the belief that giving this consideration to the public is the best service for its stockholders in the long run.  That the Telephone company does so regard its public is a statement which no one is compelled to believe.  It is also a statement which it would be presumptuous for anyone to deny.

Perhaps the most interesting story is that of the “newspictures” industry.  Five big competitors sent photographers around the nation and the world seeking the best pictures, to be licensed to publications across the globe.  This article includes the following bits of information:

We maintain an almost-complete set of these old Fortune magazines at the American Business History Center.  They are invaluable for our research into business history.

Every issue makes us think – how have times changed?  How has business changed?  How have things not changed?  In every issue, we learn about our past, we learn about what made some companies succeed and some companies fail.  We learn how their leaders thought, acted, and reacted to the events of the times.  The added benefit of decades-long hindsight yields even more perspective and insight.

We urge you to peruse some old Fortunes yourself.  Copies are readily found on eBay and other sources.  Because of their beauty, especially the covers, people did not throw these magazines away as fast as they tossed out their competitors (old issues of Forbes are much harder to find).  Any good library should also have a complete collection of Fortunes.

To spend time in one or more issues will be your good fortune!

Please give us your comments and thoughts here.