Can Companies Re-invent Themselves? The Target Story 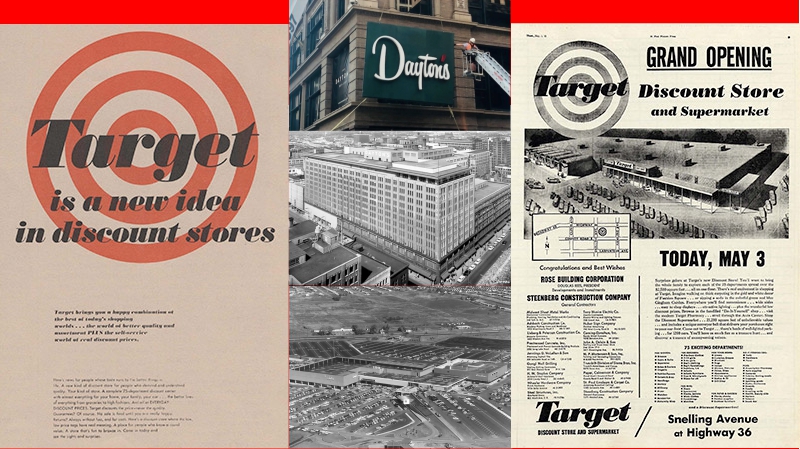 Much has been written about the idea of “reinventing” your company.  However, in my 50+ years of studying big business, I have rarely seen it happen — successfully.  Here, from the treasure trove that is business history, one of the few cases of a great company which against all odds actually did “reinvent” itself.

Wind the clock back to 1962.  The US was covered from coast-to-coast, in cities big and small, with family-owned department stores.  These stores were the dominant retailers of general merchandise (not food) everywhere.  They not only sold most of the clothing and home furnishings but were also the primary buyers of newspaper display advertising and centers for the community and events (think Thanksgiving Day parades).

Over the early part of the century, many had joined or sold out to holding companies, including May Department Stores (formed in 1911), Associated Dry Goods (1916), Mercantile Stores (1916), and R.H. Macy and Allied Stores (acquisitions starting in the 1920s).  The biggest of all, Federated Department Stores, was formed in 1929 by three independent stores: Lazarus of Columbus, Filene’s of Boston, and Abraham & Straus of Brooklyn (Manhattan’s Bloomingdale’s joined a year later).

But most of these stores remained independent, including the leading stores of Chicago, Philadelphia, Cleveland, Indianapolis, Washington, Atlanta, San Francisco, Detroit, and Minneapolis.  The largest store that remained privately owned by the founding family was J. L. Hudson in Detroit.  Another one of the best-run family-owned stores was Dayton’s in Minneapolis, where this story begins.

George Draper Dayton was a straight-shooting Presbyterian who arrived in Minneapolis seeking real estate investments.  In order to help out a church, he bought their former location and lured an existing “dry goods” store to the site.  In 1902 he bought out the store, aptly named Goodfellow’s, and renamed it Dayton’s.  Over time, Dayton’s became the dominant store in Minneapolis, even against competitors owned by the far larger Allied Stores and Associated Dry Goods.  But unlike most other independents, neither he nor his descendants went public, availing the company of the equity markets.  A laggard, sleepy company?  Hardly.

In 1950, his 5 grandsons took control of the company, each owning 20%.  By 1959, Dayton’s single downtown store generated revenue of $70 million each year, disproportionate to Minneapolis’ size and equivalent to $600 million in 2021 dollars.  The grandsons debated whether to live off the fat of the land, keeping the extremely profitable store along its historic track, or whether to become more ambitious.  They realized most wealthy families ended up fighting each other, and figured if they grew the business, they’d more likely maintain harmony among the extensive Dayton families.

One of the grandsons’ early moves was to build the first major enclosed shopping mall in the US, Southdale, in 1956, which they developed and owned.  They took the unprecedented step of inviting into the mall their long-time downtown Minneapolis competitor, Donaldson’s, owned by the big Allied Stores group.  (Two years earlier, in 1954, fellow department store operator Hudson’s in Detroit had built a pioneer open-air shopping center Northland in suburban Detroit but had not invited any other department stores from downtown Detroit.  Hudson’s Northland soon became the highest revenue branch department store in America.)

At the same time, on the great retail stage long dominated by these huge, high revenue stores, the 1950s and 1960s saw the rise of a scary phenomenon — the discount department store.  Thundering out of the northeast after World War II, but copied everywhere, these new stores rented old warehouses or built new but plain one-story buildings and filled them with cheap fixtures loaded with whatever national brands (or factory overstocks) they could get their hands on.  They ran dense black and white newspaper ads, in sharp contrast to the department store fashion ads with plenty of white space.  The discounters proclaimed, “Price Busters!” and “How can we sell so cheap?”  Leading early discount store names included Korvette’s, Arlan’s, White Front, Two Guys, Topps, Gibson’s, Zayre, and many others.

Most of the old department stores were unsure of how to react.  The new business required a whole new mindset and plenty of capital.  The ugly, often dirty new stores repulsed the old merchants.  Even if they could copy the discounters with new stores, wouldn’t they cannibalize their existing, highly profitable businesses? Nevertheless, a few had the courage to give it a try, among the earliest was L. S. Ayres of Indianapolis with its Ayr-Way discount stores in 1961.

The great dime store chains were quick to enter to fray.  The business of F. W. Woolworth, W. T. Grant, S. S. Kresge, and others was already in serious decline, yet they had national systems for inventory, distribution, advertising, and management in place.  After a year of study, Kresge executive Harry Cunningham launched Kmart in 1962, which went on to lead the discount store industry for the next thirty years.  Also in 1962, franchised “Ben Franklin” dime store operator Sam Walton opened his first Walmart in Rogers, Arkansas.

In that same historic year 1962, the Dayton brothers decided that there was an opportunity to open an “upscale” discount store with a more fashionable approach to the business, opening three Target stores in the Minneapolis area, and one in Duluth.  While they knew these new stores might hurt their Dayton’s business, they also knew that if it worked, they could take the concept anywhere in the US, and not be limited to their Minnesota markets.

The idea of an upscale discounter seemed logical, and several other department store companies followed Ayres and Dayton’s leads.  Rich’s of Atlanta opened Rich-way, Federated Department Stores opened Gold Circle and other concepts, Strawbridge & Clothier of Philadelphia opened Clover Stores, and May Department Stores created Venture Stores (designed by the brains behind Target, the highly creative John F. Geisse).  Other players bought or opened discount chains.  Each of these companies had the same fashion merchandising know-how as Dayton’s that might have paid off in the discount world.  But none of them had the conviction and commitment that the Dayton brothers did.  By 1968, Target was the largest of the department-store-owned discount store operations.

Dayton’s didn’t just pursue its discount store strategy.  In 1967, the company finally went public, and in 1969 acquired the larger Hudson’s stores in Detroit, renaming the company Dayton-Hudson.  With this move, the company became the 14th largest retailer in the US.

Besides expanding its core department store business, Dayton-Hudson became an ambitious tester of new retail ideas, very rare in the retail industry.  Much like the R&D departments of big industrial companies, Dayton-Hudson acquired or experimented with concepts in hard goods and electronics discounting, jewelry stores, bookstores, and many other categories.  Their 1966 concept B. Dalton went on to become America’s largest bookseller in the 1970s and 1980s.  Over two decades, the parent company reportedly tried as many as 18 different ideas.  The company also expanded in other ways, buying California soft-goods discounter Mervyn’s in 1978 and Chicago’s great Marshall Field department store for $1 billion in 1990.  (For another retailer that also experimented with new concepts, resulting in that company becoming one of the world’s largest corporations, even bigger than Target, see this article.)

The path to the “right idea” was a rocky road.

Making the upscale discount stores work was anything but easy.  If you invested in nicer stores, you might not be able to deliver the low prices required to compete with the Kmarts of the world.  If your stores felt too nice, your customers might assume your prices were un-competitively high, whether they were or not.

In 1973, I arrived at Citibank in New York as a junior securities analyst covering the retail industry, my first job after college.  My veteran analyst boss, Pete Wetzel, gave me an assignment to get my feet wet: write up a recommendation that our investment management department sell all our Dayton-Hudson stock.  This was purely a training exercise, as the bank had already sold off the stock.  Why?  Because Target, consuming much capital and with the hopes of Wall Street riding on it, had had a terrible year.  Dayton-Hudson had not delivered on promised profit levels, and the stock collapsed.  We got out.  I told Pete, after looking into the company, that I thought it still might be a good long-term investment. He said, “You are probably right, but it will take a few years for the Street to forgive them; the stock will be dead for a while.”

The other department store companies which had opened discount stores struggled with the concept.  Few of them met financial expectations.  Their hearts were not in the business, and neither were their wills.  Over time, they all gave up, many of them selling off their experiments to Target, which continued to press ahead come hell or high water.

Throughout this history, Dayton-Hudson became well known for its values and unique approach to business.  Always considered a well-run, highly ethical company and employer, the company focused on developing and supporting great people from top to bottom.  They led the way in “transparency” with investors, revealing more detailed data than the Securities and Exchange Commission and stock market regulators required.  The company aggressively developed advanced information and measurement systems.  Dayton-Hudson has always been among the most generous of big companies, donating 5% of pre-tax income to charities in its markets.  No New York Stock Exchange company has been more generous.  And the Dayton family as individuals have been extremely active politically and in nature and environmental causes.

In 2000, no longer under direct management of the Dayton family, but continuing these strong traditions, Dayton-Hudson was renamed Target Corporation after its primary business.  In 2004, the company effectively sold off its own parentage, selling the large department store operations to the May Department Stores Company.  This had to have been one of the hardest decisions in the company’s history.  These steps completed the transition from being one of the top department store operators in America to being the only valid, direct competitor to Wal-mart, given the long and continuing decline of Kmart.

By 2005, most of the big US department stores, including the former May Company, Allied Stores, Dayton’s, Hudson’s, and Marshall Field, had been consolidated into Macy’s.

Due to Covid, 2020 comparisons were distorted, because Macy’s was forced to close many of their stores while Walmart and Target stayed open, considered essential stores because they sold groceries.  In 2020, Target posted far higher sales and profit growth than Walmart.  Macy’s lost money.  (For more information on the major retailers and trends, see my 2016 study; for more on profit measures, see this.)

In the big picture, this is one of the most important and successful “reinventions” in US business history.  But the trek from regional department store to discount industry leader was not easy.  What can we learn from this story?

First, nothing is more important than corporate will.  See this great book, one of the best management books written since Peter Drucker’s death, for more on that.  How committed to the future is your company?  Do you clearly see the future?  Are you willing to take the risks and lumps that come with change?  Would you be willing to cannibalize or even sell off your core business as this company did?

Second, your institutional principles and values matter.  If Dayton-Hudson had not had a strong emphasis on ethics, philanthropy, people, and information, would it have been able to pull this off, in the face of the fiercest competitor in global retailing, Walmart?

Third, are you experimenting?  Does your organization have an “R&D” department, even in retailing?  Have you tried anything like 18 new ideas within your field or related fields?