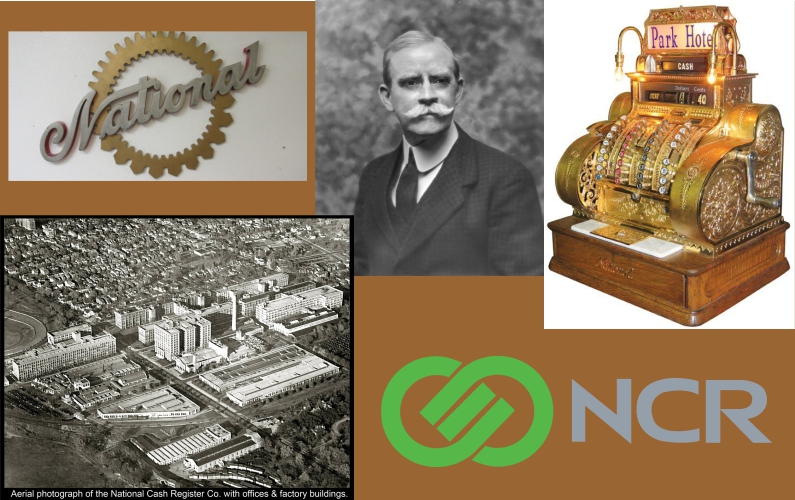 In our article on the three greatest companies in American history, we listed both General Motors and IBM.  Neither of those companies would have been the great successes they were without the contributions of proteges of John Henry Patterson, though he did not work for either company himself.  Sales methods used around the world today might not exist without John Patterson.  One of the great technology companies, still going today, would not exist without him.  Yet few know of him or his story.  Patterson was one of the great business builders in American history.  A complex man, he was a ruthless tyrant but also led the way in better treatment of (some of) his employees.  Here is a brief look at this most interesting gentleman.

John H. Patterson was born in 1844 near Dayton, Ohio, the seventh of eleven children.  He served briefly in the infantry in the Civil War and developed an admiration for military discipline.  He would later write, “I believe that a business ought to be like a battleship…in cleanliness, in order, in the perfect discipline of the men, in the readiness for use of every part of the plant.”  After graduating from Dartmouth College in 1867, he returned to Ohio and went into business.  He started as a toll-collector on a canal, then went into coal and wood selling.  In 1879 he and one of his brothers began a partnership which operated retail coal yards and coal mines.

One of their operations was a grocery and general store in Coalton, Ohio, which sold supplies to the miners.  Patterson would later recall, “At the end of three years, although we had sold annually $50,000 worth of goods, on which there was a large margin, we found ourselves worse off than nothing.  We were in debt, and could not account for it.”  He found out his employees were failing to collect from credit customers and were giving merchandise away to their friends.

In 1878, Dayton saloon owner James Ritty had developed the first primitive wooden cash register, named the “Incorruptible Cashier,” to reduce theft from his cash drawer.  Patterson bought four of the machines and his losses were eliminated.  Gradually investing in the cash register business, Patterson by 1884 had control of that business and its patents, renaming the company the National Cash Register Company.  John Patterson was forty years old.  From that point forward, the short, wiry, intense Patterson devoted his life to dominating the cash register business and to getting registers into every saloon and retail store in the world.

Taking Over the World

Under Patterson, who lived until 1922, the National Cash Register Company (often called “the Cash”) went on to sell thousands, then tens of thousands, of their machines and succeed in dominating the industry, which had many competitors.  In order to do so, he faced stiff opposition from the retail and saloon clerks, who resented the lack of trust implied if their employer bought a cash register.  Patterson and his brother owned the whole company, which did not go public until after he died.  Rather than recount the growth of the company here, we focus on Mr. Patterson, his style, and his impact on the world of business.

To say that Patterson was ruthless may be an understatement.  As part of his sales strategy outlined in the paragraphs that follow, he used every trick in the book to drive competition out of business.  Failing to do so, he bought them out, buying up most of the industry.  His methods included dropping prices below cost to meet cheap competitors (“predatory pricing”), running ads targeting specific competitors claiming their products did not work, making clones of competitors and selling them under different brand names (not National), and taking competing machines and rigging them to fail, then using them to demonstrate their weaknesses to potential customers.  He also sued any and all comers for infringing on National’s patents, and usually won, as the National machines were in fact the most advanced.  When a competitor did bring about a good innovation, he bought them out and incorporated the improvements in National’s machines.

These practices eventually caught up with Patterson and his associates when the government tried and convicted them for their many misdeeds.  He was headed for jail when the verdict was overturned upon appeal.  But it is also possible that the government backed off when Patterson “saved” the people of Dayton in the great flood of 1913.  He used all his resources and plant facilities to rescue, feed, and house the people of the devastated city.

In his usual, methodical, disciplined system, John Patterson also used every trick in the book to develop a selling system and motivate his salespeople, who were relentless.  He “carpet-bombed” potential customers with direct mail flyers, to the extent that one retailer wrote the company, “Let up.  We done you no harm.”  National Cash Register was among the earliest and heaviest advertisers as it promoted its products and ridiculed the competition.

Patterson, always with a blackboard at hand so he could draw his many diagrams, spurred on the sales force with motivational slogans, pep talks, cheering sessions, and company songs.  Patterson pioneered the idea of a sales manual, which ran to hundreds of pages of specific instructions as to how to dress and how to deal with reluctant customers.  The salespeople had to memorize and use exact scripts.  He was the first, insofar as we know, to develop sales quotas for each salesman, who were assigned exclusive territories so as to avoid competition between salesmen and to encourage them to share ideas and best practices with each other.  Each salesman and their supervisor had to write up daily reports sent to headquarters in Dayton.  These practices spread to other industries, often by hiring ex-National salesmen, and continue in use today.

There were two sides to Mr. Patterson when it came to his employees.  On the one hand, in his huge Dayton plant, he was a leader in what was at the time called “Welfare work,” which meant treating the employees to extra benefits.  He added daycare for employees’ children, cafeterias, lunchtime entertainment programs, a beautiful landscaped factory environment, and classes of all types in his schoolhouse.  Other companies followed his lead.

On the other hand, Patterson’s ruthless, tyrannical nature also came through.  Anyone who violated his many edicts, from how they ate to how they presented themselves, was fired on the spot.  One person began a talk with, “I am not very good at public speaking,” at which point Patterson replied, “Then, why are you speaking?  Sit down!”  The man was then out of a job.

In another classic Patterson story, he asked a factory manager if he was satisfied with his plant.  The man said, “Yes, we have great workers and make great products, I am totally satisfied.”  Patterson then fired him, because he thought dissatisfaction was key to success.

Any executive who was too good, who assumed too much authority or challenged Patterson, was dismissed immediately.  Even one top executive who worked for him for decades and ran the company after Patterson’s death admitted that he never really could “relax” while Patterson ruled.  Yet John Patterson’s drive, his passion for selling, and his underlying belief that it was only right that he sold all the cash registers in the world, led to continued success and growth.  He was a hero and model to some, the devil himself to others.

National’s early cash registers required hand-cranking.  When electricity became more readily available, eliminating this tiring effort became a priority, but no electric motor was small and light enough to fit inside a cash register.  So two of Patterson’s engineer-inventors, Charles Kettering and Edward Deeds, developed a small electric motor that met the need.

Auto industry pioneer Henry Leland, head of the Cadillac division of General Motors, had a friend whose arm was broken when an auto crank kicked back.  The friend died from the resulting infection.  So Leland looked around for a better way to start cars and heard about Kettering and Deeds’ work for The Cash.  After overcoming many difficulties, Kettering developed the electric starter, which Cadillac put in all their cars.  General Motors wanted more electric starters, so Kettering and Deeds started a new company, Dayton Engineering Laboratories Company, known as DELCO.  GM bought DELCO, Kettering became the chief scientist-inventor at GM and thus a very wealthy man.  Charles Kettering went on to lead the development of the diesel locomotive and leaded gasoline, earning many patents and propelling General Motors to great success.

Edward Deeds became a leading Dayton industrialist, partnering with the local Wright Brothers in aviation and helping merge Pratt & Whitney with Boeing, creating United Aircraft and United Airlines.  After Patterson died, Deeds returned to National Cash Register to run the company in the dark days of the Great Depression.

A good friend of Kettering’s at The Cash was top salesman, and later sales manager, Richard H. Grant.  In the mid-1920s, he, too, was lured away to General Motors to join his friend Kettering.  While Grant gets too little credit in most history books, his application of what he learned from Patterson was key to GM passing Ford in sales in the late 1920s.  Many innovations in projecting sales levels and supporting dealers (unlike Henry Ford) became key to GM’s success.  Grant continued as GM’s top sales executive and a member of the company’s board of directors (alongside Kettering) into the 1940s.

Yet the most important, or at least most famous, of Patterson’s proteges was top National salesman and later sales manager Thomas J. Watson, Sr.  In 1914, Watson was hired away from National to run a small maker of office equipment, the Computing-Tabulating-Recording Company.  Watson renamed the company after its Canadian subsidiary, the International Business Machines Company.  He and his son Thomas Watson, Jr., built IBM into the greatest information technology company in the world.

Over the years, rebranded as “NCR,” the company continued to dominate the retail cash register business.  The company entered the banking equipment business, which is today the largest generator of company revenues and profits.  NCR claims to be the largest maker of ATM’s but derives most of its revenue from selling software and services.  NCR, now relocated to Atlanta, is also a powerhouse in retailing and restaurants.  Annual revenues are about $7 billion.

Every day, millions of people around the world interact with NCR equipment, quite a legacy for a very determined, obstinate, difficult man.  Yet John Patterson’s greatest legacies are the sales systems he developed and the many great companies that applied and adapted his best ideas.

(For more on the history of office machines, see this article.)