For History Lovers: The Deep Roots of Business 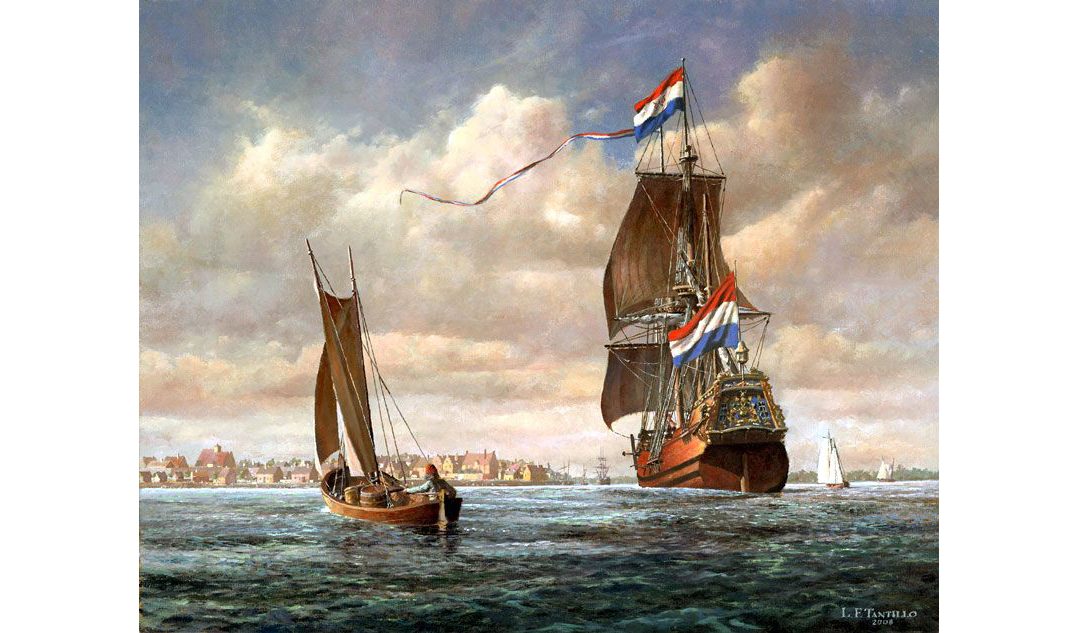 Entrepreneurship and business are at the core of modern life.  Both have given us many great innovations and improvements in life and prosperity.

We at the American Business History Center understandably focus our efforts on the United States, particularly “recent” history (the last two hundred years!).  It is easy to think that all the ideas, innovations, and techniques of business were invented in America, or in that “recent” time span.  Yet a deeper study of history, extending well beyond the United States, teaches us that many of the key concepts and practices have been around for centuries, even millennia.  A true understanding of how we got to where we are today requires that we follow that deep history.

My own education tended to make me think that ancient civilizations – the Babylonians, Phoenicians, Egyptians, Greeks, and Romans – were only about pyramids, mummies, mythology, and political empires.  I don’t recall my history teachers talking much about “business deals.”  Yet, especially in the last twenty or thirty years, scholars have dug up more clay tablets and other indicators of vibrant business cultures, even thousands of years ago.

Throughout world history, trade between nations and city-states has been critical.  The Egyptians of the Nile Valley did not have much timber, whereas the Phoenicians from present-day Lebanon had their famous cedars.  Hence began one of the greatest trading empires, the Phoenicians, who unlike most of their neighbors would rather trade than conquer.  Sailors learned to follow the stars and make maps in large part to facilitate trade, which was a force for peace and cultural interchange, as it still is today.  Advances in mathematics were needed to figure taxes to be paid to the king and to figure the revenues, expenses, and profits of traders and other entrepreneurs.

For those readers interested in learning more, we have compiled the following notes on some fascinating books.  Note that most of these books are “serious” or scholarly books – ones full of footnotes, references to academic studies, and bibliographies. A few, as noted, are written more for the general reader, focusing on storytelling, not just the “dry” facts.  You can read these notes and use the “look inside” feature on online bookselling sites to decide for yourself which books you might the most enjoy and learn from.

Money Changes Everything: How Finance Made Civilization Possible, by William Goetzmann (2016), is what reviewers call “a magisterial book.”  That is, an amazing and comprehensive, original study.  I found every page very interesting.  While the title says “finance,” finance broadly defined underlies all business enterprise.  How is the money raised?  How are partnerships formed?  Goetzmann starts with the earliest Babylonians and Greeks and works his way through innovations in China and Italy, where double-entry bookkeeping was invented, right up to the present day.  The Sumerian Enmetena “cone” (a tablet), dating from about 2100 BC, shows a form of business plan (and advanced mathematics).  Five hundred-plus pages of fascinating, well-told history, this is my number one book on this list, although each takes a slightly different approach to “business history.”  Goetzmann and other authors cover some of the same material in this more expensive, beautifully illustrated, older book:  The Origins of Value: The Financial Innovations that Created Modern Capital Markets, edited by William Goetzmann and Geert Rouwenhorst (2005).

Foundations of Corporate Empire: Is History Repeating Itself?, by Karl Moore and David Lewis (2000), is a great book, a survey of “big business” from the ancients through the twentieth century.  The book moves along rapidly and does not go into as much “dry” detail as some of the others.

Birth of the Multinational: 2000 Years of Ancient Business History, from Ashur to Augustus, by the same authors, Karl Moore and David Lewis (1999), is an awesome book that delves more deeply into the details of business in the earliest days.  Check it out for a deep dive into the business lives of the Assyrians, Phoenicians, Babylonians, Greeks, and Romans.

The Origins of Business, Money, and Markets, by Keith Roberts (2011).  I really enjoyed the storytelling in this book, which focuses on the Greeks and Romans, but also goes backward to 1600 BC and beyond.

The Invention of Enterprise: Entrepreneurship from Ancient Mesopotamia to Modern Times, edited by David Landes, Joel Mokyr, and William Baumol (2010) was written, compiled, and edited by some of the foremost economic historians.  This detailed book contains individual chapters on key steps in the evolution of entrepreneurship.  It covers the complete history, from the ancients through the present day, with scholarly articles on the rise of big corporations in the “early modern period” (defined by historians as from about 1500 to 1800), on the industrial revolution, and on modern times.  Excellent for the serious student of history and business.

A Brief History of Entrepreneurship: The Pioneers, Profiteers, and Racketeers Who Shaped Our World, by Joe Carlen (2016), is a thin book that reads quickly, touching on a diverse set of characters from the ancient Phoenicians to Al Capone and Warren Buffett.

A Splendid Exchange: How Trade Shaped the World, by William Bernstein (2008), is written for the general reader and the winner of multiple “best book” awards.  This is the fascinating story of global trade from ancient times to the present.

Cross-Cultural Trade in World History, by Philip Curtin (1984), is a scholarly book that is a bit less “Euro-centric” than some of the others, covering Africa, Asia, and South America as well as the “Western” world.

A Concise Economic History of the World: From Paleolithic Times to the Present, by Rondo Cameron (2015).  If you want to knit all this together, learning the story of the global economy in one volume, this is the book.  Cameron starts in the ancient world and works around the globe to the modern age.

The Ordinary Business of Life: A History of Economics from the Ancient World to the Twenty-first Century, by Roger Backhouse (2001).  There are many histories of the study of economics and biographies of the great economists.  Most begin with Adam Smith, who wrote his famous book The Wealth of Nations in 1776 and is usually considered the “father” of modern economics.  But Backhouse’s excellent book does not get into Smith until one-third of the way through the book, after he starts in ancient times and covers Aristotle and the Greeks and every aspect of thought about economics before Smith.  This is a great education for anyone interested in the field of economics.

After the collapse of the Roman empire around the year 500, the “dark ages” began.  While not everything went dark – better terms are the “Middle Ages” or “Medieval Era” – business practices did not seem to advance much.

Then, as the world crossed into the second millennium in 1000, business and trade ramped up again, led by the city-states of Northern Italy.  The merchants and traders of Venice and Genoa and families like the Medici in Florence created much of the modern accounting system, including the debits and credits of double-entry bookkeeping.  The textile cities of Bruges, Ghent, and Antwerp in Flanders (now Belgium) rose to importance, as did the Hansa cities (or “Hanseatic League”) of Northern Germany and the Baltic Sea.  All these cities and business empires had branches throughout Europe and sometimes reaching east to Constantinople (now Istanbul) and beyond.

Power and Profit: The Merchant in Medieval Europe, by Peter Spufford (2002) is perhaps the best book on Medieval business for the casual reader, because it is beautifully illustrated, unlike most of the other books in this list.

Gold & Spices: The Rise of Commerce in the Middle Ages, by Jean Favier (1998) is another comprehensive study of the times.

The Richest Man Who Ever Lived: The Life and Times of Jakob Fugger, by Greg Steinmetz (2015) engagingly tells the story of the remarkable Fugger (rhymes with “cougar”) business empire, based in Augsburg, Germany.  The Fugger family started in mining but eventually became the most important traders and moneylenders in Europe, even financing emperors and their armies.  The Fuggers even had their own news network to stay informed about “global” developments.

The first great company with “publicly traded” stock and many stockholders was the Dutch East India Company, founded in 1602.  The British soon followed with their own East India Company, also created as a tool for colonization and exploitation.  While the nature and goals of corporations have changed dramatically in the intervening years, these were the first big corporations.  If you want to go deeper on these origins, start with these two fascinating books:

Anyone interested in overall world history, not just business history, should look into the wonderful trilogy written by the great historian Susan Wise Bauer; few storytellers are better:

The History of the Ancient World: From the Earliest Accounts to the Fall of Rome

The History of the Medieval World: From the Conversion of Constantine to the First Crusade

The History of the Renaissance World: From the Rediscovery of Aristotle to the Conquest of Constantinople

Bauer’s work is reminiscent of the famous series of books written in the 1960s and 1970s by husband and wife Will and Ariel Durant, including their very short book on the lessons they learned from studying history:

The Lessons of History, by Will & Ariel Durant.

Lastly, the wonderful one-volume history of Western Civilization by one of its greatest scholars, William H McNeill:

The Rise of the West: A History of the Human Community, with a Retrospective Essay

by William H. McNeill. (If you want more book recommendations, on any aspect of business, industry, or company history, please email me at gary@americanbusinesshistory.org and I will dive into my enormous library and see if we can find some recommendations for you!)