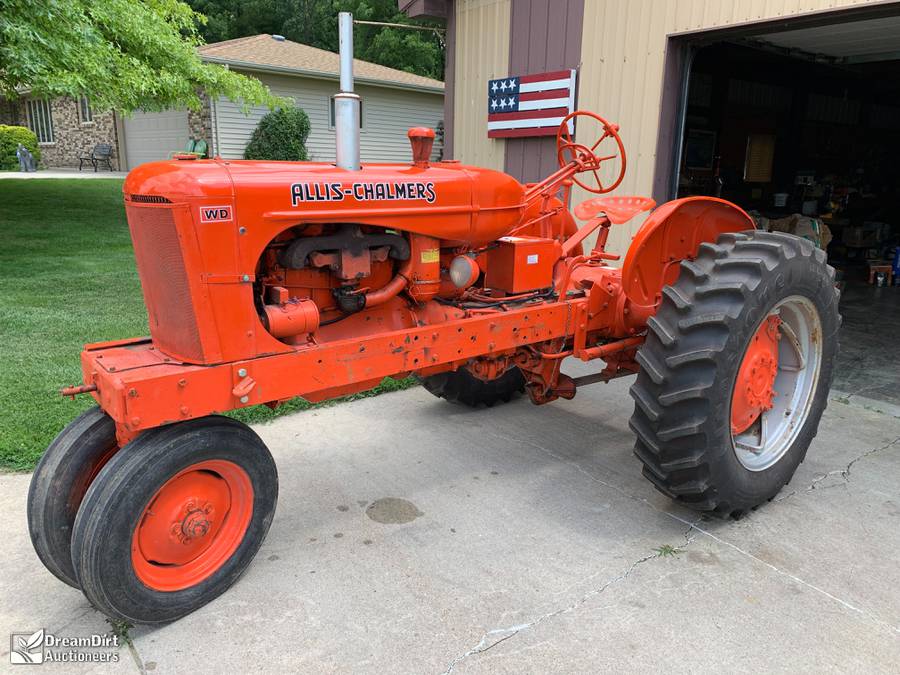 Our business history articles often focus on the consumer products and services industries with which we all interact – from auto companies to department stores.  Yet it’s important not to forget the industrial companies that lie in the background, and make all this possible – U.S. Steel, Dow Chemical, Boeing, and many others.  Some of these companies, like General Electric and Westinghouse, serve or served both industrial customers and consumers.

One of the most interesting of these was the Allis-Chalmers Company of West Allis, Wisconsin, just outside Milwaukee.  This great company was one of the pioneers of the industrial age in America and around the globe.  Allis-Chalmers built the engines that ran our factories: in 1900, they were perhaps the largest maker of steam engines in the world.  Over time, they expanded into almost every type of engine and machine, using the slogan “Ours the Four Powers: Steam, Gas, Water, Electricity.”  The company made everything from giant turbines for power plants to the more familiar orange farm tractors.  Allis-Chalmers was a continuous inventor and innovator in these fields.

Throughout the first half of the twentieth century, they were one of the one hundred largest American manufacturing companies.  In the early 1950s, Allis-Chalmers’ 30,000+ employees generated more annual revenue than IBM.  The company was as big as the two largest pharmaceutical makers combined (American Home Products and Johnson & Johnson).  It was also larger than 3M and Coca-Cola combined.  Yet by the late 1980s, Allis-Chalmers had sold off its major business components, and in 1999 closed completely.  Here is a very brief look at this formerly great company’s history.

Edward P. Allis was born in Cazenovia, New York in 1824.  After graduating from Union College in New York state, he and his college roommate migrated to Milwaukee where they began a leather tanning operation in 1846.  Ten years later, Allis decided to sell his share of the partnership, just before the “panic” (recession) of 1857.  He waited out the financial crisis, getting back into business in 1861 by buying the Reliance Works, a troubled maker of flour mills and sawmills, at a bankruptcy auction.  Reliance had declined from forty workers to twenty, but Allis saw opportunity in its plant and machinery.  Profits rose during the Civil War.  By war’s end, Allis employed seventy-five men.

By 1871, Milwaukee’s city leaders needed a new water system, including a 21-milllion gallon reservoir, pumping stations, and miles of pipe.  Allis’s Reliance Works was awarded the pipe contract, for 2,600 tons of iron pipe.  Allis built a $100,000 pipe foundry, the first in the city, to fulfill the order.  The financial burden led to the company’s insolvency in the panic of 1873, but Allis prevailed and kept his company, now renamed Edward P. Allis & Company, intact and under his control.

Allis, who was primarily focused on the business and finance side of the works, began to hire the best specialized engineering minds he could find.  He wanted to ensure that every product the company made was the best.  In 1873, he hired George Hinkley, a specialist in sawmills.  Hinkley perfected the commercial bandsaw, enabling much higher productivity in the booming lumber industry of the northwestern US.

In 1877, Allis added William Gray, an expert in flour mills.  At the time, flour was milled using millstones, but Gray was interested in the new roller mill concept from Europe.  Gray licensed this technology and improved on it.  In addition to being more efficient, roller mills did a better job of turning the plentiful and cheap spring wheat found in the northwest states into flour, making it more competitive with the easier-to-mill winter wheat found further south.  Gray, overcoming great skepticism, convinced the two leading flour millers of Minneapolis, Washburn-Crosby (later called General Mills) and Pillsbury, to give the new roller mills a try.  Soon, the Minneapolis millers converted to roller mills and the city surpassed St. Louis as the nation’s flour capital.  The Allis company became the largest maker of flour milling machines and had trouble keeping up with the demand.

Allis’s third great hire, his most important, was Edwin Reynolds in 1877.  Reynolds had worked for George Corliss, builder of the giant Corliss steam engine that was all the rage at the 1876 Philadelphia Centennial Exposition, one of America’s first great “world’s fairs.”  Allis, unlike George Corliss, promised Reynolds a free hand in developing better steam engines, which he promptly achieved.  Reynolds engineered huge “blowing engines” which forced air into the blast furnaces used by the steel industry.  Giant Carnegie Steel, the predecessor of US Steel, was soon using thirty-one of these engines.

The Allis company continually expanded, buying more land and building more factories.  They created the city of West Allis.  The company expanded into a dizzying array of products and parts, including gas engines.  Over time, they established sales offices around the world, exporting literally tons of large machinery.

By 1889, when Edward Allis died at the age of sixty-four, his company had 1500 workers.  It was the nation’s largest maker of flour mills, a key competitor in sawmills, and most importantly, a giant in steam engines.  While three of Allis’s twelve children held executive positions, the company also had the talented executives and engineers that Allis had assembled, led by Edwin Reynolds.

In 1901, at the instigation of Edwin Reynolds, the Edward P. Allis Company put together a new company, Allis-Chalmers.  The Allis company was merged with Chicago’s Fraser & Chalmers, a major maker of mining equipment; the Gates Iron Works, also of Chicago, a maker of ore crushing machinery; and the Dickson Manufacturing Company of Scranton, Pennsylvania, which made blowing machines and air compressors.

While Reynolds had spent his life working on steam engines, he realized that electricity was becoming the nation’s main motive force, and in 1904 acquired the Bullock Electric Company of Cincinnati.  Thus Allis-Chalmers had expertise and engineering leadership in steam, water, gas, and electric engines.

Surviving yet another fiscal crisis and bankruptcy in 1912-13, Allis-Chalmers again emerged as a strong company.

Allis-Chalmers continued to explore new product categories where its expertise could be applied.  One of these was farm equipment, an industry dominated by the giant International Harvester Company created in 1902 by JP Morgan and the McCormick and Deering families.  In 1931, Allis-Chalmers bought the faltering Advance-Rumely Thresher Company of LaPorte, Indiana.  Advance-Rumely had a good name with farmers, the very successful OilPull tractor line, and a national network of dealerships.  This thrust Allis Chalmers into being the fourth-largest maker of farm implements, after International Harvester, John Deere, and the JI Case Company of nearby Racine, Wisconsin.  The company soon adopted bright orange as the color for its farm tractors to differentiate them from the competition.  Their tractors added many innovations, including pneumatic rubber tires.

In the ensuing years, Allis-Chalmers was a major competitor in farm implements, construction machinery, and engines of every type.  It contributed generators to Hoover Dam and many other big projects.  The company even developed one of the first particle accelerators, the Betatron, developed at the University of Illinois in 1940.

Over time, Allis-Chalmers’ fundamental strategic weakness began to take its toll.  While the company seen as a whole was one of America’s largest, it did not “dominate” any of its major markets.  In power equipment, the company was smaller than General Electric and Westinghouse.  Caterpillar, a smaller company in the 1950s, jumped into the lead in construction equipment.  And in farm equipment, Allis-Chalmers was usually fourth biggest.  Being number three or four meant higher distribution and marketing costs and lower factory productivity.

As hard as the company worked to stay alive, it all unwound in the 1970s and 1980s.  Allis-Chalmers offloaded its construction equipment to a partnership with Italy’s FIAT.  They spun the farm equipment businesses off to a partnership with Germany’s Deutz; this ended up as today’s American company AGCO, a strong competitor.  The power business was turned into a joint venture with the great German electrical company Siemens, becoming Siemens-Allis.  Over time, Allis-Chalmers sold out its interest in all these partnerships and finally dissolved in 1999.

Yet even today, engines built by Allis-Chalmers continue to power factories and power plants all over the world and collectors prize vintage Allis-Chalmers’ orange tractors.  Over a period of one-hundred-and-thirty-eight years, Allis-Chalmers employed tens of thousands of people and followed an arc from dust to dust but left a lasting legacy of excellent engineering and products around the globe.

We invite you to share your thoughts and questions here on LinkedIn.

As always, we appreciate your time and interest. Please pass this along to anyone you think might find it of interest. Donations to support our cause, learning from business history, are always welcome!