At the American Business History Center, we continually seek new sources of information on business history.  We have put a lot of links to other history websites on our links page.

A little over a year ago, we dug up and uploaded 125 old business history books and government reports.  The week of August 20, 2021, we added hundreds more books, but have not listed or described the new additions below.  However, you can browse through all of them, read them, and hopefully be able to download them directly from this link.  The files include more recent annual reports and a diversity of business information sources, old and new.

These resources are great ways to see where your grandparents worked, if a factory existed in your hometown, which company owned the factory, where the railroads ran, ads for art inspiration or marketing ideas, or just the pure joy of nostalgia.

To download any of the books listed below, just click on the book link, which will take you to that book our dropbox account.  In the upper right corner, you will see a little down arrow in a box, as shown in the picture below.  Click on that arrow, and you will have the option to “Direct download” to your computer.  Let us know if you run into any issues! 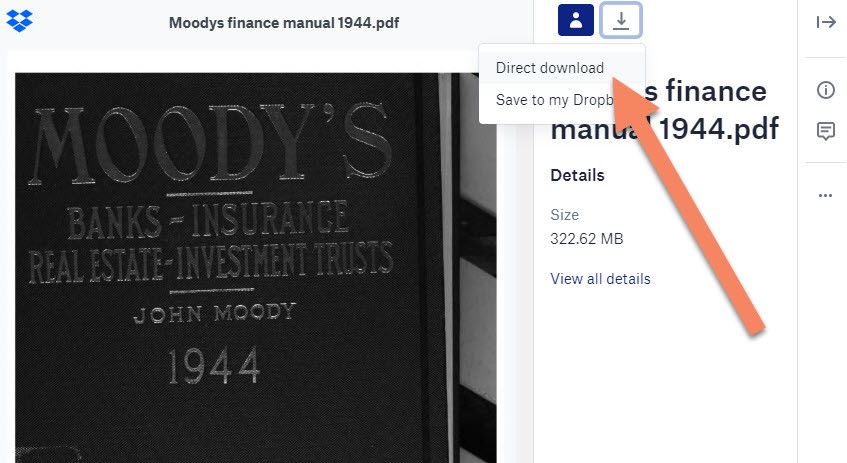 These books have been gathered from Google Books and other sites.  They fall into four categories:

At the bottom of the list, we have included a few very cool books on general history, including two British atlases and a book about the 1893 Chicago World’s Columbian Exposition.

Some of the documents are 1,500 to 2,000 pages or more, so they may take a while to download, depending on your Internet speed.  Once you open a document in your PDF reader, you might have to wade through a few blank scans at the beginning of each book, and some of the scans are higher quality than others.  The Adobe PDF reader is available free here.

Our own favorites are marked with *****.  Let us know which of these categories you find most interesting, and we will focus our search for more books or magazines like them!

75 Years of American Finance*****
This is a great old chart showing the ups and downs of the economy and stock markets through America’s earlier history.

Men Who are Making America 1917 BC Forbes*****
Millionaires and Kings of Enterprise 1901*****
Two wonderful books full of biographies of the most important and interesting business leaders at the time.

Forbes Epigrams 1922
More from BC Forbes, the founder of Forbes magazine.

The Truth about the Trusts John Moody*****
John Moody, the founder of Moody’s Manuals, was one of the first people to look hard at big companies other than railroads.  The great trusts of the 1890s represented the first of the three big merger eras in American business history, the others being the roaring 1920s and the conglomerate era of the 1960s.  In this awesome book, Moody goes through each of the trusts – even the tin can and thread trusts – listing all the companies that were merged, as Wall Street financiers tried to monopolize industries, often unsuccessfully.  A treasure trove.

One Hundred Years of American Commerce 1795 to 1895*****
One of our all-time favorite books, full of illustrations.  An expert from each industry wrote an article on that industry, all edited by Chauncey Depew, Cornelius Vanderbilt’s attorney, President of the New York Central Railroad, and Senator from New York.

History of Manufactures in the United States 1607 to 1860 Clark*****
The first of three volumes but the only one we could find online.  Excellent, detailed histories of each industry, often describing the key companies and their founders.

These are particularly beautiful, with great ads and articles.  They include articles and ads about impressive hotels, theaters, and many other building types.

American Stationer and Office Outfitter 1923
All about office supplies and furniture – before the computer!

American News Trade Journal 1924
Distributed to all the newsstands in America by the giant magazine and newspaper wholesaler and train station newsstand operator, the American News Company.

Hendricks Commercial Register 1891
Thomas Register of American Manufacturers 1905*****
Outstanding lists of all the factories in America, organized by the products they produced or sold.

McGraw Electric Railway Manual 1903
All the amazing electric railroads that served America, including high speed “Interurban” lines between the cities.

Official Guide of the Railways 1912*****
Official Railway Guide 1882*****
Official Railway Guide 1898*****
This wonderful monthly publication listed all the railroads in America, with maps of their routes and complete timetables.  Every frequent traveler and every depot had a copy.  1882 was relatively early in the expansion of the US rail system; it was pretty much complete by 1912, with American rail mileage peaking around 1917.

Moving Picture Annual and Yearbook 1912
Very early in the industry; a great book.

Crain’s Market Data and Directory 1923*****
Packed with data and lists of magazines and other information sources on every industry.

ALL of the following reference books get ***** from us researchers!

Henry Poor was the first man to consolidate information on companies, beginning with railroads in the 1860s.  His books were full of maps and incredibly detailed information about every railroad, who owned it, and on and on.  Then, by 1900, other companies (“industrials”) began to sell shares to the public, though the markets were still dominated by the railroads.

The Manual of Statistics was an early annual book that began to compile the data beyond railroads, but John Moody took it to another level with his first volume in 1900, included here.  Moody’s later broke its fat books – up to 3000 pages long – into separate volumes on railroads (or transportation), industrials, utilities (including telephone companies), banks and finance (including real estate and hotels), and government and municipal securities.  We have tried to include examples of each.

It is great fun to look up some old company, then browse through the surrounding pages to discover interesting companies you never heard of!

Report on Motor Vehicle Industry 1940*****
This is the best source for information on the revenues and profits of General Motors, Ford, and Chrysler in their early years.  Ford did not sell stock until the 1950s, after Henry Ford died, so this information is hard to find anywhere else.

The Structure of the American Economy 1939*****
This great book has lists of the largest companies in America at the time, plus lots of other great data.

Chain Store Investigation 1935*****
One of the most thorough studies of retail chains.

Look through these to find industries of interest to you:

Wacker’s Manual of the Plan of Chicago 1916*****
In 1909, the great architect and city planner Daniel Burnham created a remarkable plan for the City of Chicago, some of which changed the look of the city in the following decades.  His associate Wacker created this shorter summary of the plan.  Wacker’s Manual was distributed to school children, businesspeople, and other citizens throughout Chicago to generate support and enthusiasm for the plan.