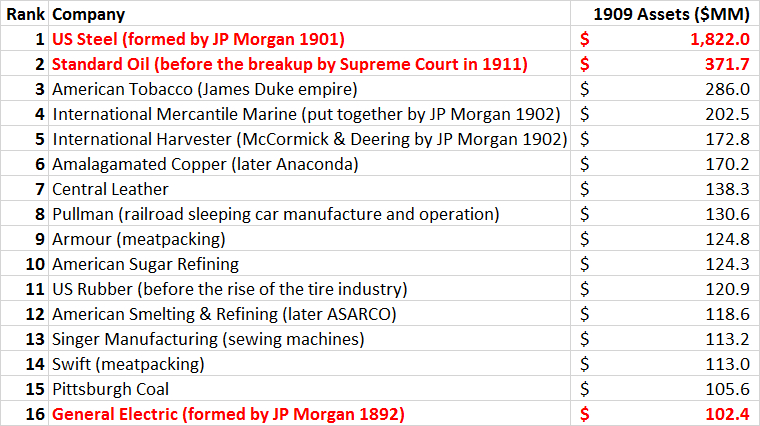 A careful study of this week’s list will show you the huge American industries which once dominated stock markets, employment, and community life, but which are not as important in the age of Amazon and Google.

Our readers know we love lists.  There are few other ways to learn as much as efficiently.  Going down the list and thinking about the implications and lessons is always worthwhile.

In our years of searching, the oldest list of America’s largest companies that we have found dates from 1909, covering the 100 largest “industrials.”

In the early days of the US stock market, railroad stocks dominated.  There were very few “other” types of companies which offered their stock to the public, to investors outside the founding family or owners.  By 1900, John Moody felt there were enough non-railroad stocks to produce his first stock market reference book covering “industrials.”  The definition of “industrials” gets a little odd, as it includes shipping companies and retailers, but excludes railroads, telephone and telegraph companies, electric and gas utilities, banks, and insurance companies.

The lists below were compiled from those old financial reference books and published in 1954.  Note that companies did not have to report their sales, the normal measure of size, until the federal securities acts of the 1930s.  In 1929, only about half of the largest companies revealed their revenues.  So these early lists used assets, a readily available number, in ranking the largest companies.

Reviewing this list of the 100 largest “industrial” corporations, note that the 9 corporations in red are the only ones still standing as independent companies today.  Even most of those have significantly changed.

General Electric has sold off many of the core businesses of 112 years ago, such as lighting and appliances.  Sears, Roebuck barely exists today and Eastman Kodak is struggling to come back to life.  American Express and Wells Fargo were express companies, essentially the UPS and FedEx of their era, and only later transitioned to become financial service companies.  (Note that the present Wells Fargo bank is not actually the same company, but was acquired by another bank which adopted the Wells Fargo name.)

John Rockefeller’s Standard Oil trust was soon broken up by antitrust action, resulting in thirty-four new companies, the largest of which, Standard Oil of New Jersey, ultimately became Exxon and then ExxonMobil.

That leaves US Steel, International Paper, and Pittsburgh Plate Glass (PPG) as the only other companies among the top 100 of 1909 which today are in much the same industries as they were 112 years ago.  One must admire their persistence and longevity.

We cannot help but notice, as shown in the first column, the importance of JP Morgan’s efforts to consolidate industries into giant firms during the 1890s and early twentieth century.  He believed a stable economy was best achieved by merging the largest firms into one giant firm, a “trust,” eliminating “wasteful competition” and price wars.  This boom touched on almost every manufacturing industry – note in the list both American Thread and the short-lived Central Leather, among many others.

When this same asset-based “top 100” list was compiled ten years later, in 1919, 47 of these 100 companies were no longer on the list, a rate of turnover not seen in more recent times.

Part of this turnover resulted from the failure of many of those same efforts to monopolize industries.  There is always an entrepreneur or group of investors ready to underprice the “trust.”  In addition, both Standard Oil and American Tobacco were split up by antitrust action, creating dozens of new companies on the follow-up list.  And Morgan’s giant transatlantic shipping powerhouse International Mercantile Marine was in part sunk by the failure of the pride of the fleet, the Titanic.

Another development was the beginning of the rise of the automobile.  By 1919, General Motors was ranked fifth biggest, Ford Motor seventh, Studebaker seventy-third, Maxwell Motor (which later evolved into Chrysler) eighty-seventh, and Packard Motor ninety-first.  Goodrich, Goodyear, and Firestone also joined the list, as tires became one of the nation’s most important “consumable” products.

By 1919, more consumer-oriented companies also began to appear in the top 100, including Procter & Gamble, FW Woolworth, Montgomery Ward, canner Libby McNeill & Libby, and United Drug.  Over the next 100 years, consumer products and services including retailing, food and beverages, media, entertainment, lodging, airlines, and healthcare would play an ever-increasing role in the US economy.

You can see the latest lists of the biggest American companies here and the biggest in the world here.