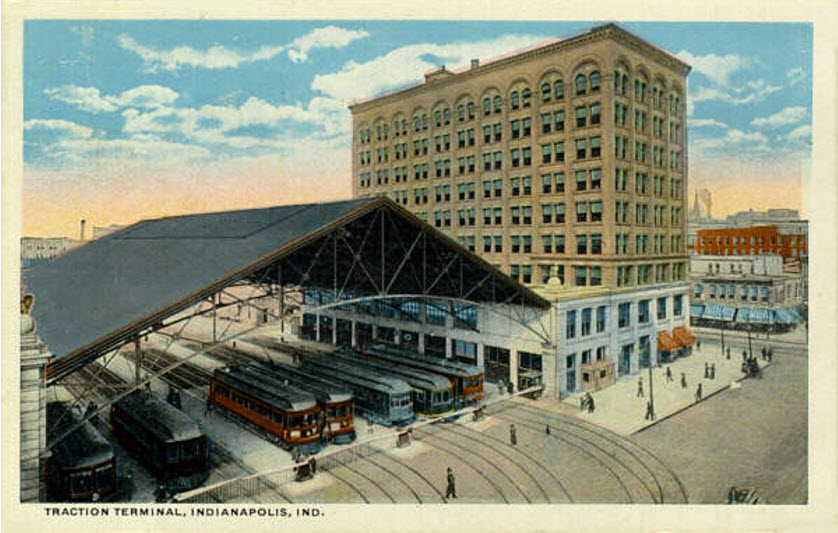 I grew up in Anderson, Indiana, which played a special role in the development of America’s original high speed all-electric railroads, the interurbans.  Here is a quick look at that story, which reflects one man’s obsession with a new technology, perhaps with lessons for us today.

By the 1880s, inventors including Thomas Edison were working hard on a better system of streetcars.  The horses used to pull streetcars along the rails laid down city streets had their drawbacks: it took large numbers of them, they were expensive to feed, not always reliable, massive producers of excrement, and sometimes frightened.  In 1872, an equine epidemic (“the Great Epizootic”) had swept the nation: 2,250 horses died in Philadelphia in three weeks, and in New York, an estimated 18,000 horses were dead or too ill to work.  After a series of technological breakthroughs, electric streetcars arrived.  In 1890, 90% of streetcars were horse-drawn.  By 1902, 97% of American street railway mileage was operated electrically, by cable cars and third rails in some places, but more often powered by overhead trolley and wire systems.

During this same era, rural America became more connected to the cities.  Agriculture boomed through better education at land-grant universities, national magazines appeared which unified the culture, and rural free postal delivery began, connecting rural Americans with the nation like never before.  Hence the city streetcar systems began to extend their lines into the nearby countryside.  These systems at first ran at about 15 miles per hour, but travelers needed faster travel between cities, especially the smaller towns which were infrequent stops on the mainline “steam” railroads or were not on those lines.

By the late 1880s and early 1890s, many experiments, especially in Cleveland and around Ohio, led to faster intercity travel on custom-built rural electric lines – up to 70 miles per hour.  The same cars could be run through the streets of cities at slower speeds before and after accelerating through the countryside.

Enter into this picture Charles L. Henry, born in 1849 in Hancock County, Indiana, the son of an Irish immigrant and a Virginian mother.  Raised in historic Pendleton in Madison County near Anderson, Henry attended Asbury University (later renamed Depauw) but graduated from the Indiana University Law School in 1872.  He then began a longstanding law practice in Anderson.  By 1880, he was a prominent citizen of the city, elected to the Indiana state Senate.

During this same era, the discovery of natural gas in the underground limestone formations of east central Indiana revolutionized the local economy, previously dependent upon agriculture.  Gas was discovered near Eaton in neighboring Delaware County, and in 1886 the first successful well was dug there, striking gas 922 feet below the ground.  Burning off the excess, the flames rose up ten feet and drew crowds for weeks.  By 1892, hundreds of gas wells covered a 2,500-square-mile area of Indiana, then the largest gas field in the world.  With access to cheap energy, manufacturers rapidly moved to Indiana or built new factories there.  Among them were the Ball Brothers from Buffalo, New York.  They moved their nationally-famous glass canning jar business to Muncie in Delaware County in 1887 and 1888, later giving rise to Ball State University and Ball Memorial Hospital.  Anderson and other cities saw the rise of hundreds of factories as well.

In 1891, Charles Henry acquired the “mule car” streetcar system in Anderson.  Observing the rise of electric streetcars in other cities, Henry converted the system to electricity the following year, retiring the mules.  His enthusiasm for electric transit was heightened when he saw the electric railway that wrapped around the 1893 World’s Columbian Exposition in Chicago.  Henry began to see new possibilities.  The national economic depression of 1893 slowed his increasingly ambitious efforts, but by 1897, he had twenty-one electric streetcars running on eleven miles of track inside the city of Anderson.  Continuing his rise in prominence, Henry was also elected to the United States Congress in 1894 and again in 1896.

While the term “interurban” had been used before, it was Charles Henry who made it popular.  He organized Indiana’s first interurban, the Union Traction Company of Indiana, from Anderson to nearby Alexandria in 1897.  Henry’s Union Traction soon stretched to Indianapolis, Marion, Muncie, and Kokomo, with frequent (often hourly) high-speed intercity service as well as running city streetcars.  (My parents lived in neighboring counties and rode the interurban on dates in the 1930s.)  I have been told that the electric powerhouse in north Anderson was the largest powerplant west of Niagara but have not been able to confirm that; in any case, it was a big one, powering both intercity and street lines throughout the region.

Union Traction continued to expand over the northeastern quadrant of Indiana.  Expansion was not always easy, with the steam railroads sometimes refusing to allow interurban tracks to cross their own, older tracks.  The company built a fine headquarters building in downtown Anderson, still an architectural gem, as well as extensive shops next to the powerhouse.  The company carried freight and express packages, but most of its business was done by carrying people.  In 1917, Union Traction carried almost twenty million passengers.  Cars ran eighteen times a day each way between Anderson and Indianapolis, in as little as one hour and eighteen minutes including slower running on city streets at both ends.

Including construction by other companies, the interurban network in Indiana grew to over 2,400 miles of track. Indianapolis soon became the most important interurban junction in the nation. Famed Chicago architect Daniel Burnham (the Flatiron Building in New York, Union Station in Washington, D.C.) designed the Traction Terminal and adjoining office building. The terminal served up to seven million people a year, riding in and out on 500 interurbans each day.

In 1902, Henry sold the Union Traction to a group of investors including prominent Cincinnatians and wealthy Philadelphians Widener and Elkins, who bought other systems and consolidated them into a large network.  Two years later, Charles L. Henry promoted and organized the Indianapolis and Cincinnati Traction Company, running it for the next twenty-three years.

Dozens of interurban companies were created around the turn of the century.  If one was patient and willing to change lines frequently, he or she could travel by interurban all the way from Sheboygan, Wisconsin, to Albany, New York.

Charles Henry became one of the most important believers in this “wonderful technology.”  He led the formation and later became President of the Central Electric Railway Association (CERA), consisting of the leading interurbans of Indiana and Ohio.  As is common in most industries, there were hurdles.  State governments came to believe that the steam railroads’ prices were too high, and passed laws limiting them to charging passengers two cents per mile.  While most states excluded interurbans from the onerous laws, members of the CERA had to lower their prices in order to stay competitive, bankrupting some of them.  Henry and the other CERA members tried many innovations, including selling coupon books which allowed passengers to travel on any member line throughout the region if they bought a prepaid book ($12 worth of travel for $10).

The greatest challenge to the interurbans was the gradual, then quickening, rise of the automobile.  Before Henry Ford brought out the Model T, “automobiling” was considered a rich person’s hobby.  Just a few years earlier, the “bicycle craze” had swept America, but the fad quickly died down, ruining numerous early bicycle makers.  Many in the interurban industry thought the same would be true of the very expensive new horseless carriages.  Besides, the dirt roads were muddy, dusty, or frozen for much of the year, gasoline could be hard to find, and cranking the engine could be dangerous.

Ever the enthusiast for his technology and optimist for his industry, in a 1916 speech to CERA members (at about the peak in interurban use), President Charles L. Henry said, “The automobile has of course come into the transportation field to stay and will continue to fill its legitimate part, but the ‘fad’ feature of automobile riding will gradually wear off, and the time will soon be here when a very large part of the people will cease to think of automobile rides, and the interurbans will carry their old time allotment of passengers.”

But such was not to be.  The industry visionary had become the defender of a dying system.  Charles Henry died in 1927.  Five years later, his own Indianapolis and Cincinnati line was shut down and replaced by buses (“motor coaches”).

In 1930, former assistant to Thomas Edison and Chicago utility magnate Samuel Insull acquired Union Traction as the most important part of his Indiana Railroad, the largest interurban system in the world.  But the rise of better highways, widespread automobile ownership, and the development of a more flexible intercity bus network (led by the Greyhound Corporation) meant the end of the interurbans.  With few exceptions, the systems were shut down by the start of World War II.

Sam Insull’s debt-financed electric empire collapsed in the Great Depression, leading to accusations of financial crimes, though he was ultimately acquitted.  What was left of Henry’s Indianapolis and Cincinnati, the old Union Traction Company, and the Indiana Railroad became Southeastern Trailways, an independent bus line that joined the Trailways network of smaller bus operators which combined marketing and scheduling efforts to combat the giant Greyhound operation.

Union Building and UTC Shops in Anderson, Indiana, as of September 2019:

Source: There are many great books about the interurbans, but the definitive study is The Electric Interurban Railways in America (1960), by George W. Hilton and John F. Due.