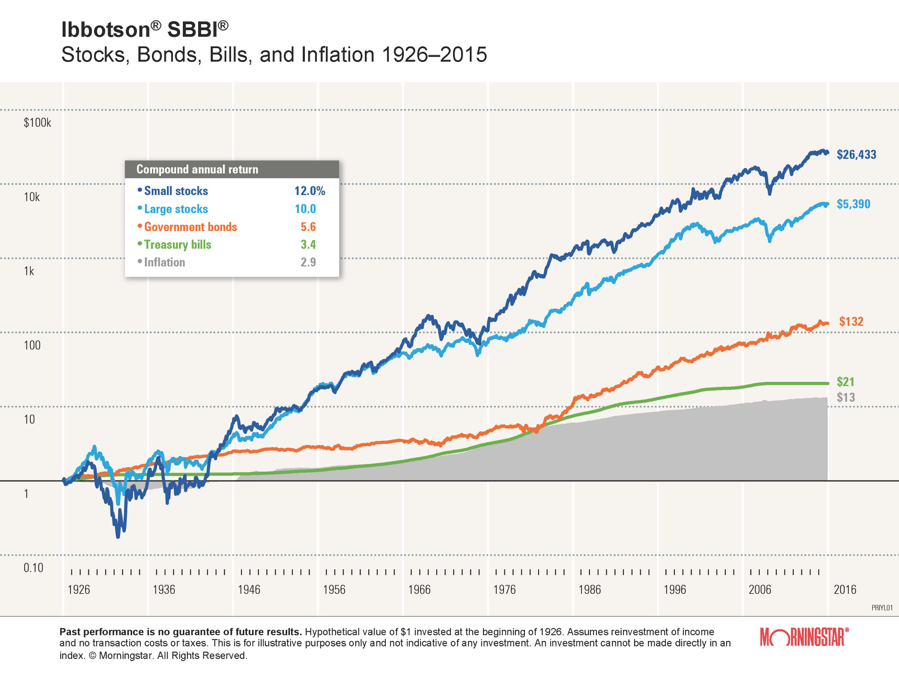 Ibbotson Associates, an investment research and data firm that is now part of the financial data giant Morningstar, Inc. (NASDAQ: MORN; mid-2019 market cap $6 billion), was founded in 1977 by Roger Ibbotson, then a young University of Chicago professor. I was its first employee, in 1979. Ibbotson gave me some “office space” on his floor. He’s an early riser and I’m a night owl, so when he left in the early afternoon, I took over his desk. Eventually, we rented some office space in downtown Chicago.

Ibbotson, with his co-author Rex Sinquefield, had recently completed one of the oddest projects I had ever heard of: collecting data on capital market returns going back to 1926, so that the authors could compare the historical returns on stocks, bonds, “bills” (cash-like, short-term U.S. Treasury obligations), and inflation (that is, a hypothetical asset returning the rate of increase of the Consumer Price Index) – SBBI for short. The research had made the two authors famous at a young age, but it was not clear how to commercialize the information. Among other things, my job was to help Roger update, enhance, and promote the SBBI database and the ideas that accompanied it.

Why was this information useful? For one thing, while investors had been investing in these assets, or assets resembling them, for centuries, nobody knew what rate of return to expect from them. They didn’t even know what rate of return had been earned on them in the past! Ibbotson and Sinquefield’ Stocks, Bonds, Bills, and Inflation answered this latter question, at least over the roughly 50-year period for which we were able to collect data.

And, by inference (and a little simple math), Ibbotson and Sinquefield were able to transform the historical returns into forecasts by assuming that the relationships between the assets’ returns, what they called risk premiums, would be the same in the future – on average – than they were in the past. Only the base rate – the interest rate earned on U.S. Treasury bonds – needed to be adjusted for current market conditions.

At least, that was the hypothesis on which Ibbotson and Sinquefield relied at the time. More recent developments have suggested that risk premiums may be time-varying, for example low when the market is high (because you’re paying a high price for future earnings and dividends, causing future returns to be lower) and high when the market is low.

Bringing risk into the equation

This insight opened up an avenue for forecasting that had not existed before. Ibbotson and Sinquefield not only measured the average return on each asset class, and on the risk premiums – they also documented all of the monthly and annual returns. Doing so made it possible to measure the variability of returns, that is, the amount of risk for which investors were being rewarded, not just the size of the reward.

By “pricing” risk in this way, Ibbotson and Sinquefield not only estimated the mean or expected return on each asset class; they also forecast the whole distribution of potential future returns. They called these extrapolations probabilistic forecasts.

We were already used to probabilistic forecasts of the weather, but in investment finance this was something really new and different. Under Ibbotson and Sinquefield’s influence, probabilistic forecasts have become standard practice in financial planning. “You have an x% chance of earning at least y%,” a phrase that would have baffled most planners before Ibbotson and Sinquefield did their pioneering work, is now heard everywhere.

The emphasis on risk, on deviation from the expectation, is the most important benefit of this approach. And it is important to focus on downside risk – how much can you lose, and how does that compare to what you can afford to lose? – as well as how much you might gain from whatever amount of risk you’re taking.

While the business was initially little more than a professor’s hobby, which made him a little money (and me a lot less), Ibbotson’s goal was to build a profitable going concern and perhaps even sell the business someday to a large financial data provider. We struggled at first to find a business focus; most of the revenue was from one-off, custom consulting jobs, the kind that professors often are asked to do.

But, one day, a young employee suggested printing the famous Ibbotson-Sinquefield historical return graph on a poster. (A sample poster is reproduced below.) The image later appeared on coffee cups, T-shirts, and in every high school economics classroom and every broker’s and financial planner’s office. More importantly, the underlying monthly return data were for sale on digital media, and the number of indexes (representing different asset classes and sub-classes around the world) grew from the original four to thousands. These are now available through Morningstar Direct, a service of Morningstar, Inc., the company that bought Ibbotson Associates in 2005 for about $80 million.

In addition, Ibbotson Associates provided 401(k) advice, one of the most marketable and valuable financial services. Such advice is used by employers to help their employees allocate among the various investment choices that are made available to them in their retirement savings plans. Ibbotson also developed optimizers (software for making portfolio choices); cost of capital estimators for appraisers, investment bankers, and regulated industries; and many other products that help professionals with investment decision-making. Ibbotson was “fintech” before fintech was a word!

Roger Ibbotson, the founder, is now 76 years old, a professor in the practice of finance at the Yale School of Management, and the founding partner of a hedge fund called Zebra Capital. He is also on the board of Morningstar, where his “baby” is a strategic business unit with its own corporate identity. Ibbotson Associates has come a long way from my office on his floor.