Living Architecture from a Dying Company 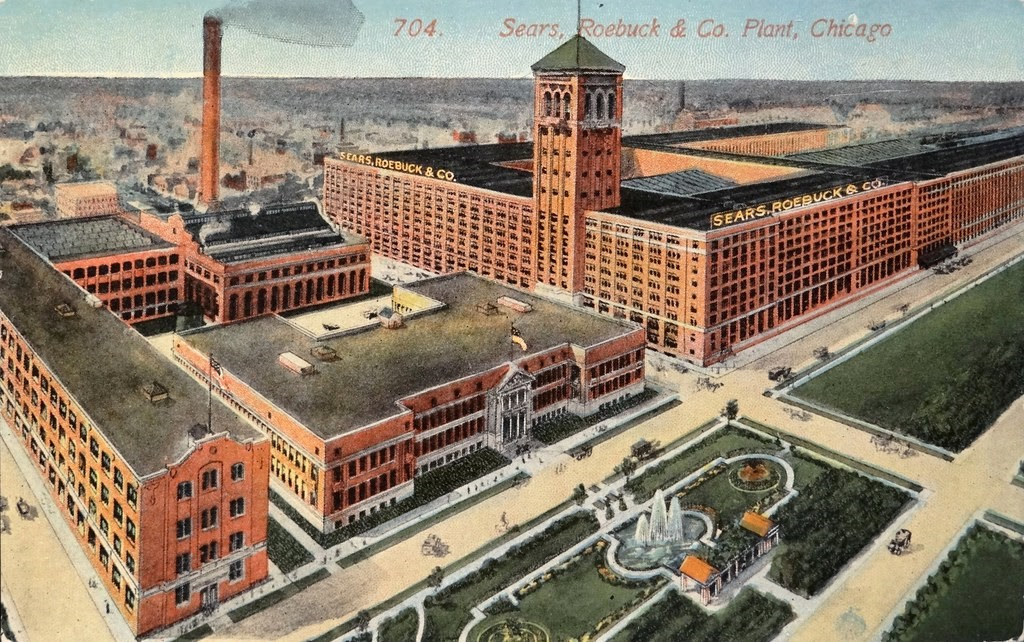 We have previously written about the rise of Sears, Roebuck to become the world’s greatest retailer.  The company’s subsequent decline now fills the headlines and is apparent across America.  Yet important vestiges, physical memorials, of the company’s greatness are more vibrant than ever.

Beginning in the 1890s, organizational genius Julius Rosenwald gradually bought control of Sears from founder Richard Sears.  In 1904 he began building one of the world’s largest industrial complexes on the west side of Chicago – 4 million square feet of offices, testing labs, and warehouses.  Beautifully landscaped, the 40-acre complex included parks and amenities for Sears’ employees.  Rosenwald was also among the first business leaders to share ownership and profits with his workers.

As the company boomed in the early 20th century, Rosenwald embarked on an ambitious system of giant “catalog plants” – regional distribution centers – across the land.  Most of these buildings were the largest in their communities, up to 2,200,000 square feet (50 acres) in floor area.  Some were also the tallest buildings in their cities.  All were sturdily constructed to stand massive weights on multiple levels.  Most included a ground floor retail store.

By the early 1990s, when Sears shuttered its catalog operation, these giant buildings had become white elephants.  What could be done with them?  They were in industrial and sometimes blighted neighborhoods.  One of the most important, in Philadelphia, was demolished.  Others sat empty, often subject to changing ownership and repeated failed redevelopment efforts.

Yet today, they have come back to life!

In Seattle, the building now serves as Starbucks’ headquarters.

In Atlanta, the plant has become the Ponce City Market in the city’s rising east side.

In Boston, it is called the Landmark Center, full of stores, offices, and a theater.

In Dallas, Southside on Lamar is full of apartments, restaurants, and offices.

In Memphis, Crosstown Concourse is reinvigorating a neighborhood.

And even at the old headquarters in Chicago’s Lawndale neighborhood, some of the buildings have been saved.  The old power plant now houses the Charles H. Shaw Technology and Learning Center.

As the years go by, future generations will not recall shopping at Sears or buying from their catalogs.  Yet these monuments to Julius Rosenwald and his main architect George Nimmons are likely to live on for decades, maybe centuries.

For the full story on Rosenwald, who also created Chicago’s Museum of Science and Industry and helped fund over 5,000 schools for poor blacks in the South, we urge you to watch this outstanding documentary film.