Most Valuable Companies: The Last 25 Years 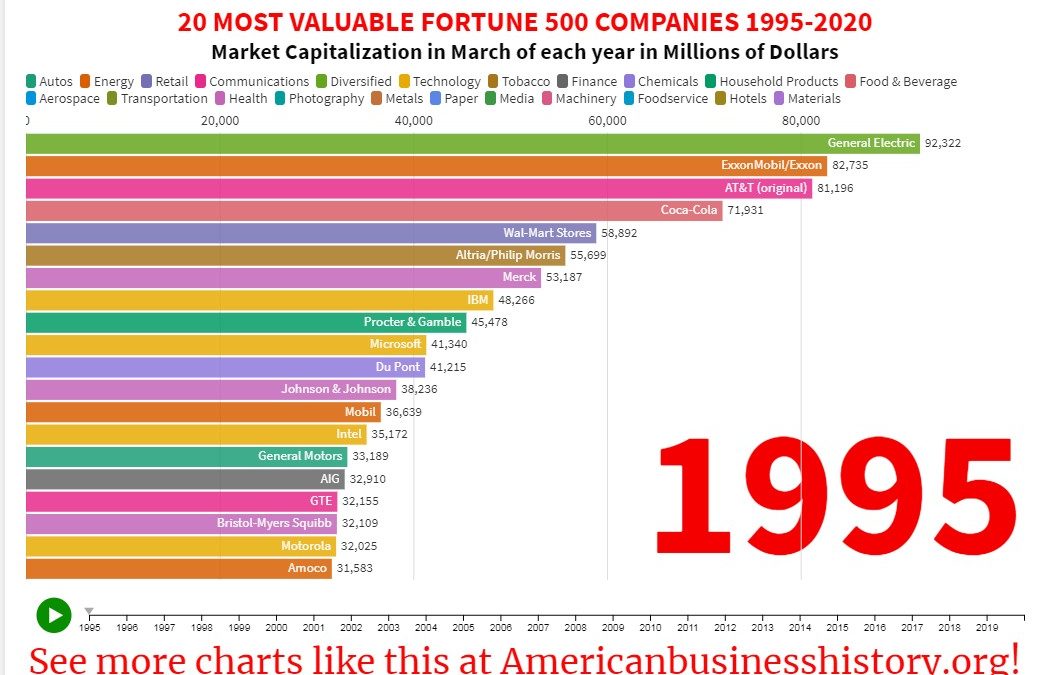 An updated 2022 version of this chart can be seen here.

On Market Capitalization as a Measure of Size or Success

Your history reporter has been studying big business for fifty-seven years (I started subscribing to Fortune magazine in 1963, when I was twelve years old).  Over the decades, we have witnessed many changes: in big industries, in which companies are on top, and on how big business is viewed and reported.

One of those many changes has been the frequency of mention of market capitalizations, the total value of all the stock in a company. Equal to how much it would cost to buy the entire company.  Fifty years ago, we do not recall any business journal or reporter even mentioning this number.  If it happened at all, it happened rarely.

Yet today, this piece of data is all the rage.  On social media and even sometimes from legitimate sources, the most valuable (highest market capitalization) companies are referred to as the “largest companies.”  Even though size, whether measured by production, revenues, number of employees, or market share, often has little relationship to value (market cap).  What changed?  Why?

One parallel change over those years has been Americans’ obsession with celebrity and with wealth.  While people studied the great American fortunes (like the Rockefellers, Vanderbilts, and Mellons) one hundred years ago, we have taken this obsession to a new level in recent decades.  The Forbes lists of the wealthiest people in America and the world, begun in the 1980s, are now best-sellers.  News media pick up on who is “ahead” each year, who rose, and who fell.

Many of those fortunes are tied to large company market values, with names like Bezos, Ellison, Buffett, Gates, Brin, Zuckerberg, and the Walton family at or near the top of the list.

If we go back fifty years, big market capitalization companies such as General Motors, AT&T, Sears, and General Electric were broadly owned by tens of thousands of shareholders, with no one person owning more than a fraction of a percent.  In many cases, a large chunk of stock was owned by employees, especially at Sears.

While many big companies still follow that pattern, there are a lot more high value companies where one person owns a large block of stock, resulting in extreme wealth.

While we at the American Business History Center find all measures (“metrics”) interesting to look at, the market capitalization in itself is, in our opinion, not a very meaningful number.

For one thing, “market cap” is highly volatile.  A company that is worth a lot today may not be worth much tomorrow.  Just ask the shareholders of Sears, General Motors, or General Electric about the vagaries of the market (and of business success).

Stocks can go up or down twenty percent in a day, when in fact the real, underlying value of the enterprise rarely changes that much, that fast.  Investors are subject to fads, fancies, and fashions, which come and go.  Bubbles bubble, bubbles burst.  Old, sleepy companies sometimes come alive with new energy under new management.

A company can even drop far down the list of biggest market capitalizations at the same time that it is prospering, such as when a company breaks up into smaller pieces.  We have seen this with the old AT&T and, more recently, DowDuPont and United Technologies.

According to financial theory (and, we believe, reality), the market value of a company’s stock is the “net present value of future earnings.”  That is, it is the guess of the marketplace, determined by stock buyers and sellers, of how much money the company will make in the future.  The “net present value” part means that these profits must be “discounted back” to their present value: a dollar ten years from now is not worth as much as a dollar today, due to inflation.

Yet, in any case, these valuations are only guesses about future profits.  Such guesses are wrong as often as they are right.  Look into WeWork, or the bubble in marijuana stocks in recent years.

Today Tesla is valued at five times the combined market capitalizations of General Motors and Ford combined, though it is a tiny company by comparison.  Amazon is less than half the size of Walmart, as measured by the traditional measure of revenues, yet is valued by the market at over four times as much.

Such high-flying market values represent future expectations, which may or may not come true.  They might even be exceeded.  But the reality is that, as of today, based on facts rather than expectations, the older companies produce more products, employee more people, and often generate higher profit dollars.  Only time will tell if the valuations now placed on Tesla and Amazon are justified.

The enthusiasm with wealth and market capitalizations is widespread, especially among the young and inexperienced.  When the American Business History Center recently posted data online and on our website about the largest companies, we received responses like this one on reddit.com: “Value is the only rational measure of size anybody should care about.  Number of humans running around wearing T-shirts with your logo on it and raw revenue matters little.”

We at the American Business History Center will continue to study every “metric” we can find.  Market and popular obsessions will come and go, but there will always be lessons to be learned from studying the past.

We hope you enjoy, and learn something from, this chart which shows the rise and fall of companies, based on the stock market’s expectations about those companies.  In ten years, it will be interesting to check back and see which of these companies ultimately vindicated their present valuations.