Not So American Anymore: Book Publishing (Part One of Two) 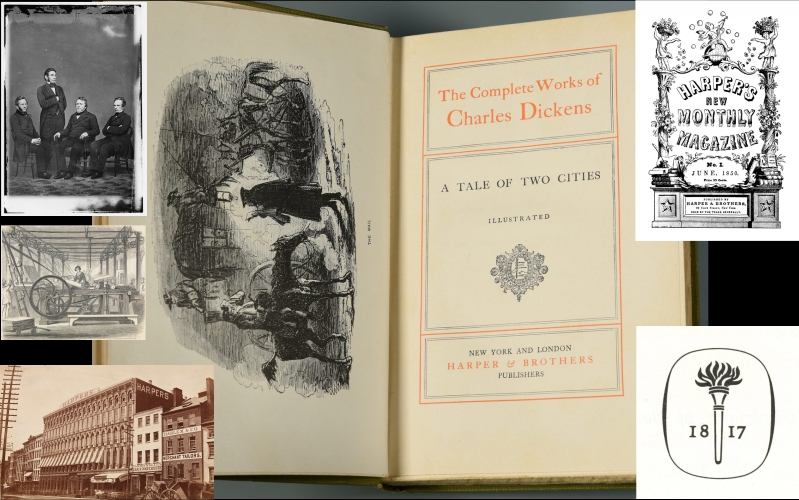 Read the second part of this two-part story here.

The history of book publishing in America goes back to the earliest days of the country.  Thousands of book publishing companies have existed, mostly small but with an outsized impact on education, culture, and society.  Today, with the explosion of self-publishing fueled by “Print on Demand’ (POD) technology, the number of organizations and individuals publishing books has grown to the hundreds of thousands.  Amazon now has about fifty million different titles for sale.

Here is the story of three of the greatest names in American book publishing, one of which is now owned by a giant German privately-owned media company, Bertelsmann.  Another (Simon & Schuster) may follow soon into the same German media empire, as recently announced.  Only one, HarperCollins (formerly Harper Brothers), would remain under American ownership.  Perhaps the Germans value English language books more than Americans and the British do!

Americans valued education even before the mid-nineteenth century rise of taxpayer-supported public schools.  Key to that education were the printing and publishing industries.  Newspapers, magazines, and books have been produced since the earliest colonial days.  Often the publishers were also printers, like Ben Franklin.  Boston, Philadelphia, and especially New York City became centers of the industry.  While small in dollars compared to the railroads and later industrial enterprises, our publishers have been critical in shaping American ideas, debates, and culture.

Like most industries, book publishing has its own jargon.  A publishing firm is a “house,” their different brands are called “imprints,” and their logo is a “colophon,” a tradition dating from ancient printers’ marks.  The book publishing industry consists of several major segments, including religious publishing (Bible have always sold well), children’s books, textbooks (divided into “el-hi” and college), encyclopedias, and “technical” books for scientists and professionals such as lawyers and engineers.  Here our focus is on “trade books,” which means books intended for a general audience and sold in bookstores.

The United States has seen many great names in trade book publishing, including Doubleday, Harcourt, Holt, Houghton Mifflin, Lippincott, Little Brown, Macmillan, Norton, Wiley, and many others.  Paperback brands led by Pocket Books and Bantam rose to prominence in the twentieth century.  In this and next week’s newsletter, we focus on three of the most important and best known, HarperCollins, Random House, and Simon & Schuster.  This week, we start with the Harper story, which begins almost one hundred years before those other two firms arose from nothingness.

In 1817, there were thirty-three bookstores in New York City.  Long Island farmer and storekeeper Joseph Harper loaned his two sons a few hundred dollars to start their Manhattan printing and publishing business.  James was twenty-one years old and his brother John was two years younger.  Soon enough they were joined by their younger siblings, Wesley and Fletcher.  These four men and their sons ruled over the company until the end of the nineteenth century.  Throughout the century, the U.S. witnessed many recessions and depressions, and with them, the book industry had boom times and bust times.  But the Harpers persisted through it all.

By 1830, the J. & J. Harper firm was producing a book a week.  Three years later, they installed their first steam-operated printing press and renamed the company Harper & Brothers.  Their titles, often reprints of British books and authors, were sold through catalogs and by traveling agents.  Customers could buy sets of books sold on subscription.  The rise of the railroads in the 1840s and 1850s enabled the company’s books to reach the edges of the growing nation.

Harpers expanded into multiple buildings in lower Manhattan, including blocks of warehouses full of books, some of which sold very slowly while others were bestsellers.  Their first dictionary alone sold 250,000 copies, before the rise of the G. & C. Merriam Company to dictionary dominance with the Webster’s name.  By 1850, the Harpers had seven five-story buildings, nineteen printing presses, and 350 employees, one of the most impressive businesses in New York City.  Printing two million books and pamphlets per year, Harpers had become the biggest publishing house in the world.

Also in 1850, the Harpers decided to launch a magazine, Harper’s Monthly.  Originally intended to promote the firm’s authors and their books, the magazine contained excerpts of their novels as well as advertising for other publishers.  By the end of that first year, the public was buying 50,000 copies of the magazine each month, then soon doubled to 100,000, huge numbers in a nation of just 23 million people (one-fourteenth of our population today).

The four brothers, known for the quality of their typography and printing, became close friends with these authors.  The brothers Harper developed a reputation as being among the most honest, fair, and decent businesspeople in the country.  They were always ready to give raises and help their workers, as well as being generous with their authors.  Key editors turned down lucrative job offers at other publishers in order to stay with the brothers.  The Harpers also encouraged a collegial atmosphere with their competitors, the other book publishers, a tradition that continued through the twentieth century.  They would not “steal” authors from their competitors and were leaders in creating industry trade associations.

In 1844, company leader James Harper was elected Mayor of New York City.  He cleaned up the police department and started work on city sanitation, but only lasted a year until the traditional machine politicians regained control.  He later turned down the chance to run for Governor of New York.

In December of 1853, their massive complex burned to the ground, a million-dollar loss but only 20% insured.  Nevertheless, the brothers kept on.  Within eighteen months, the firm had opened a massive new facility on Franklin Square in Manhattan.  (Franklin Square was at Pearl and Dover streets, and in 1877 was hidden under the New York elevated railway system.)

The brothers and their sons continued to innovate and lead the American publishing industry.  They added a weekly Harper’s magazine in 1857, and a fashion magazine, Harper’s Bazar, in 1867.  By 1880, a half million women read each issue of the Bazar, which espoused progressive ideas about the role of women in society.  (When William Rainey Harper, no relation, led the creation of a new University of Chicago in the 1890s by hiring top teachers, a wit referred to the new institution as “Harper’s Bazar.”)  In 1913, with the rise of competing magazines for women, Harpers sold the Bazar to William Randolph Hearst, who renamed it Harper’s Bazaar with three A’s.  (The Hearst family still owns the magazine today.)

The monthly and weekly magazines were filled with news, fiction, and information about books, shaping the attitudes of the nation.  Both the company’s books and magazines began to be filled with illustrations.  Harpers led the way in design, hiring top artists like Thomas Nast, famous for drawing Uncle Sam and the image of Santa Claus still familiar today.

By the time James Harper died in 1869, the next generation of the family was already active in the business, which the family continued to own.  At his funeral, Harper’s employees recognized “Mr. Harper’s generous character, his forbearing and kindly nature, his genial presence, and the kindly sympathy and encouragement with which he always lightened our labors.”  The pallbearers included New York’s wealthiest merchant Alexander Stewart and leading industrialist Peter Cooper.

Harper & Brothers focused on fiction and non-fiction trade books but continued to expand into more publishing fields: textbooks, religious books, children’s books, and many others.  They always kept their book prices as low as possible, desiring to educate and entertain the American public.  The house’s biggest success of the nineteenth century was the 1880 novel Ben-Hur, by Lew Wallace.  Despite an initial print run of 2,500 copies, it eventually sold over 2.5 million copies, including hundreds of thousands sold through Sears, Roebuck.

Despite the resilience of the founding brothers and their offspring, the deep recession of 1893 led to financial troubles the company could not overcome.  Deeply in debt, in 1896 the company changed from a family partnership to a stock company.  Financier J. P. Morgan came to the rescue with loans and purchases of stock exceeding two million dollars.  Authors and readers, including Morgan, were aghast at the idea that Harpers might fail.  Morgan put new managers in charge, but they struggled to turn the company around.  The company reduced expenses, at some loss of prestige and quality.  Magazine wunderkind S. S. McClure tried his hand at saving the company, to no avail.  In December of 1899, the company fell into receivership, meaning insolvency and bankruptcy.  When best-selling author William Dean Howells read the news, he said, “It was if I had read that the government of the United States had failed.”

At this time, with the support of the Harper family and J. P. Morgan, thirty-six-year-old Colonel George Harvey came into the picture.  Harvey had already made a name for himself as a top editor at Joseph Pulitzer’s highly successful newspaper, the New York World.  In the challenging situation at Harpers, Harvey figured out how to beat the odds and carry on the business.  He sold the college textbook operations to a newly formed “textbook trust,” the American Book Company, for $125,000.  Harvey gradually sold more stock and bonds.  Each buyer of one bond issue also received subscriptions to the magazines plus twenty-four books a year for twenty-five years.

Nevertheless, it took until 1922 for Harvey and his successors to fully right the Harpers ship.  At that time, they paid off all debts to Morgan by giving him the movie rights to Ben-Hur, worth $200,000, and selling off their printing presses (today almost no publishers print their books).

From this “restart,” Harper Brothers, as the company was commonly known, rose to new and unprecedented heights, publishing books of all types.  In 1962, Harper Brothers merged with Row, Peterson, a major textbook publisher based in Evanston, Illinois.  The company was then renamed Harper & Row.

But before looking at the more “recent” history of Harpers, next week we will turn to the shorter but equally interesting history of two houses that arose in the 1920s, Simon & Schuster and Random House.  Please stay tuned for the continuation of this story in next week’s newsletter!

Read the second part of this two-part story here.