Not So American Anymore: Book Publishing (Part Two of Two) 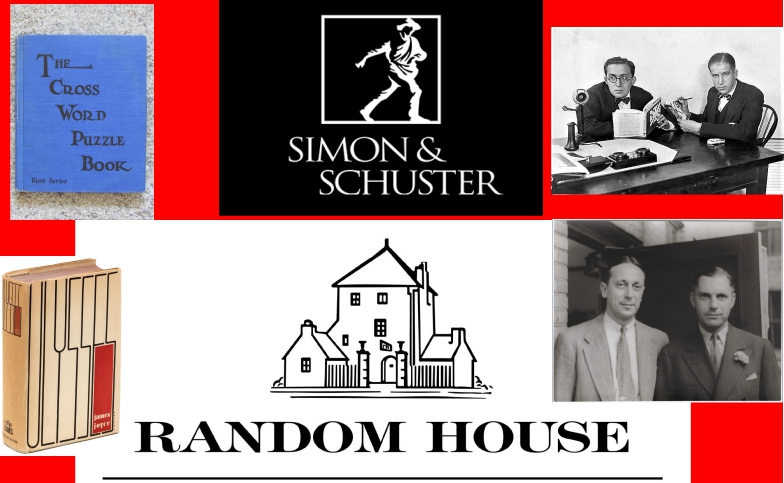 Read the first part of this two-part story here.

In our last newsletter, we told the story of the great publishing house Harper Brothers, founded in 1817.  In this issue, we continue our story with the tale of two powerhouse book publishers that arose over 100 years later, in the 1920s: Simon & Schuster and Random House.  Those stories both start with the older publishing firm of Boni & Liveright.

Publisher Horace Liveright was known to attract smart men and beautiful women.  Egotistical, insecure, and self-centered, Liveright was still able to attract some of the top authors of the times, including Theodore Dreiser, Eugene O’Neill, Sherwood Anderson, and Sigmund Freud.  But Liveright was reckless with money, not a good businessman.  His bookkeeper always gave Liveright financial statements showing losses, because if they showed money in the bank, Horace Liveright would spend it immediately.  Always short on cash, sometimes he would “sell” a Vice-Presidency at his company, Boni & Liveright, for $25,000 or more.

While Horace focused on finding new authors (and producing Broadway plays), his “cash cow” was the Modern Library series of books, which sold over 200,000 copies a year and brought in a million dollars in annual revenue.  Among the bright people he attracted to the firm were two young book lovers, Richard Simon and Bennett Cerf.  Like many others who worked for Horace Liveright, these men tired of the firm’s uncertainties and thought about starting their own publishing houses.

Richard L. Simon was born in Manhattan in 1899 to a wealthy “feather and silk” manufacturer.  He and his four siblings lived in a home immersed in music.  Jazz and classical music lovers were plentiful.  His brother drummed with the Glenn Miller Band and Richard was an accomplished pianist.  He was tall, gregarious, ambitious, and self-centered.  Above all else, “Dick” Simon had boundless energy; his many friends called him a “human dynamo.”  (Simon’s daughter Carly also picked up the music bug.)

Simon made many lifelong friends when a student at Columbia University, from which he graduated in 1920.  One of his early jobs was as a salesman for the Aeolian company, one of the nation’s largest piano makers.  Max Lincoln Schuster was the editor of an automotive trade magazine located in the Aeolian building in Manhattan.  Simon visited Schuster’s office to (unsuccessfully) sell him a piano.  Simon and Schuster became friends and began talking about starting a business together.

Schuster was born in 1897 in Austria but arrived in America when he was seven weeks old.  Quieter and shorter than Simon, many regarded Max Schuster as a genius.  In high school, he became enamored with Abraham Lincoln, and chose Lincoln as his middle name.  At sixteen he entered Columbia University, where he graduated from the renowned school of journalism.

After selling pianos, Dick Simon joined Boni & Liveright as a book salesman.  While he loved the book business, Horace Liveright’s precarious financial situation drove him off, as it did other bright men.  In January of 1924, twenty-four-year-old Simon & twenty-six-year-old Schuster started their new book publishing firm with $4,000 in pooled capital.  They rented a one-room office on West 57th Street in New York City and hung out their shingle.

Simon and Schuster were remarkable for their curiosity and variety of interests.  In addition to being a fine pianist, Dick Simon was a top bridge player and photographer; Schuster a violinist and book collector.  Their personalities were opposites, but they made a great team.  They reportedly never had a serious argument in the almost-forty-years they worked together.

But “S&S” had no books, no authors.  With their breadth of interests and fertile imaginations, perhaps they could come up with new ideas for books and hire someone to write them.  While the idea of publisher-created book ideas was not new, S&S was the first firm to start out creating their own books as the foundation of the publishing firm.

Simon was having dinner with an aunt when she talked about the new fad, crossword puzzles, promoted in the New York World newspaper.  The aunt’s daughter (or niece, depending on the source) was addicted to the puzzles.  The aunt went to bookstores looking for a crossword puzzle book to give to her daughter, but none were to be found.  After discussing the idea with Max Schuster, he and Simon decided to publish books of puzzles.

When the two talked to others in the publishing industry, they were told to keep the name Simon & Schuster off the frivolous books if their firm were ever to be taken seriously.  Under the imprint (brand) “Plaza Publishing,” their first crossword puzzle book premiered in April 1924.  They printed 3,500 copies but only sold 1,800 – at first.  Within three months, 40,000 had been sold and the company started publishing more puzzle books.  By the end of the year, the embryonic firm had sold 375,000 copies.

After that, Simon & Schuster, the men and the company, never looked back.  With Simon’s innate salesmanship and Schuster’s fine copywriting, the firm became famous for its sales and advertising methods, standing out from the conservative book publishing industry.  They also continued to develop their own book ideas.  Discovering pamphlets about philosophy written by an obscure Columbia professor named Will Durant, they convinced Durant to write The Story of Philosophy, which became a bestseller.  By the late 1920s, Simon & Schuster was the talk of the industry.

In 1939, S&S backed Robert de Graff in his new venture, Pocket Books, created to sell best sellers in cheap paperback form for 25 cents each.  The idea was an instant hit, broadening book distribution from only bookstores and department stores to include railway terminals, newsstands, and cigar, drug, and grocery stores.  The nation was soon covered with metal “spinner” racks full of the cheap “mass market” paperbacks.  Others like Bantam Books and Ballantine Books followed in the wake of Pocket Books, which was owned roughly equally by de Graff and S&S.

With their own book ideas and aggressive marketing, Simon and Schuster published all sorts of books.  Best sellers included the JK Lasser tax guides and Dale Carnegie’s How to Win Friends and Influence People.

Bennett Cerf was born in 1898 to Jewish parents in Manhattan.  His maternal grandfather was a wealthy tobacco distributor.  In 1920, Cerf graduated from the Columbia school of journalism; where he met his lifelong friend Dick Simon.  After a stint on Wall Street, which bored him, Cerf paid Horace Liveright $25,000 to join Boni & Liveright as a vice president.  But, like Simon, this experience gave him the urge to start his own firm.

Cerf, even more outgoing than Dick Simon, was a man of extremely diverse interests and a friend to everyone he met.  Quieter and more conservative was his close friend Donald Klopfer.  Like Simon and Schuster, Cerf and Klopfer were a great team, coupling the flamboyant Cerf with the businesslike Klopfer.

Seeing that Horace Liveright was not paying attention to his profitable Modern Library series of 112 titles, Cerf and Klopfer bought that business from the cash-starved Liveright for $200,000, each partner owning half.  Bennett Cerf was twenty-seven-years old; Donald Klopfer was twenty-three.  In August 1925, they hung out the shingle of their new publishing company, Modern Library, Inc.  They expanded that series of quality, affordable classics to hundreds of titles and were soon profitable.

In the booming 1920s, rich people bought fine special edition books, often handcrafted, and this became another focus of the company.  Cerf and Klopfer produced special editions of Voltaire’s Candide, Melville’s Moby Dick, and Whitman’s Leaves of Grass.  But the market crash and subsequent Great Depression put an end to that high-end business, and Cerf and Klopfer had to seek other publishing opportunities.  They decided to publish books “at random,” and renamed the company Random House.

In 1934, Random House took the bold move to publish the controversial James Joyce novel Ulysses.  Securing the American rights, they brought a copy into the U.S., which was promptly seized by customs.  They could not afford an attorney for the court fight, so offered their lawyer a percentage of the royalties on the book for life.  Cerf and Klopfer won the court battle, the book became a best seller, and the lawyer got rich.  More importantly, Random House earned the respect of the old, established publishing industry and gradually became a major force.  Authors began to approach Random House to publish their books.

In the meanwhile, the Modern Library continued to sell well, with over 300 titles by 1939.

Bennett Cerf, while continuing to run the growing business alongside Klopfer, also became a television personality, appearing on the game show “What’s My Line?” from 1951 until 1967.  He also wrote or compiled numerous joke books.  Cerf appeared to know “everyone,” in both New York and Hollywood.  His outgoing, friendly style drew people to him – and to Random House.

These four men, Simon, Schuster, Cerf, and Klopfer, all remained friendly competitors for decades.  They socialized together and played practical jokes on each other.  They also hired the best book editors, who in turn attracted top authors to the two young upstart companies.

By the 1950s, the two firms were among the largest American book publishers, standing alongside such older firms as Harpers and John Wiley.  Both companies became publicly owned, listed companies, by the late 1950s.  In 1960, Random House bought the prestigious Alfred Knopf publishing firm.

Many non-book companies became interested in the publishing business in the 1960s.  The baby boom was going through school, then on to college in unprecedented numbers.  This led to increased demand for textbooks, a highly profitable part of the industry.

At the same time, “conglomerate” became the magic word of the decade on Wall Street.  If you can run one business, you can run any business!  Diversify!  Find “synergies” (1+1=3)!

CBS, the Los Angeles Times, and many other companies bought into the book publishing industry.

The conglomerate idea did not work out in the long run, and soon enough these two publishing companies had new owners.

Throughout this era, consolidation continued in the book publishing business, with almost all of the old houses selling out and combining.  Random House and especially Simon & Schuster acquired many other publishers.

In November 2020, ViacomCBS agreed to sell Simon & Schuster to Bertelsmann’s Penguin Random House for $2.175 billion.  At of this writing, the proposed deal is under review by American antitrust regulators, who oppose it.

Even if this transaction does not proceed, the German Bertelsmann company is already the largest book publisher in the world, including of English language books.  (Bertelsmann formerly owned the old RCA Records, one of the two giants of the industry in the 20th century.  They ended up selling that business to Sony, which had acquired the other old giant, Columbia Records.  Thus both of those great music names ended up under non-U.S. owners.)

And thus, with Dick Simon, Max Schuster, Bennett Cerf, and Donald Klopfer long dead, both their companies may well end up in German hands.

Of the three companies we have covered in this two-part story, only HarperCollins will continue to be American-owned, by Murdoch’s News Corp, which also owns the Wall Street Journal, the Times of London, the New York Post, and realtor.com.

Read the first part of this two-part story here.