Our Great Department Stores 40 Years Ago 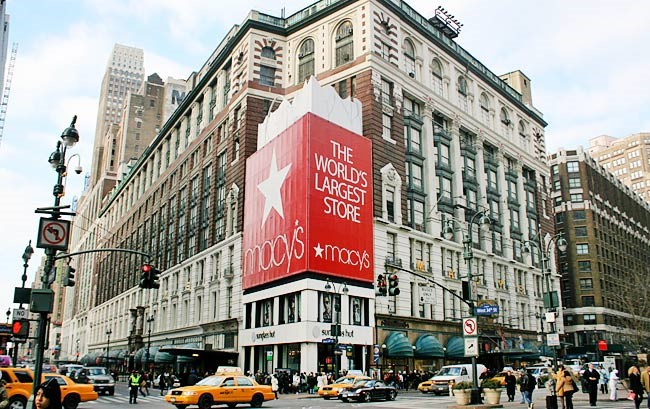 Here is the article closest to my heart, which I had never intended to publish this soon, but once I got rolling on it, I could not stop.

The reasons for their decline are manifold, including:

But from the late nineteenth century through the 1960s and beyond, each city had big stores which dominated general merchandise (excluding food) retailing in the cities and suburbs in which they operated.

Each store, in each city, had its own personality.  Some had great toy or book departments, some were known for high fashion, and most had a unique tearoom or other eatery.  From about 1890 through the 1930s, these stores were the places where people learned about new ideas, alongside World’s Fairs and museums.  Streetcar lines, buses, and subways stopped near their doors.  They employed hundreds of thousands of people and were a key part of daily American urban life.

When a giant store like Macy’s Herald Square in New York opened in 1902 (“the world’s largest store,” ultimately 50 acres), tens of thousands came to see yet another wonder of the world.

Marshall Field’s in Chicago had (and has) the biggest Tiffany stained glass mosaic ceiling in the world.  JL Hudson in Detroit built the world’s tallest store (now demolished) and had the biggest American flag in existence.  John Wanamaker’s in Philadelphia had (and has) the biggest operating pipe organ in the world.  Filene’s in Boston was known for its bargain basement.  Rich’s in Atlanta was famous for taking anything back, even items bought at competing stores at sale prices.  The stores had big auditoriums which held major events, and some sponsored major Thanksgiving Day Parades (Macy’s still does).

Over time, most of these stores were acquired by group owners, but rarely did customers realize they were owned by out-of-towners or bigger corporations.  Many of these groups were formed in the 1910s and 1920s, but continued to buy local department stores throughout the twentieth century.  The holding company groups were:

Some stores remained independent companies, either privately held like Wanamaker’s in Philadelphia and B. Altman in New York, or publicly owned, such as Alexander’s in New York, Goldblatt’s in Chicago, Woodward & Lothrop in Washington, and Carson Pirie Scott in Chicago.

A most unusual store group was (and is) the Belk organization, headquartered in Charlotte.  Beginning in 1888, Belk opened stores throughout the Southeast, in each city partnering with a local management family.  This resulted in stores with names like Belk-Lindsey, Hudson-Belk, and Belk-Leggett.  Ultimately there were 112 separate corporations operating over 300 stores, with a “non-profit” (and extremely private) central organization owned by all of those small companies.  This odd structure remained intact until the 1990s when these companies were consolidated.  In 1979, the year we study in the following tables, all the Belk stores combined did about $1.1 billion in revenue.  Because of the strange structure, no detailed sales data was available, so Belk does not appear in our tables.

Even with the formation of these large groups, until the 1980s, each retained local management, buyers, and its own personality, customized to the local market.  Today, most of them are called Macy’s after a series of mergers from the 1980s into the twenty-first century.  Many of the big downtown stores have been converted into offices, apartments, or even hotels.

Anyone who knows me knows that I love the consumer products, hotel, airline, railroad, and automobile industries.  But no industry has caught my interest for more years than department stores.  From 1973 through 1982, I was involved in the industry, first as a securities analyst in New York, then as a buyer for Federated Department Stores, and finally as a planner and analyst at the May Department Stores Company’s headquarters.  These jobs allowed me to compile a tremendous amount of data on the industry, including confidential internal data not available anywhere online or in public print, as shown in the tables and lists that follow.

If you are like me, you like to read numbers and tables, and can learn as much from studying them as from reading any block of text.  Sales and profits tell tales in themselves.

Below, you will find very comprehensive lists of the larger local department store operations back in 1979, before the big consolidations and declines took place.  Some stores are missing, but not many.  We have attempted to list all the stores that did over $40 million in annual revenue (sales) in 1979.  All dollar figures are in millions of dollars.

A few of the companies had stores across the nation, and the sales figures given are much larger than achieved in their home market alone.  Examples include Neiman-Marcus, Saks Fifth Avenue, and Lord & Taylor.  Others had expanded into new territories, including Marshall Field into Texas, Nordstrom’s into California, and the Broadway into Arizona.  A few had many stores in smaller cities, such as Pomeroy’s in Pennsylvania, Younker’s in Iowa, and Bon Marche throughout the Northwest.

(Many of the numbers are taken from actual internal financial reports of the companies; others are estimates by industry experts, mostly from Fairchild Publications, publishers of the industry trade publication Women’s Wear Daily.)

The last set of tables are lists organized alphabetically by city, so you can look up your city.

(For a more detailed history of retailing, including these stores, watch this highly visual video. To download a copy of our complete database, click here.)

We hope you find these numbers and names interesting!

Here is a great example of a table that tells a thousand stories.  Woolworth’s is long gone, Sears and Kmart are in large part gone today, and JC Penney may not be far behind.  Eight of the nine department store companies shown eventually combined to become today’s Macy’s.  The great Dayton-Hudson Company contributed its department stores to that group, but kept its Target division, and then renamed itself Target Corporation.  The ninth company, Mercantile Stores, was merged into Dillard’s.  But look at “little” Walmart, today the largest company in the world of any type, the first one to cross $500 billion in annual revenue!

As of 1979, these firms had demonstrated their durability: longevities that few companies of any type achieve.  81 of the 145 companies on our list were founded between 1870 and 1910.  These 42 were even older:

Being businesses, the greatest measure of success outside of profitability is sales, or revenues.  These numbers represent the number of satisfied transactions that took place, multiplied by the average purchase amount.  Given that prices were lower then, these figures represent immense numbers of transactions.  Every dollar shown here bought about what $3.70 will buy in 2020.  (But no cell phones or 80” televisions!)

Profits matter, too!  We do not have profitability numbers on all the companies on our list, but here are some of the most significant ones:

These giant department stores generated revenues greater than any other type of store (although some Sears stores also achieved these levels).  As of 1979, the original big downtown stores, called “flagships,” were still important to the industry (and shoppers) in terms of revenue.  Here is a list of the downtown stores which generated over $40 million in sales that year:

While those downtown stores were historically the focus of attention, these companies started building significant suburban branch stores in the 1950s, led by Hudson’s Northland store outside Detroit and Dayton’s Southdale store (at the first major enclosed mall) near Minneapolis.  The following list indicates the top branch stores in 1979.  The Burdine’s branch at Dadeland mall south of Miami would soon enough become the #1 branch store in America, doing over $100 million per year.  (All figures are in millions of dollars.)

Here, as our final list, are all the stores, organized by city, so you can look up your city or the city you grew up in.  See if you recognize any of these great old local brands.  Despite 60-100 years of solidly serving their communities, most of these names are no longer with us.  As you can see, some of these markets were highly competitive.  Cleveland and Baltimore are examples where several competitors were important.  Other markets, like Columbus and Detroit, were dominated by just one store.  The list shows total store revenues including all branches and, when available, revenue of the downtown store alone.  (All numbers are millions of dollars.)

We invite you to send us any questions or thoughts you have by responding to this email.

As always, we appreciate your time and interest. Please pass this email along to anyone you think might find it of interest. Donations to support our cause, learning from business history, are always welcome!