Recipe for Success: The Campbell’s Story 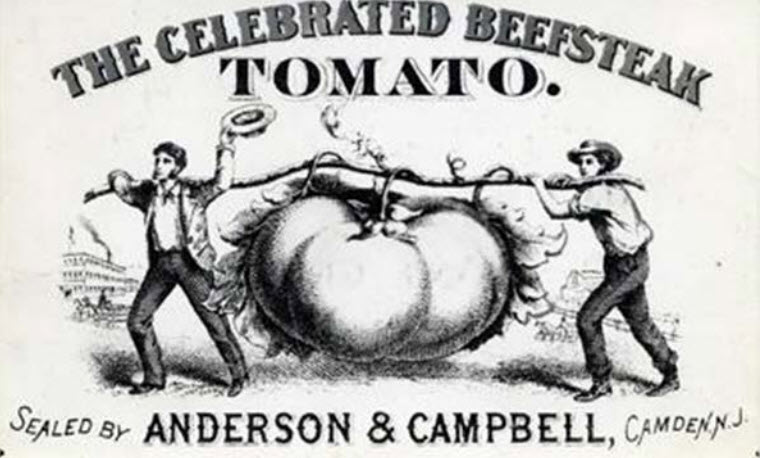 In this week’s newsletter, we publish one of the best essays from our high school essay contest, by one of our honorable mention winners.  This excellent history of the Campbell Soup Company was written by Diya Patel of Woodland Park, New Jersey.  Diya attends the Passaic County Technical Institute.  Enjoy this great story!

Recipe for Success: The Campbell’s Story

Buy-outs, near bankruptcies, rejections, and self-destructive presidents. Visionaries, medals, billion-dollar earnings, and America’s admiration. Campbell’s Soup has all these things. At first, its story could be confused for a soap (or soup) opera. But in their journey to create the first kitchen staple, Campbell’s truly rode a rollercoaster of highs and lows. This is their story.

Believe it or not, a French military general inspired the invention used to start America’s largest soup manufacturer. In the 1830s, Napoleon Bonaparte offered 12,000 francs to anyone who could find a way to preserve his army’s food. A man named Nicolas Appert rose to the occasion, and canning technology was born.

By 1860 commercial canning took off. An icebox maker named Abraham Anderson noticed the trend and hopped on the train, forming his own cannery.

Four years later, produce merchant Joseph Campbell stumbled across Anderson’s factory in Camden, New Jersey. The pair was a match made in entrepreneurial heaven. They immediately hit it off and formed Anderson & Campbell. Their company canned everything from vegetables to meats to jams to jellies: you name it, they canned it.

But while Anderson & Campbell had originally clicked, their partnership later cracked. Similar to the story of the tortoise and the hare: Campbell envisioned rapid growth while Anderson thought slow and steady growth would win their company the race. Their visions drove them apart, and Cambell bought Anderson out of the company (the first of many buy-outs in their history).

By 1896 Campbell’s had ventured into ketchup. “Beefsteak Ketchup” was an all-time hit. It would be hard to find a kitchen without it. But Arthur Dorrance’s nephew, John T. Dorrance, wasn’t satisfied with just ketchup.

His degrees from MIT and the University of Göttingen earned him a plethora of chemistry job offers. But his heart lied with his Uncle’s company. Dorrance believed Campbell’s needed a chemistry department. To him, food science was the future.

His Uncle did not share that vision. A lab was reluctantly approved, but still, John faced lots of fine print. He had to fund everything himself with just $7.50 a week. Dorrance went from respected to unacknowledged but didn’t mind as long as he could work.

John Dorrance had the perfect idea for a new product line: soup. Today, soup is comfort food, but in the 1890s, it was an exclusive delicacy. John Dorrance hoped to bring soup to the masses.

Dorrance presented his idea to his Uncle but was immediately shot down because of the project’s cost. Shipping costs vexed every 19th-century company. Bulky cans devoured warehouse space and were costly to transport. John hated to admit it, but his Uncle was right. Selling soup would cost a fortune before it would make a fortune.

Soon, a lightbulb went off in John Dorrance’s head, which would guide Campbell’s success for the next century. Dorrance could cut the bulk from bulky cans. If soup were condensed, cans would become lighter and cheaper. Later, consumers could add water themselves. Dorrance spent months developing the world’s first condensed food. American cooking was about to be transformed.

After trial and error, Dorrance had his Eureka moment. The only problem was that while he was an expert chemist, Dorrance didn’t have a culinary bone in his body. His soup formula, although chemically perfect, tasted horrible.

So Dorrance emptied his savings and headed to Paris to learn to cook. The culinary capital of the world did not treat him well. For months he did grunt work in kitchens, but by the end of his trip, he was a culinary master.
Dorrance picked up where he left off, and the result was mm, mm, good! Arthur found a new faith in his nephew. This soup would solve all their problems.

This technology would reduce shipping costs and make cooking easier. In all senses of the word, it was revolutionary. Nothing differentiated Campbell’s from any other cannery until this point, and the competition was eating them up. They lost $60,000 in a year at their worst, but this soup would be their savior.

The First Time Is Not the Charm:

Dorrance’s technology allowed Campbell’s to sell a can for 20 cents less than their competitors. There was no way consumers could resist.

But shockingly, they resisted. The launch failed. Most Americans never tried soup, so no matter how cheap it was, they didn’t want to buy it. Everything John Dorrance developed became pointless. Campbell’s was drained of funds, and the future seemed bleak.

If the company was to survive, they needed something to validate their product, and they needed it soon. Then, John Dorrance came across their last hope. In 1900, a World Fair was to be held in Paris. If Campbell’s could bring home a medal, consumers might find a newfound respect for soup. This was their last shot.

Thankfully, the convention awarded Campbell’s a Gold in the Soup Category. Back in America, already a chemist and an entrepreneur, Dorrance became a marketer. He changed the Campbell’s label to showcase the medal front and center. The soup had essentially been declared the best globally, and at just 10 cents, this truly was an irresistible product. Sales topped $100,000 in months.

The man at Campbell’s best equipped to fight Heinz was John Dorrance. In 1914 he bought all the outstanding Campbell’s stock and his Uncles shares for $3.4 million. He was now the sole owner of Campbell’s.

Dorrance did not want to be a jack of all trades: his only focus was soup. The Heinz company outdid him in all but two products. As president, Dorrance stopped production of everything but soup and pork & beans. In fact, in 1921, he renamed the company the Campbell Soup Company as an homage to their best product.

Dorrance wanted everything to stay in-house. While Heinz took loans, Campbell’s was financed only by its earnings. Dorrance never let himself be indebted to anyone not named Dorrance.

While Heinz and Campbell battled for America’s wallets, Dorrance risked it all and began one of the first mass advertisements. Streetcar ads doubled city sales.

Dorrance also knew Americans needed to see a clear use for Campbell’s soup. So in 1916, Campbell published its first cookbook, “Helps for the Hostess.” By the next decade, Campbell’s sold 500,000 cans. Later they published another cookbook called “Easy Ways to Good Meals.”

In 1931 the company used radio advertising to debut their “M’m! M’m! Good!” jingle. These campaigns made Americans think of Campbells as the go-to for soup. In 1942 sales topped $100 million. Heinz could not compete with the brand recognition Campbell’s had built.

Welcome to The Tomato State:

In 1950, Campbell’s went public on the New York Stock Exchange. Additionally, they began to focus inwards on manufacturing.

Campbell’s epitomized southern New Jersey. Almost everyone in the area worked at the plant, and passersby knew they were in Camden when they saw the factory.

As the market expanded, Camden stepped up to the plate. This mass production was unprecedented, and to help factories deliver, Dorrance used practices similar to “lean production”: the modern gold standard in manufacturing. Each plant produced 6,000 cans daily. Once more, Dorrance was ahead of his time.

Too Much, Too Fast:

In 1980, Gorden McGovern became president and took the phrase “shop til’ you drop” a little too literally. His purchase of choice was other companies. Until now, Campbell’s (following Dorrance’s practice) rarely took loans. But McGovern took loans to acquire almost 15 companies. Campbells was weighed down by gaining 334 products in 5 years and, frankly, couldn’t handle it.

By 1989 McGovern made Campbell’s profits sink by a whopping 90%. But soup sales persevered and balanced McGovern’s impact. Even in the 1990s, Campbell soups had 66% of the $2.6 billion U.S. soup market, and soup still brought them 50% of their profits. Yet again, soup was their savior.

Where Are They Now:

In 2021, Campbell’s celebrated its 152nd anniversary. They are still in Camden and have 14,500 employees. They sell a billion soup cans every year and regularly make the Fortune 500 list. In the 2020 fiscal year, they hit $8.7 billion in sales. Soups alone make up 30% of those sales.

However, soup sales overall saw a 13% decline over the last decade. Today, Americans opt for healthier foods, and Campbell’s has had a hard time … until COVID-19 disrupted everything.

Over quarantine, Campbell’s attracted 8.6 million new customers. These buyers were young, implying that Campbells reached a new generation of soup lovers. The company increased its market share, and the current CEO and President Mark Clouse is confident this trend will continue. He is helping Campbell’s fit into a more health-conscious America. Since its creation, Campbell has represented America, and as America changes, Campbell’s will change with it: the Dorrance’s (who still own stock in the company) are adamant about that.

Campbell’s reshaped food consumption in America and stapled childhoods across the nation. Campbell’s sold a product, but in the process, they fostered a culture. Their history proves that while products are important, advertising and manufacturing give a company a legacy. Campbell’s foray into mass advertising and mass production developed methods still used today.

Campbell’s stood up against Heinz and won because they built a brand. They validated the idea of consumer trust, and companies continue to aim for that. Campbell’s product is undoubtedly American, but so is their story. They epitomized entrepreneurship with visionary leaders. They dared to risk while the rest of the world told them to give up.

There is no doubt that Campbell’s current leadership will innovate just like their predecessors and reinvigorate America’s love for soup.

“Soup of The Century.” The Food That Built America, season 2, episode 8, The History Channel.