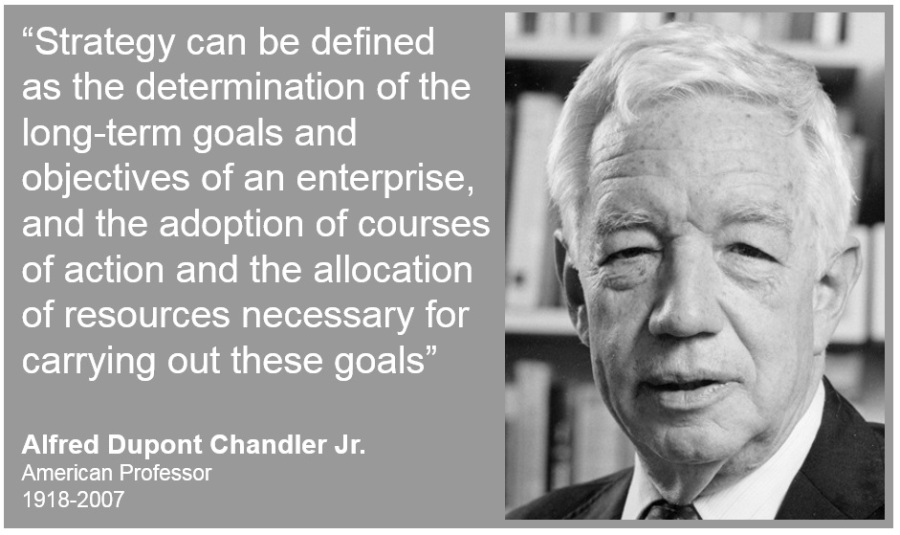 Although little-known outside academia and students of management, the late Alfred Chandler, Jr., was the greatest business historian we have yet seen.  His Pulitzer-Prize-winning 1977 book The Visible Hand: The Managerial Revolution in American Business is the single best story of how big business and large corporations came about.  While studied in many graduate business schools, many historians and businesspeople are not familiar with his work.  They should be.

As many great thinkers, from Winston Churchill to Steve Jobs, have (in essence) said, “You cannot know where you are going unless you know where you are coming from.”  Not only is understanding evolution critical to seeing the future, but we can all learn lessons and concepts from the great leaders and enterprises of the past.  No one tells us that story better than Chandler.

Unlike some business and economic scholars past and present, Chandler was never afraid to do the hard work of understanding the details.  His dissertation, later turned into a book, was the biography of Henry Varnum Poor, the founder of what became Standard & Poor’s, as in the S&P 500 Stock Index.  Chandler dug into the papers and letters of Poor to understand the man.  For other works, he read daily newspapers issue by issue, covering many years; or dove deeply into fifty-year-old financial reference books.  He looked not at just one industry, one time, or one place, but he literally looked at every industry, time, and place – and synthesized what he learned in plain language.

Alfred Chandler’s theories and “models” came not from a computer or algorithm, but from painstaking years and years of reading, thinking, comparing, and looking for patterns.

In The Visible Hand, he focuses on the evolution of American business.  At first, businesses were of modest size, owned and run by their owner and his or her family.  As America expanded westward, new markets opened up.  Railroads, the first big, professionally run business, opened these markets.  Consumer tastes were unified by a rising national press, especially magazines.  Chain stores arose, facilitating national distribution.

Manufacturers either grew with these markets or died.  But in order to grow, they had to raise capital, build new plants, and learn to use the new “technologies” of trains and magazines for logistics and marketing.

Perhaps most importantly, these enterprises were required to develop new ways of managing the enterprise.  No longer could the owner walk every production line every morning.  Trained, professional top and middle managers – new concepts – were needed.  As companies raised more capital, they “went public,” offering their stock to anyone who wanted to buy, and thus spreading ownership outside the founders, their partners, and families.

These patterns happened in different ways at different times in each industry, depending on the nature of the industry, as Chandler carefully describes.  Chapters in The Visible Hand cover everything from department stores to oil refineries, from steelmakers to meatpackers.

Chandler’s work evolved over his 88-year lifespan.  He taught at MIT, Johns Hopkins, and finally at Harvard Business School, each for many years.  His first book Strategy and Structure began his study of big business.  The Visible Hand came next and was followed by a comparison of big business in the United States, Great Britain, and Germany entitled Scale and Scope: The Dynamics of Industrial Capitalism.  Two later books covered the story of computers and consumer electronics, and the chemical and pharmaceutical industries.  Each is a masterpiece of research, comprehension, comprehensiveness, and storytelling.

In 1988, Harvard Business School published a collection of his papers and essays entitled The Essential Alfred Chandler: Essays Toward a Historical Theory of Big Business.

While anyone seriously interested in business history should read all these books, we suggest most readers start (and perhaps end) with The Visible Hand.  No other single book will teach you as much about business history.

As we read these books, some may wonder, “How is this relevant to building and running a business in the era of Amazon, Google, TikTok, Uber, and Netflix?  Railroads and chain stores are not relevant to my venture.”

The key is that, by studying these well-told stories, we begin to fully grasp how strategies, management structures, expansion plans, and capital allocation all reflect the environment we are in.  While it may have happened almost one hundred years ago, Procter & Gamble’s decision to sell directly to stores rather than going through wholesale distributors required the company to change almost everything it did.  Shipments went out in small lots instead of boxcar loads.  The company’s accountants had to deal with hundreds of new salespeople and 450,000 new customers.  Did they do this transition slowly or quickly?  (Chandler says, “overnight.”)  How do you distribute your products?  Your software?  Is the world changing in a way that you need to rethink your “business model?”

Do new technologies or new competitors make you rethink your entire approach to business?  If you are running General Motors, Toyota, or Volkswagen – or a car dealership – what are the implications of Tesla and its new methods of production and distribution?  How should you react to new regulations?  Should you maximize long-term survival or short-term profits?  The questions of today are much the same as the questions of the nineteenth and early twentieth century.  Every page of each Chandler book yields ideas, inspiration, and challenges to our ways of thinking.  We at the American Business History Center believe that every businessperson (or leader of any organization) would benefit by diving into Chandler’s books.