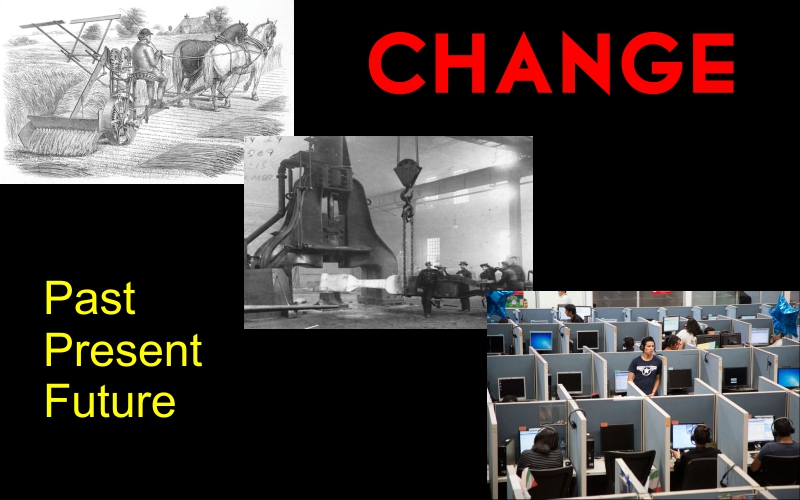 “You can’t connect the dots looking forward; you can only connect them looking backwards”

The American Business History Center wishes happy holidays to all of our readers.  As another year comes to a close, it’s a great time to think back over time, to learn from history and see what trends might point the way to our shared future.

Almost every aspect of life and business evolves, changing continually.  There are “macro” and “micro” trends in every nation, state, and city, and in every industry and line of work.  Here we touch on a few trends (and unchanging things) that we find most interesting.  Our aim is not to be comprehensive, but to provoke further rumination by all of us.

In studying these evolutions, we must be careful to avoid the common trap of thinking that our own era is somehow different, more complex, or faster-changing than previous times.  Those of your writer’s age have seen the coming of the jet age, the invention of the theme park, the rise of the computer, and the Internet “revolution” that has touched every aspect of life.  Yet consider a person who lived from 1870 to 1930, a mere sixty years.  In their lifetime, science fiction turned into reality alongside many cultural and social innovations:

Continuous technological progress has been with us for the last two centuries, since the industrial revolution.

“History may be divided into three movements: what moves rapidly, what moves slowly and what appears not to move at all.”

In order to understand change, we need to look at the types and direction of change.  We form a foundation of understanding by first thinking about those things that do not change, or perhaps, in Braudel’s words, “appear not to move at all.”

If one studies the classics of Greek and Roman thought, the scriptures of the world’s religions, and behavior over the centuries, human nature appears not to change.

Yet, even then, social mores and acceptable behaviors do evolve.  We gave up on sacrificing humans to the gods.  For centuries, slavery was part of life, accepted around the world.  No more.  The Bible implies that the poor will always be with us, yet for the first time in human history we can foresee the virtual elimination of poverty, with the UN in recent years telling us that we are ahead of their projections for poverty reduction.

Sixty years ago, large-scale gambling was only legal in one state, yet today it is almost universal.  Our attitudes (and regulations) about alcohol and drug use, abortion, prostitution, tobacco, homosexuality, and firearms have changed dramatically over the last century.  Words and activities that were verboten on television a few decades ago are now on prime time every hour.

Yet human nature itself, our innate curiosity about the world around us, our generosity to our families and communities, and our drives for survival and for perpetuation of the species, underly all human activity.

We would suggest a starter list of other aspects of life that appear not to change:

Our natural interest in current events, in the “news,” often takes our eye off the underlying, long-term changes taking place.  We read and hear of earthquakes, tsunamis, and volcanoes, but sometimes forget to study the “plate tectonics” that underly those events.

Here are some long-term trends that shape American (and often global) lives and occupations, which continue today and can be expected to continue for the foreseeable future:

Of course, technological evolution continues unabated.  Yet even the amazing recent strides in eCommerce, social media, smartphones, artificial intelligence, and cryptocurrency are in reality just more advances in the use and management of electrical impulses, a trend that began over one hundred years ago.  Bits and bytes, ons and offs inside computers have allowed books, phonograph records, pictures, and movies to be converted into digital forms, easy to make and easier to ship.

We should always remember that every technology, every innovation, has a dark side, a flaw of some sort.  People die in airplanes and automobiles, and even from electricity.  Vital medicines have side effects, sometimes fatal.  In the wrong hands, nuclear energy could mean the end of the world.  Yet each of these technologies has provided so much good for society that we have learned to live with the “downsides.”

It is also worth noting that media and entertainment follow technology closely, especially innovations in communications.  Printing presses facilitated books, newspapers, and magazines.  The telegraph allowed news and correspondence to fly around the world at unprecedented speeds.  The invention of photography led to the movies and then television.  Sellers of “adult material” were the earliest and most aggressive users of VHS tapes, DVDs, and video streaming.  And today the whole world seems to be on Facebook and Amazon, all connected.

As your writer looks back over the almost-sixty years that he has been studying the world and especially business, these changes come to mind:

At the same time, all those long-term trends, such as the transition from an industrial economy to a service economy, continue apace.

Each of these trends has implications for the future.  No one should be surprised to see more and larger companies headquartered in Latin America and Africa, following the rise of the Asian companies.  New uses of electricity, better batteries, and continuing miniaturization and thus portability can be expected.

Other aspects of human behavior seem to swing back and forth.  In their book The Lessons of History, the great historians Will and Ariel Durant wrote of the pendulum-like nature of some parts of life.  Possible examples today include:

Another phenomenon worth observing are convergences, where two previously separate things come together over time.  In fact, we believe that combining two things in new ways is the most important source of innovation, as described in this post and this video.  Examples that come to mind include:

Changes like these shift our fundamental understanding of industries and their products and services.

It is likely that every trend, every technology mentioned in the above paragraphs, brings its own challenges with it.  IF there is one thing we know about humanity, it is our ability to tackle such challenges and figure out ways to make things better, to innovate.

Some present-day challenges that strike us as especially interesting are:

As you read the preceding paragraphs, we imagine you have thought, “But what about this? What about that?  What about going into space?  Biotech?”  Those who think about history and about the future will have many more items to add to our lists.

We at the American Business History Center only hope that our work provokes more thinking on everyone’s part, more learning from the past, and hopefully ideas about how to shape the future.  That future depends above all on us, our ability to understand change, and our confidence in our abilities to effect change, envisioning a better future for all.

“The further backward you look, the further forward you can see.”

Book recommendations for seeing the future:

Abundance: The Future Is Better Than You Think, by Peter Diamandis and Steven Kotler

Enlightenment Now: The Case for Reason, Science, Humanism, and Progress, by Steven Pinker

Factfulness: Ten Reasons We’re Wrong About the World–and Why Things Are Better Than You Think, by Hans Rosling and others

Fewer, Richer, Greener: Prospects for Humanity in an Age of Abundance, by Laurence Siegel

It’s Getting Better All the Time: 100 Greatest Trends of the Last 100 years, by Stephen Moore and Julian Simon

Progress: Ten Reasons to Look Forward to the Future, by Johan Norberg

Ten Global Trends Every Smart Person Should Know: And Many Others You Will Find Interesting, by Ronald Bailey and Marian Tupy

The Human City: Urbanism for the Rest of Us, by Joel Kotkin

The Next Hundred Million: America in 2050, by Joel Kotkin

The Rational Optimist: How Prosperity Evolves, by Matt Ridley

The State of Humanity, by Julian Simon