The Biggest Companies in the World 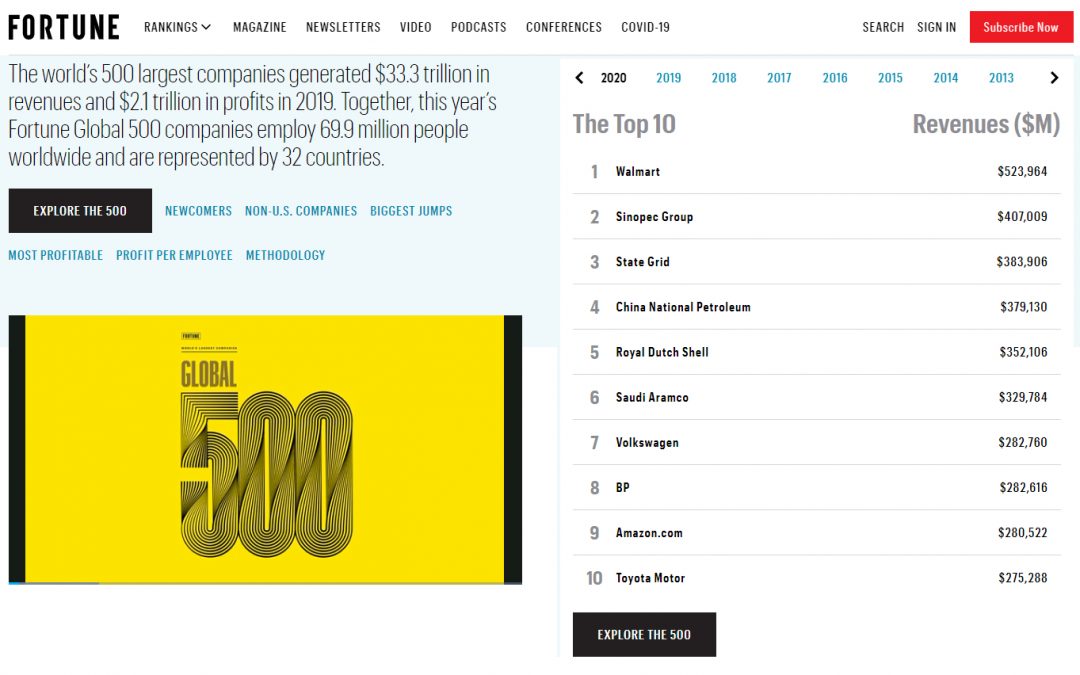 Fifty-seven years ago, meatpacking giant Swift was the 15th largest public company in the world.  Today that 15th spot is held by American health insurer UnitedHealth.  Apple sits in the 12th position formerly held by Texaco, now part of Chevron.  Amazon has taken Unilever’s #9 role.  These facts tell the story of an aging but more tech-savvy population.  Steel, beef, and chemicals have given way to shopping and health.  The world’s largest company, Walmart, is a retailer.

Yet the biggest story is the fall and rise of US companies among these global giants over those intervening fifty-seven years.

The August/September 2020 issue of Fortune magazine contains their updated annual list of the world’s largest publicly owned companies, ranked by 2019 revenues (sales).  We at the American Business History Center love these lists and believe a lot can be learned from them.  In this issue of our newsletter, we step back to data from 1962 (the first year your author started studying such lists) and 1994, by which time Fortune assembled a complete list of the world’s largest companies, covering all industries.

Over the years, some state-owned utilities and other businesses have crept into the list.  In the early years of the lists, Fortune did not compile all the world’s companies, but listed the largest “foreign industrials” as well as the largest US retailers and utilities in separate lists from the main Fortune 500, which only covered US “industrial” companies (manufacturers).  We have combined these lists, published in 1963, into the following table.  Non-US utilities (often government-owned) and non-US retailers would not be on the list, and all privately owned companies are excluded.

You will see from this table that the US dominated the world of giant corporations in 1962 (17 of the top 20 companies).  The oil business was huge.  Only 8 of the 20 largest companies are still today freestanding, independent companies that have not been bought by another company.  And even after buying two of these other top 20 companies (Gulf and Texaco), Chevron (formerly Standard Oil of California) does not even make the top 20 today (it is #36 now).  (Note that Western Electric, a wholly owned subsidiary of AT&T (#3), was also in the early Fortune lists but we have excluded them here.)

By the time we advance 32 years to 1994, we find that Japanese companies have largely taken over the top of the list.  The USA, which had 17 of the top 20 in 1962, is down to 6 of the top 20.  Japan has remarkably risen from 0 to 12 of the top 20.  Europe is down from 3 to 2.  (Most of the Japanese companies listed were trading companies, that sometimes report the total value of the transactions they enable, and sometimes just report their commissions and fees received.  The profits of such companies are far smaller relative to their revenues than in most of the industrial companies listed.)

If we fast forward to the most recently released numbers, for 2019, we see that the whole world has changed, with Japan dropping to just one company (Toyota), the USA back on top with 8 companies, but China has risen to 4 companies.  The Chinese companies include 3 of the 4 biggest, all partially owned by the Chinese government, but still smaller than Walmart, the world’s largest company.  Seven of the companies are from Asia if Saudi Arabia is included.  Europe (including the UK) is up from 2 to 5. Saudi Arabia, South Korea, and Switzerland each host 1 of these global companies.

Only Royal Dutch Shell and ExxonMobil (under three names) have been on the top 20 list at all three times.  While the oil business is struggling today, these two companies will likely continue to exist well into the future.

Technology giants are ever-shifting: GE in 1962; GE, Hitachi, and Matsushita (Panasonic) in 1994; and Apple and Samsung in 2019.  Retailing moves from the A&P and Sears to Amazon and Walmart.

But what other companies will be up there with them in another 20-30 years?  Where will Walmart, Amazon, Apple, CVS, and Warren Buffett’s Berkshire Hathaway be?  Will Asian companies continue to take over more and more of the list?  When will we see companies from the Southern Hemisphere and from India?  How will the mix of industries change?  Will Amazon be the first company to reach a trillion dollars in annual revenues?  To be continued…