The Business History of Woodstock 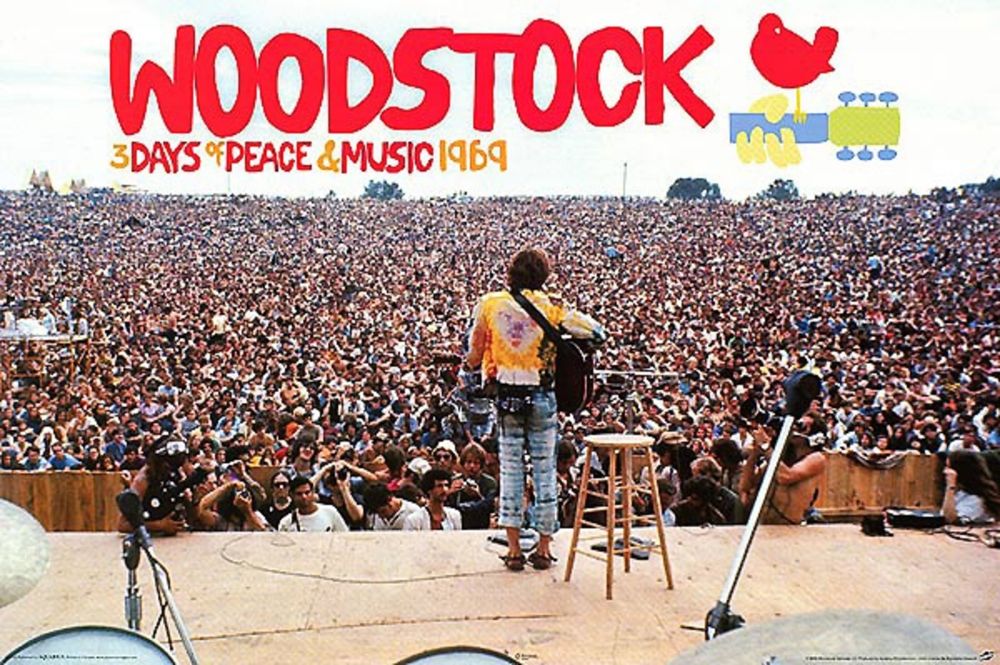 Too often, when we see great entertainment or a great event, we forget that someone had to dream it up, organize it, and finance it.  Fifty years ago this month, from August 15 through 18, 1969, the most famous music festival of all time took place in Bethel, New York.  “Woodstock – an Aquarian Exposition: 3 Days of Peace and Music” drew more than 400,000 people to hear music ranging from Joan Baez to Jimi Hendrix, from the Who to Sly and the Family Stone.  Blockbuster records and an Oscar-winning documentary film followed, as well as a library full of books and stories about the festival.  Despite all the hoopla, few know the business story behind Woodstock.

Step back to the 1930s, when Alexander Block of the Block Drug Company introduced Polident, a denture cleaning product.  His daughter married a man named Roberts, and in 1945 they had a son, John Roberts.  By 1966, when John turned twenty-one, his grandfather and mother had died, and he inherited about $250,000 from the family denture fortune.  However, he could only spend the interest on this money (which he did), not receiving the principal until he was older – one-third when he turned twenty-five, one-third at thirty, and one-third at thirty-five.  Freshly graduated from the University of Pennsylvania, John Roberts did not know what he wanted to do in life, but he had money – the equivalent of $2 million today.

John Roberts soon hooked up with Joel Rosenman, a recent graduate of the Yale Law School and the brother of one of John’s friends at Penn.  Like John, Joel was also seeking his life’s path.  Both men thought the entertainment industry would be interesting.  By the spring of 1967, John and Joel, twenty-two and twenty-five years old, were rooming together in New York City.  They decided to create a television series.  The idea was about rich kids (like themselves) looking for investment opportunities.  Each episode would tell the story of a business adventure – or misadventure.  The problem was that they did not have enough business ideas to create the episodes.  So, on March 22, 1967, they put a tiny ad in the New York Times that read:

John and Joel received over five thousand replies to the little ad.  They proceeded to meet with dozens of people with crazy schemes.  They also built a recording studio in New York called Media Sound.

In this process, their lawyer called and suggested they meet with Michael Lang and Artie Kornfeld.  The lawyer warned the businesslike John and Joel not to be put off by the appearance of Michael and Artie.  John and Joel did not know what to think when the heavily-fringed Michael Lang and the equally spacey Artie Kornfeld showed up at their apartment-office.  Twenty-three-year-old Lang had owned a headshop in Miami and promoted concerts.  He was well-connected in the music industry.  Twenty-five-year-old Artie Kornfeld had already written and produced dozens of hit records, most recently for a band called the Cowsills, and was the youngest vice president at Capitol Records.

Michael and Artie wanted to build a recording studio in the Catskill Mountains north of New York City, near the homes of several prominent musicians including Bob Dylan.  Busy with their own studio in New York, John and Joel were not interested in doing that.  But along the way, they asked Michael and Artie how they were going to launch and publicize the rural studio.  The answer was that they planned to have a big music festival with all the local musicians, drawing attention to the relatively remote location.

From these conversations evolved the idea of a giant music festival in the Catskills.  But there was one problem.  Not only did John and Joel not have “unlimited capital,” but John was not old enough to access his inheritance yet.  After being turned down by banker after banker, John found one who was willing to loan John up to $800,000, using his future inheritance as collateral.

Thus was born a business, Woodstock Ventures, with the four men as partners, and the festival in Bethel, near Woodstock.

There is no need to recount here the story of the festival and the great music performed there, as that history is readily available in many books and on the Internet.  (The best way to grasp Woodstock is to watch the movie, one of the greatest documentaries of all time.)  Suffice it to say that it was a huge success.  But not without problems: traffic jams, heavy rain, farmers’ fields overrun by hippies, and multiple lawsuits brought by local property owners.

The Woodstock festival sold $1,800,000 worth of tickets.  But expenses including $250,000 for the musicians totaled $2,800,000.  There was plenty of cleanup to be done and about eighty lawsuits to be settled.  The four partners knew that the long-term rights to the recordings and film would be valuable, but they were essentially broke.  Their immediate problems scared them (and scared their banker even more).

About the same time, Warner Brothers, which had secured the recording and movie rights, paid Woodstock Ventures $1,000,000.  $600,000 went to clean up the grounds, pay attorneys, and settle lawsuits.  When all the dust settled, the net loss was $100,000.  Gradually, royalties on records and the movie came in, and John and Joel had broken even on their investment by the late 1980s.

Despite their differences, John, Joel, and Michael reunited to put together Woodstock ’94.  Michael also produced Woodstock ’99.

John Roberts died at the age of fifty-six in 2001.  His estate still collects royalties.  Joel, Michael, and Artie each went on to illustrious careers.  All four men wrote books about their Woodstock experience.  Artie Kornfeld has done over 5,000 radio interviews.

In 2001, British pharmaceutical giant GlaxoSmithKline spent $1.2 billion to purchase the Block Drug Company, by then including Nytol sleep aids, Tegrin medicated shampoo, Super Poli-Grip, and many other over-the-counter products.

Without Polident, we might never have heard of Woodstock, New York.

Sources: Woodstock: The Oral History, by Joel Makower (1989) and Young Men with Unlimited Capital: the inside story of the legendary Woodstock festival told by the two who paid for it, by John Roberts, Joel Rosenman, and Robert Pilpel (1974).  There are many other excellent books on Woodstock, with several published for the 40th and 50th anniversaries in 2009 and 2019.