The Drugstore Shelf and the Stewardship of Brands 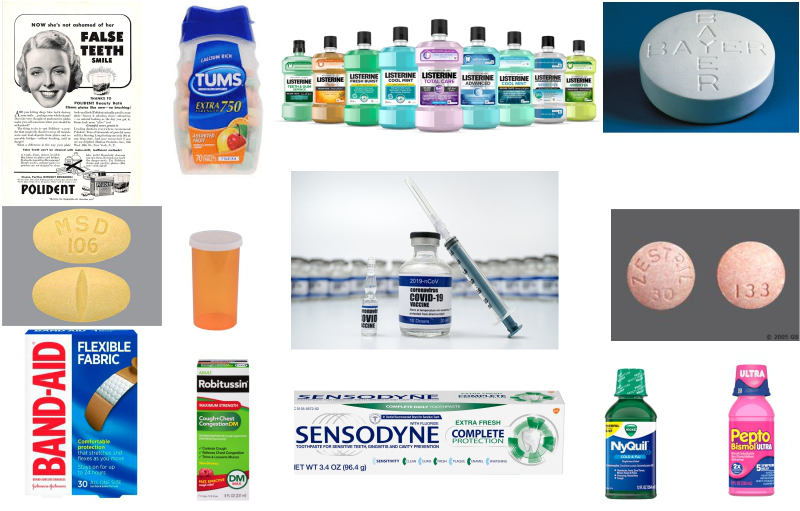 “Big pharma” and “biotech” are in the news these days.  Politicians attack the industry and the price of drugs.  At the same time, Pfizer, Johnson & Johnson, and others hurry along to develop a COVID vaccine.  These companies have been among the world’s most inventive, saving millions of lives with their products.  Due to their complex methods and long product names, pharmaceutical companies are difficult for those of us outside the industry to explore and explain.  In equally complex high-tech industries like aerospace and electronics, we can at least show product pictures.  In pharma, even pictures are of little help:

In the future, we hope to dive into the long history of the great prescription drug-makers.  At the end of this article, we’ve added two appendices:

But today, we focus on another side of the pill business: consumer healthcare, also called Over-The-Counter (OTC) drugs.  These are the thousands of pills and liquids we can buy without a prescription, that everyday make our lives better, from aspirin to Pepto-Bismol.

OTC is a $35 billion business (data from the Consumer Healthcare Products Association):

These OTC products have a longer and deeper history of consumer branding than do prescription drugs, which only started advertising in recent decades.  Perhaps we can learn something about branding and brand management from these remedies.

Brands are a funny thing.  The great ones have a life of their own.  Tide and Coca-Cola seem to grow stronger with age.  Brands are born and brands die.  Where are Ipana and Pepsodent toothpastes today?  How about Pontiac and Oldsmobile, once leaders in their industry?  Even “industrial products,” like Douglas airliners and Mack trucks, rise and fall.  Others including Boeing and Deere persist.

Companies give birth to and kill off brands for many reasons.  Often, companies buy and sell brands as if they were a stock in an investment portfolio, nothing more than a piece of paper.  The reasons companies keep or don’t keep brands include:

(We would love to compile the brand turnover – how often a company buys and sells brands – of each company.  Our research indicates that few if any people are looking at that metric.)

But are brands – and their consumers – well-served by having four different parent companies in twenty years, perhaps with ten different CEOs, each with a “new vision?”  We think that’s unlikely, except when a good old brand falls into the hands of someone who loves it and builds upon its past strengths.

Managing a brand, particularly mature ones like those discussed below, is an art form.  The managers of the best brands deeply understand their customers and how they perceive the brand, what it stands for.  (Here is a great story about the former CEO of Procter & Gamble, the company that pioneered brand management.)

The best brand managers use imagination to envision the brand’s future.  They take risks and try new things.  They see opportunities where others do not.  They combine the strengths that come from years of consumer familiarity with product and packaging improvements and “brand expansion.”  (Look at M&M candies the next time you are in a store to witness brand expansion.)  These managers believe in their brands so strongly that they will even stick with them through hard times.

Consumer Healthcare in the Historical Context of Big Pharma

If we go back to the 1960s, we find several big American companies that focused on OTC products.  American Home Products, Bristol-Myers, Warner-Lambert, and Sterling Drug were all large companies for the time.  Each made some prescription drugs, but far more of their sales came from OTC products, including Anacin, Bufferin, Listerine, and Bayer aspirin, respectively.

All four companies more than doubled in size in the 1960s and most tripled their profits or better.  Most of them never had a down year in profits during that era.  They all had substantial international revenues.  And all four were good stocks to own and were widely held by investors of the time (though not the skyrocket stocks of the era like Xerox and SS Kresge, with its new Kmart stores).

Over the ensuing fifty years, these four companies decided to focus on prescription drugs.  Prescription drugs carried higher profit margins.  While sometimes as risky as drilling for oil (most new drug ideas never make it through the testing and approval process), the payoff on “blockbuster” drugs can be huge.

(It is worth noting that, with the rise of genetic and other technologies, these big prescription drug companies have made many acquisitions.  They have often depended on those acquisitions for innovation rather than on their own research and development labs, as they did in the 20th century.  See appendix 2 on the history of Pfizer.)

As these companies shifted from OTC to prescription drugs, they perhaps missed the balancing attributes of mass-marketed consumer products:

These OTC products require brand managers who see themselves as stewards of the brand.

In the table below, we list nineteen brands that existed in 1966, that still exist today, but have seen multiple owners.  Some of these items were shuffled from parent company to parent company.

Note that British GSK (GlaxoSmithKline) has majority control of their big OTC joint venture with prescription giant Pfizer, which they intend to spin out as a separate company.  Then the GSK and Pfizer brands will be united in the new company, presently called GSK Consumer Healthcare.  Based on current revenues, this new company will vie with Johnson and Johnson to have the biggest global OTC business, with annual revenues of about $13 billion.  The German Bayer company and Cincinnati’s Procter & Gamble (P&G) are among the largest OTC medicine companies after those two.

It is fascinating that, while American Home Products, Bristol-Myers, Warner-Lambert, and Sterling Drug all moved out of OTC, some of their key competitors – GSK, Bayer, and Johnson and Johnson – did not.  They acquired more OTC brands and invested in them, seeing something the others did not see.

The great P&G actually entered the business (they even dabbled in prescription drugs but realized their skills and distribution system were not a good fit).  Their brands like Pepto-Bismol and NyQuil have been well-tended, growing and gaining shelf space in drugstores since P&G bought them.

Johnson & Johnson (J&J) in particular has never wavered from their belief in OTC.  Their product Tylenol long led the “analgesic” field in the US, but now appears to be slightly behind GSK’s Advil, a brand GSK is picking up from Pfizer, which picked it up from American Home Products when Pfizer acquired AHP.  Band-Aids have never lost their leadership.  J&J was quick to grab Listerine, a Warner-Lambert product, when Pfizer parted with it.

At the same time, J&J steams ahead with their much larger prescription drug business.  The graphic below is the best data we could find on the top global companies in the prescription part of the industry, where J&J ranks third.

Which of these very different strategies – prescriptions only or a bigger focus on OTC – pays off best can only be known years into the future.  Those of us who admired the OTC giants of fifty years ago look forward to the evolution of GSK Consumer Health.  Will it show a growth and profitability record to rival that of the old American Home Products?  Only time will tell.  On the other hand, based on past history, it would be folly to expect anything but success from J&J and P&G.

Please post your comments and thoughts on this article here.

This chronology yields some perspective on how much this industry has been reconfigured over the years.  Giants have risen and then gotten bought.  Perhaps six or seven different companies have held the title of America’s largest pharmaceutical company over the last hundred years.  We follow the chronology with another appendix showing the changes at one company, Pfizer.

(Note that the only big US historic pharmaceutical company not mentioned above is Eli Lilly of Indianapolis, which has made smaller acquisitions but never had the desire to be the biggest, as did Pfizer.)

(Note that the only big US historic pharmaceutical company not mentioned above is Eli Lilly of Indianapolis, which has made smaller acquisitions but never had the desire to be the biggest, as did Pfizer.)

Appendix 2: An Example of the change at one company, Pfizer, from Wikipedia (unedited)

The other big players in pharma often have similarly complex and ambitious histories.