The Non-Profit Where the World Sleeps: Best Western

by Gary Hoover | May 8, 2020 | Articles, Foodservice and Lodging, Newsletters 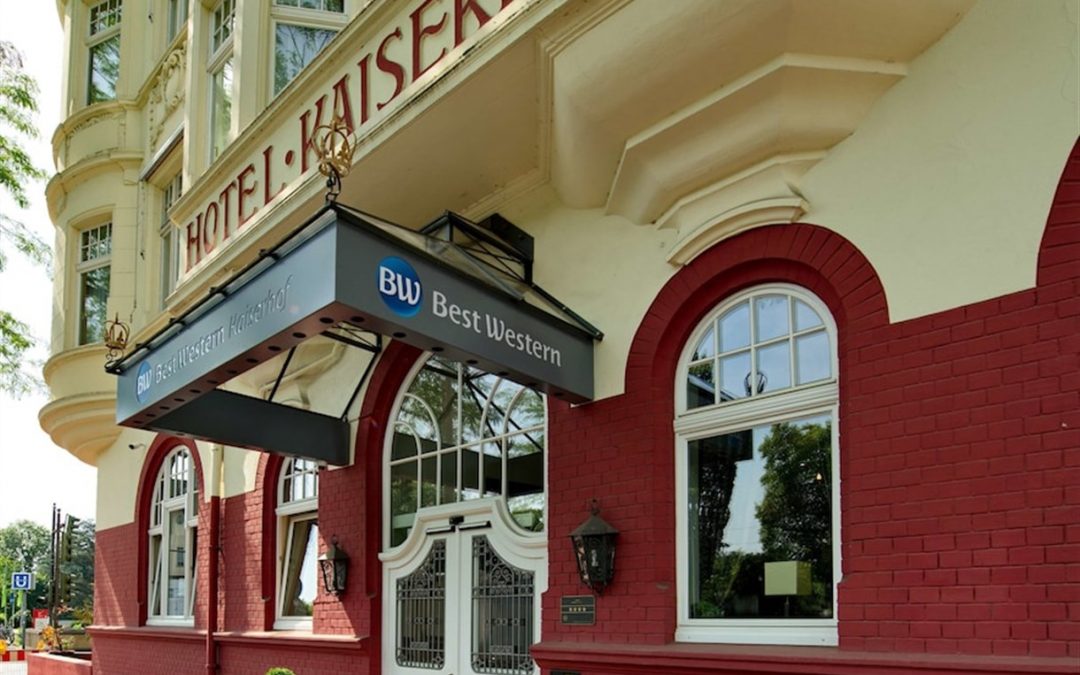 The lodging industry is one of the oldest industries on earth, and one of the most important.

No one can do business, trade, spread ideas, practice diplomacy, explore the world, or migrate without temporary lodgings.  From the lowliest hostel to the finest resort, from giant chains to locally owned independents, lodging touches the lives of most people in the developed world.  But even in the poorest countries, people stay with relatives or find cheap lodgings.  Travelers are everywhere, for every reason.

Today, one of the largest lodging organizations in terms of number of locations and total number of rooms is Best Western, based in Phoenix.  Few of Best Western’s millions of annual guests know the unusual story behind this great, highly successful non-profit enterprise.  Here is the story.

The Rise of Highway Travel

As Americans began to own cars in the first twenty years of the twentieth century, they also began to travel along routes inaccessible by the railroads.  Highways began to be paved; filling stations were built.  Alongside our expanding highway system, roadside inns began to appear.  The inexpensive hotels near city railroad stations became less important, as did urban boardinghouses, the original cheap stay.

The first roadside lodgings were often clusters of small cottages, called Tourist Camps or Tourist Courts.  Over time, these inns evolved first into Motor Courts and were eventually known as motels.  The large hotel chains like Statler and Hilton ignored the new opportunity, but independent “mom and pop” motels had sprung up across America by the 1930s.  Their quality and cleanliness varied dramatically.

Various associations had been created to promote travel – the Lincoln Highway Association was started in 1913 by Packard Motor Company President Henry Joy, Indianapolis motor speedway founder Carl Fisher, and others to promote their coast-to-coast route.  Two years later, Fisher also helped start the Dixie Highway Association, promoting a route from Chicago and Detroit to Miami.  These associations published guides to their routes, advertising gas stations, hotels, and restaurants along the way.

While business had boomed in the 1920s, the Great Depression brought new challenges to the embryonic motel industry.  In an effort to promote business, in 1933 the United Motor Courts Association was founded by a group of west coast “moteliers.”  This group was a non-profit which published directories of its members, available at each inn.  The idea was to “refer” customers to other members.  By 1937, United had almost three hundred member locations, stretching along the west coast and across the sunbelt, with concentrations in California, Texas, and Florida.  Other similar “referral” groups were founded, but none were as big as United.

After World War II, pent-up demand for new automobiles and for the chance to see America resulted in a boom in highway travel, further facilitated by the Eisenhower Interstate System that followed in the 1950s and 1960s.  The family vacation and the road trip became iconic American experiences.

At the 1947 convention of United Motor Courts, board member M.K. Guertin, who owned the Beach Motel in Long Beach, California, expressed dissatisfaction with United.  The organization was slow or reluctant to kick out motels which did not meet their standards or failed to maintain their properties.  Others shared Guertin’s concerns, and by late 1947 had broken off to form Best Western, with an initial membership of sixty-six motels stretching to Chicago but concentrated in the far west.  In 1939, a similar break-away from United had occurred in the eastern United States, with the creation of Quality Courts due to the same desire to uphold more rigorous quality standards.  By 1949, the people at Quality Courts had invited Guertin to meet, and the two organizations agreed to promote each other, with Best Western members west of the Mississippi and Quality Courts members to the east of the river.  Both Best Western and Quality Courts distributed hundreds of thousands of travel guides along America’s highways.

M.K. Guertin, born in Liberty, Texas in 1891, had migrated with his daughter to California in the 1920s, where he helped promote a relative’s motel and learned the advertising business.  In 1933, he had bought his own motel, the Beach, and then joined United.  When he and a few close friends founded Best Western in the late 1940s, he immediately hit the road, inspecting 507 motels up and down the west coast, driving 4,956 miles in twenty-nine days.  He accepted no payment for his time or travel expenses – Best Western had become a labor of love.

As Guertin signed up new members, he required each to become an informal inspector on Best Western’s behalf.  If he heard of a prospective member, he’d send an existing member to the property to see if it met his high standards.  If he heard that a member was not keeping their property up, he’d call another member and tell them to check on it.  Unlike United, Best Western under Guertin did not hesitate to kick out a poor performer – Best Western has forced out as many as 15% of its members each year.  By 1951, Best Western had grown to 197 members.

At the beginnings of this, there were few if any real motel chains.  Alamo Courts, based in Texas, tried to build a chain, but did not get very far.  In 1952, Kemmons Wilson of Memphis opened his first Holiday Inn, which was to change (and dominate) the motel industry for years.  In 1963, the United States had about 60,000 motels, up from 10,000 thirty years earlier.  By that year, Holiday Inn had expanded to 415 locations, but Best Western had 699, by far the largest of any lodging organization.

Also, in 1963, Quality Courts was restructured as a for-profit franchising organization, which continues today as industry giant Choice Hotels.  As a result, Best Western discontinued the co-marketing program with Quality, and began to enter the eastern United States.  For a couple of years, these eastern members were called Best Eastern, but were soon rebranded as Best Western.

The growth of the industry, coupled with intensified competition, kept Best Western on its toes.  In the mid-fifties, they banned coin-operated “Magic Fingers” from beds in the belief that they cheapened the overnight experience.  Best Western led the way with the first national reservations system, placing a teletype machine in each motel.  The “parent” non-profit organization gradually added services for its members: group buying of furniture, linens, and soap; accounting and consulting services; and motel planning and building advice.  Best Western provided travel guides, signs, and advertising materials to its members.

Throughout this period, M.K. Guertin apparently ran Best Western with an iron hand.  Even his friends called him a dictator.  His single-minded drive, ambition, and high standards created the basis for the Best Western we know today.  In 1966, the seventy-five-year-old Guertin lost control of Best Western in an internal board of directors’ fight.  He unwillingly retired and died four years later.

Nevertheless, Best Western retained its standards and its desire to grow.  Headquarters moved from Guertin’s motel in Long Beach to new facilities in Phoenix.  In 1967, the company began its first national advertising campaign (in Life magazine), to keep up with all the new chains including Holiday Inn, Ramada Inns, and others.   In 1969, Holiday Inn’s 1,071 locations finally caught up with Best Western, at 1,068 inns.  Television advertising appeared in 1972, on the Merv Griffin Show and Let’s Make a Deal.  Best Western began to expand outside the United States, adding Australia in 1975, Mexico in 1976, and Great Britain and Ireland in 1978, renaming itself Best Western International that year.  The company was by then printing over six million of its travel guides each year, each copy replete with tiny color photographs of each member inn.

Over time, the “referral chains” in America went into decline – all but Best Western.  Quality Courts converted to a for-profit company, as did others.  United Motor Courts, the original leader, declined due to low standards and was gone by the mid-fifties.  Yet the concept remains popular abroad, especially in Europe, where organizations like the French Relais & Chateaux (over 500 members) and Logis de France (2,400 members) operate on the same principle as Best Western.

In 2018, Best Western’s management and board recommended that the company convert to a for-profit, franchised organization, as Quality Courts had done fifty-five years earlier.  They believed this would allow the company access to more capital and be better able to invest in technology and marketing.  But the members voted down the proposal, and as of today, Best Western continues as the non-profit group of independent inns as envisioned by Guertin.

Today the “parent” Best Western has annual revenues of about $400 million, representing over 3,500 hotels and inns in more than 100 countries and territories.  All together, their 300,000 rooms generate in excess of $5 billion per year in revenue.  Best Western’s guest loyalty program is considered one of the best in the industry.

The company has added “Premier” and “Signature” collections for its most luxurious members, as well as the innovative Glo, Vib, Aiden, and Sadie brands.  Best Western has also entered the economy segments of the industry with SureStay and SureStay Plus.  Most of the original member inns are now called Best Western, Best Western Plus, or Best Western Premier.  Each member inn has its own personality and history.  Through thick and thin, through industry change, Best Western remains one of the largest lodging organizations in the world, owned by its members.