The Persistence of our Paths: From Native American Trails to Hyperloops 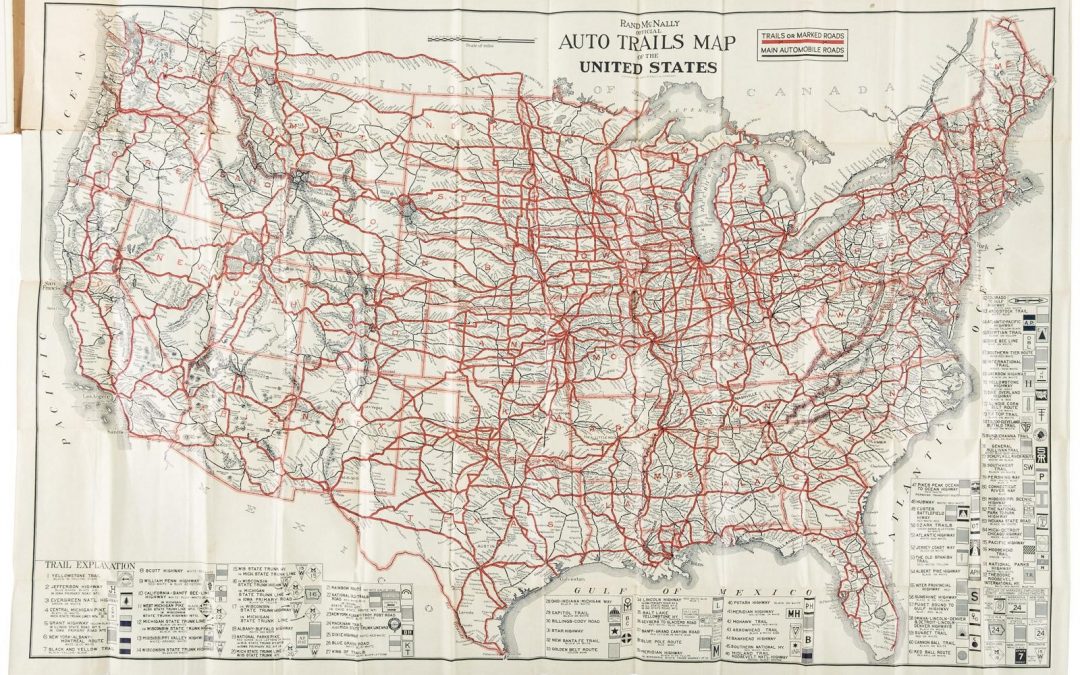 The routes travelled by explorers, immigrants, peddlers, and goods are a critical part of history. There would be no business or commercial history without the Silk Road or the great transoceanic shipping lanes. Here is a great story about the evolution of one of the first American routes.

Long before Europeans arrived in America, natives had created a trail from the upper reaches of the Potomac River (giving access to the Atlantic) to the origins of the Ohio River (yielding access to the vast interior). Finding the best path across some of the most rugged parts of the Allegheny mountains, the trail was eventually known as Nemacolin’s Path. In 1749 and 1750, the Delaware Indian chief Nemacolin and Maryland frontiersman Thomas Cresap supervised improving the trail for the Ohio Company. George Washington also worked to improve the trail.

In 1755, General Edward Braddock was ordered to seize Ohio from the French by taking Fort Duquesne, at the point where the Allegheny and Monongahela Rivers met to form the Ohio, later the site of Pittsburgh. Six hundred men were assigned to build a military road, following Nemacolin’s path from Cumberland, Maryland into western Pennsylvania. The road became known as the Braddock Road.

In 1820, as the west began to open up, the federal government approved extending the road to St. Louis.  It was extended westward into Ohio (via Wheeling, West Virginia) and Indiana.  The route included some of the first bridges in the west.  It became known as The National Road.

By the 1850s, railroads were all the rage, carrying people and freight across the country with unprecedented speed and ease.  Foremost among these was the Pennsylvania Railroad, founded in 1846.  Initially connecting Philadelphia with Pittsburgh, over time the lines stretched eastward to New York, Baltimore, and Washington.  Equally important, the Pennsylvania reached west and paralleled the National Road, passing through Columbus and Indianapolis enroute to St. Louis, reaching that city in 1870. (This line became part of Conrail after the collapse of the Penn Central in 1969, and then became part of the Norfolk Southern Railroad.)

By 1912, automobiles had come into use, and a national movement for “better roads” arose.  The first routes were called “auto trails” and given names.  Routes were marked by signs tacked onto telegraph and telephone poles.  The most prominent among these was The National Road, ultimately stretching from near Pittsburgh to Columbus, Indianapolis, St. Louis, and westward.

Other auto trails routes were given equally colorful names and heavily promoted.

The Pikes Peak Ocean to Ocean Highway paralleled the National Road, but was meant to be faster because it did not go through the big cities of Columbus, Indianapolis, and St. Louis.  It even went through my hometown of Anderson, Indiana, just north of Indianapolis.  I lived the first 13 years of my life two houses away.  Unsurprisingly, it was not as successful as the National Road.

In the 1920s, the top highway authorities from each state met and worked out a national highway numbering system to replace the old named roads.  While following the same routes, the new numbers simplified travel for everyone.  Odd-numbered highways ran north and south, starting with US 1 on the East Coast.  Even-numbered routes ran east-west, starting with US 2 near the Canadian border.  The most important, the National Road, became US 40 in 1927.  Millions of cars, trucks, and buses followed this route.

At the same time that America was rationalizing its highway systems, air travel began to arise.  The early airlines survived by carrying the US mail.  In 1930, US Postmaster General Walter Folger Brown devised a national system of routes, forcing the airlines into mergers to achieve his goals.  United Airlines got the northern route, from New York to Chicago to San Francisco.  American Airlines received the southern route, from New York to Dallas to Los Angeles.  And Transcontinental & Western Air (TWA) got the central route: New York to Pittsburgh to Columbus to Indianapolis to St. Louis and on to California.  In other words, the National Road.  These airplanes had a limited range, and hopped from city to city.  (Today the hub-and-spoke airline system has replaced those traditional hopping routes.)

In their first transcontinental efforts, airline passengers flew in the daytime and took the train at night, because airfields had no lights and nighttime flying was too dangerous.  (The Pennsylvania Railroad was an investor in TWA predecessor TAT, giving the lie to the myth that the railroads dismissed the future of air travel. But the federal government did not approve of the powerful railroads investing in the embryonic airline industry.)

(Later, Howard Hughes got control of TWA.  After WW II, TWA received government approval to make flights to Europe, breaking the monopoly — among US carriers — of Pan American Airways on transatlantic travel.  Keeping the same initials, Hughes renamed the airline from Transcontinental & Western Air to Trans World Airlines.  TWA was acquired by American Airlines in 2001.)

The most recent evolution in this story was the Eisenhower Interstate Highway system.  The number planners reversed the old system.  Odd numbers were still north and south, even were east and west.  But I-10 was across our southern edge, I-90 on the north, I-95 along the eastern seaboard, and I-5 up and down the west coast.  Thus US 40 was paralleled by the new I-70, in the east following the routes of the Pennsylvania Railroad and TWA.  Construction of I-70 began in 1956, but was not completed through the west until 1992.  It includes the highest point on the Interstate system, at over 11,000 feet in Colorado.  More millions of vehicles use this route each year.

Nemacolin’s Path and its extensions thus became the path, even today, for cars, trucks, buses, trains, and planes.

With this historical context, it wouldn’t surprise us to see this same old route used for high speed rail and hyperloops.  The more things change, the more they stay the same.

“Study the past if you would define the future” – Confucius