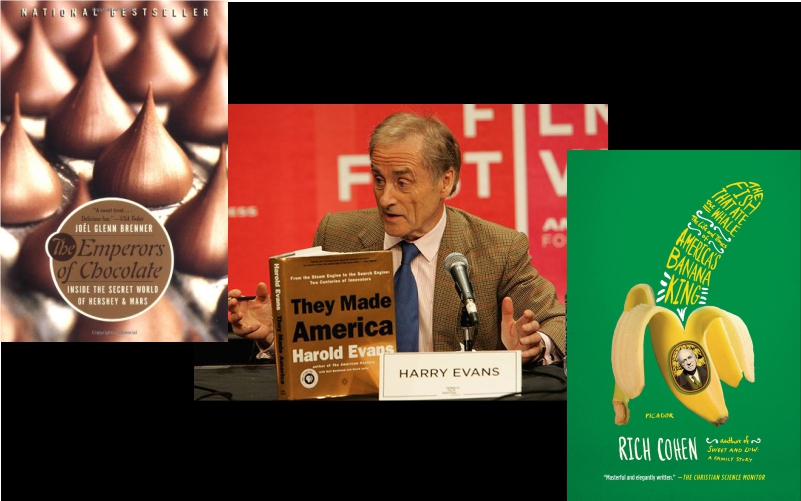 Some of us still have too much time alone and at home, so it is a good time to get some reading in.  In a prior newsletter, we recommended Alfred Chandler’s Visible Hand as the single most important book to read on business history.  Anyone who is literate about business or about history should read that wonderful book.  But, except for us business history lovers, it is a pretty serious book.  The following three books are lighter reading; we’d even go so far as to say they are fun, often reading as quickly as a novel.  The first book listed, They Made America, is a great, diverse introduction to business history for students of any age.


They Made America: From the Steam Engine to the Search Engine: Two Centuries of Innovators (Hardcover), by Harold Evans, is one of our favorite compendiums of history stories.  Outstanding British editor Harold Evans came to the US and writes about culture and literacy.  But he was so amazed by American ingenuity and enterprise that he felt compelled to write this big book full of great business stories.  Evans devotes from 4 to 16 pages on each of fifty very interesting entrepreneurs and innovators, with shorter sidebars on many others.  Those people range from Samuel Slater who pioneered America’s textile industry to Ida Rosenthal of Maidenform Bras and Ruth Handler of Mattel.   The ultra-famous Edison and Ford are covered, as well as many relatively unknown innovators like Samuel Insull and Gary Kildall, both with tragic endings.  The well-written stories are easy to read in convenient chunks.  Just make sure to buy the hardcover edition, as the paperback leaves out the wonderful illustrations and photos which greatly enhance the stories.   PBS also made a television series out of the book, but you’ll learn much more from the book!

The Fish That Ate the Whale: The Life and Times of America’s Banana King, by Rich Cohen, might be our favorite business history book for pure fun.  Sam Zemurray was an independent American banana grower in Central America who started with nothing.  He initially sold almost-rotten bananas from a train in the Mississippi Valley.  By living in the jungle and at times fomenting revolution, his company grew but was overshadowed by the Boston-controlled giant, United Fruit, which was equally “politically active.”  After selling out to United Fruit and becoming the largest stockholder, Sam took control of the company, to the shock of the Boston crowd and Wall Street.  The entire story is full of twists, turns, a fair amount of evil and perhaps a bit of good, but always entertaining.

The Emperors of Chocolate: Inside the Secret World of Hershey and Mars, by Joël Glenn Brenner.  The family-owned Mars company may be the most private, secretive major company in the world.  The 30+ billion dollar candy and pet food company is certainly near the top of any such list.  The Washington Post assigned novice reporter Joël Brenner to interview the company.  It was a trick, as the editors knew Mars never talked to the press!  Months of her efforts led to one of the first looks inside this fascinating company headquartered in a nondescript building in the suburbs of Washington, DC.   Equally interesting is the story of competitor Hershey, founded by an amazing fellow who left control of the company to an orphanage.  This book is another real page-turner.

Wikipedia tells us that: a lagniappe is “a small gift given to a customer by a merchant at the time of a purchase”, or more broadly, “something given or obtained gratuitously or by way of good measure.” The word entered English from the Louisiana French adapting a Quechua word brought in to New Orleans by the Spanish Creoles.

Here, for anyone who wants to give it a try, is a quick quiz.

Listed below are many of the most important retailers in 1972, a list compiled by your author at that time (the grocers were on another page).  Many of these companies have shriveled or failed to grow, but most have disappeared.  (Look how tiny those market capitalizations seem today!)

Yet one company, in the top half of the list, today has a market capitalization of $79 billion, and a second company, in the bottom half, is worth about $76 billion.  Email us to let us know if you think you know which two companies! (Note: both companies were later renamed after their biggest division and brand name.)

You can also put your thoughts on this question or the books reviewed here on LinkedIn.