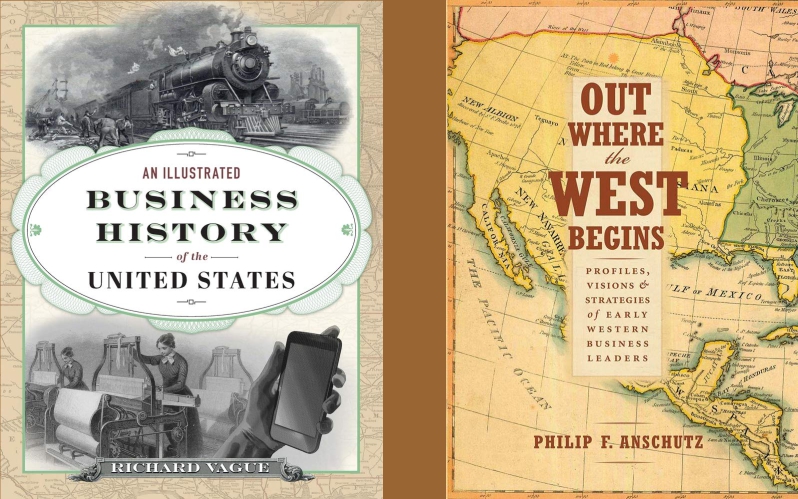 July 9 is the deadline for our high school essay contest, with $7500 in prizes, including $3000 for the best essay.  PLEASE SPREAD THE WORD! …. and, by the way, this is the 100th issue of our free weekly newsletter!

Today we recommend two books for our fellow history lovers.

Out Where the West Begins: Profiles, Visions & Strategies of Early Western Business Leaders, by Philip Anschutz, is an unusual book in several ways.

There are thousands of books on the opening of the American West in the nineteenth century, but far fewer on the business leaders who drove that opening.  Out Where the West Begins contains fifty short (7-10 page) biographies of the most important and interesting of those people.  The book includes an impressive diversity of business leaders and entrepreneurs, ranging from railroader James J. Hill, to timber baron Frederick Weyerhaeuser, brewer Adolph Coors, and restaurateur Fred Harvey.

We at the American Business History Center believe that the best way to understand business and entrepreneurship is to study the lives of “the greats” – how they thought, how they behaved, how they developed new ideas, how they dealt with failure.  For that reason, in conjunction with the Archbridge Institute, we have published over twenty biographies on our website.

To find fifty well-written biographies in one volume is thus a real treat.  There are few if any books that contain as many great stories, in as many varied industries.  Those factors alone make this an unusual book.

But the real zinger is who the author is.

Billionaires and successful businesspeople don’t write many books.  When they do, they are usually about their own adventures and exploits.  Relatively few businesspeople have a sense for, or love of, history.  So we were very surprised to discover that this great book was written by one of America’s most successful and least-known billionaire entrepreneurs.

Philip Anschutz began by taking over his father’s energy company when he was in his early twenties.  Now in his early eighties, Anschutz went on to become the owner of the giant Southern Pacific Railroad (which he sold to the Union Pacific), to be the second largest concert promoter (including ownership of Coachella), a newspaper and resort owner, a massive landowner, and a key force in Major League Soccer.  Perhaps most impressive are that his companies own the Staples Center in Los Angeles, the O2 Arena in London, the Mercedes-Benz Arena in Berlin, and shares in many sports teams, including the Los Angeles Lakers.

Anschutz’s “empire” is privately held, and he almost never gives interviews, so he remains largely “under the radar.”  Thus, we could not be more surprised that such a man would not only be interested in history, but take the time to produce this excellent tome.  In the book, he explains that his mother was a teacher, gave him a love of history, and hoped he would become a history professor.  Despite failing to achieve that mission, Philip Anschutz has done alright for himself, as well as making a significant contribution to our understanding of history.

The second book we suggest you read, An Illustrated Business History of the United States, by Richard Vague, covers even more ground.  Proceeding chronologically from 1763 through 2015, this beautifully illustrated volume touches on great businesses, great leaders, and contains plentiful data on the richest people, most important companies and industries, and largest cities in each era.  The three-hundred-plus information-filled pages are full of very short clips on hundreds of topics.

For example, the twenty-two pages on the “Gilded Age” (1878-1898) will yield a quick yet thorough grasp of the American economy and most important business developments of that era.  And the same is true for the 1920s, 1930s, and every other period.

We know of few books which provide such a broad view of the whole of American business and economic history, or do it in such an easy-to-digest way.

We highly recommend both of these books.  Because of the way they are structured, both are ideal for bedtime reading or diving in and out, “consuming” the short snippets, each of which is a story in itself.

For those of you who are interested in going deeper into business history, we have previously described these other sources: