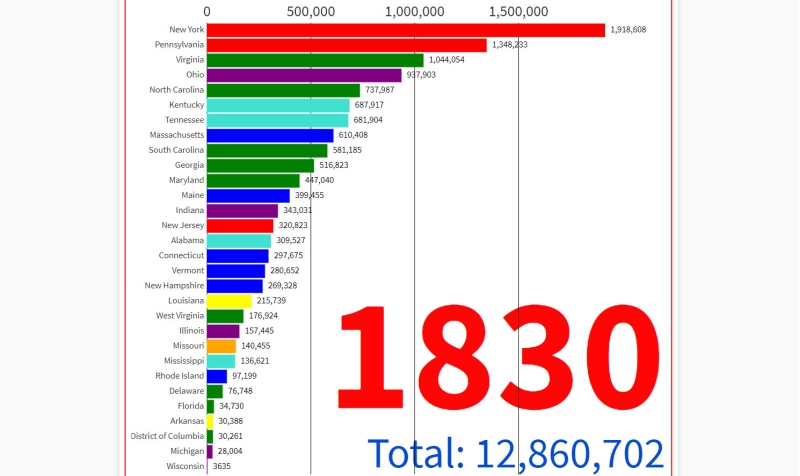 This week we present another of our popular animated charts.

In this one, we show the populations of the states of the United States from the Census, every ten years from 1790 through 2020.  The list is long, including all fifty ultimate states.  The data includes some numbers for areas before they became states but does not include current U.S. territories and possessions like Guam and Puerto Rico.

The movement of the American people and the growth of the nation underly all the business and economic history stories we tell.  At first limited to the east coast, people started moving by waterways and trails inland – to the “West,” which lay on the other side of the Appalachians.  New Orleans, Pittsburgh, Cincinnati, and ultimately St. Louis became centers of commerce.  Plentiful arable land drew people to Ohio, Indiana, and then Illinois, especially as the national railroad system was expanded.  For decades, the South lagged behind.  Ultimately California rose to the top, but today other states including Texas, Florida, and Arizona are booming.  These shifts have drawn entrepreneurs and industrialists to rising areas and away from declining areas.

You can find many other animated charts like this one on our Charts and Data page, which also has many historical business statistics and lists.  Several of them show the rise and fall of individual metropolitan areas (cities with suburbs).  This chart shows the rise of fall of metro areas beginning in 1790.  You can even see the impact on where the biggest companies are headquartered.

This week’s chart is a tall one that will not fit on your screen all at one time, so you need to scroll up and down to see all the bars.

You can use the green button at the lower left corner to pause the chart, and then slide the little triangle on the timeline to see how the states ranked in any given year.

The states are color-coded by census region, so you can get an idea of which sections of the nation were growing when.  The regions are:

We hope you enjoy and learn something new from our charts and data!