United: The Little-Known History Behind Another Giant Merger 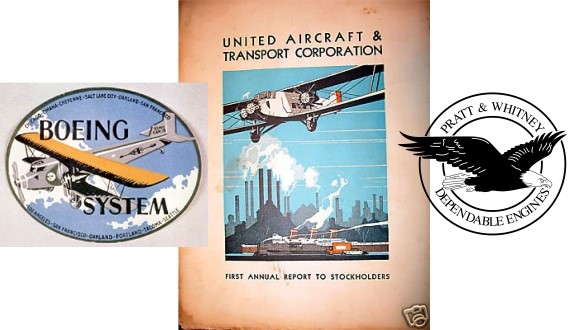 Last weekend, aerospace giant United Technologies announced that they were doing a “merger of equals” with fellow industry leader Raytheon.  According to most estimates, this will create the second largest aerospace and defense company (after Boeing), leaping ahead of Lockheed Martin and Northrop Grumman.  Yet how many know the full story on United Technologies, which at one time owned both Boeing and United Airlines?

Understanding the story behind the headlines requires that we go back to the roaring twenties, the second great merger wave in American History after the period from 1890 to 1910, which gave us US Steel, General Electric, International Harvester, and many others.  By the late twenties, the stock market was rocketing and new, largely art deco, skyscrapers were rising across the land.

As always, investors sought embryonic industries which had exciting futures.  Few industries fit the bill better than aviation.  Aircraft quality and safety were on the rise as the small airlines gradually assembled national route systems and attracted affluent passengers away from trains.

Some of the first airlines were operated by aircraft makers, seeking to ensure demand for their products.  Among them was Seattle’s Boeing, whose Boeing Air Transport had won the federal air mail contract for the Chicago to San Francisco route in 1927 and acquired a line that flew from Los Angeles to Seattle.  The “Boeing System” was successful in large part because it used the Wasp radial air-cooled engines developed and manufactured by the Pratt & Whitney Aircraft Company of Hartford, Connecticut.

The innovative Wasp engine was designed by engine designers Frederick Rentschler and George Mead.  The two friends had worked at Wright Aeronautical, the company evolved from the Wright brothers.  Rentschler was Wright’s president, Mead its chief engineer.  But the two could not convince Wright’s board of directors, largely composed of investment bankers, to take the risk of making the new engine.

Thus, by the merger boom of 1929, William Boeing and Frederick Rentschler were doing business with each other and were well-acquainted.  Rentschler suggested to Boeing that they combine forces, becoming an integrated maker of airplanes and engines, and operating an airline.  On February 1, 1929, the United Aircraft and Transport Company was formed, capitalized at $146 million.  Consolidating Boeing Transport’s routes with others, the airline operations were renamed United Airlines.  The consolidated company included Pacific Air Transport, manufacturer Chance Vought, and soon added the Hamilton Propeller Company, the Stearman Aircraft Company, and helicopter pioneer Sikorsky Aviation.

United Aircraft and Transport was but one newly created giant in the growing industry.

A third major grouping, The Aviation Corporation (AVCO), was formed in March of 1929, by IBM’s largest shareholder Sherman Fairchild and Wall Street interests.  AVCO hurriedly bought up as many small airlines as possible, finding the ones that were not part of Rentschler’s or Keys’ groups.  These were cobbled together to form American Airlines.  AVCO acquired about ninety companies, including Lycoming, a maker of airplane engines, and aircraft makers Vultee and Stinson.  AVCO was briefly controlled by EL Cord, the man behind the famous and beautiful Cord and Auburn automobiles (he also owned Checker Cabs and Duesenberg automobiles).

Just as it seemed that the growing industry would be dominated by these three big integrated aviation companies, the federal government decided that was a bad idea.  Since the feds handed out airmail routes, the most important source of airline revenue, the Postmaster General was able to make demands on the industry.  Taking office in 1933, Franklin Roosevelt’s Postmaster General James Farley departed from the organizational philosophies of his predecessor, Herbert Hoover’s Postmaster General Walter Brown.  The 1934 Air Mail Act declared that airplane manufacturers must be separated from airline operators.

United Aircraft and Transport gave birth to three companies.  United Airlines became the largest airline in the nation, a pioneer in transcontinental transportation.  Factories east of the Mississippi, primarily Pratt & Whitney, became United Aircraft; those in the western US became the Boeing Company.

In the eighty-five years since those breakups, these industries and companies have evolved a great deal and seen many more mergers.  United Aircraft was led by Frederick Rentschler until he died in 1956.  The company became one of the two big US jet engine makers, its Pratt & Whitney operation facing off against General Electric.  After buying up Carrier (the inventor of air conditioning) and Otis (the inventor of the elevator and escalator), United Aircraft was renamed United Technologies.

In recent months, United Technologies decided its shareholders would be best served if these three big operations were spun out on their own, creating the new, independent companies Carrier and Otis, leaving United Technologies as a pure aerospace company.

That leads us to the new announcement of United Technologies’ merger with Raytheon, another aerospace and defense industry leader.  While termed a “merger of equals” and adopting the Raytheon name, the company will be owned 57% by United shareholders, will have a board with a majority from United, and will be led by United’s Chief Executive Officer (CEO).

p.s. Do you want to learn more about this subject? Click here to watch our video on the history of the US Airline Industry.