Why Cars Don’t Have to be Black 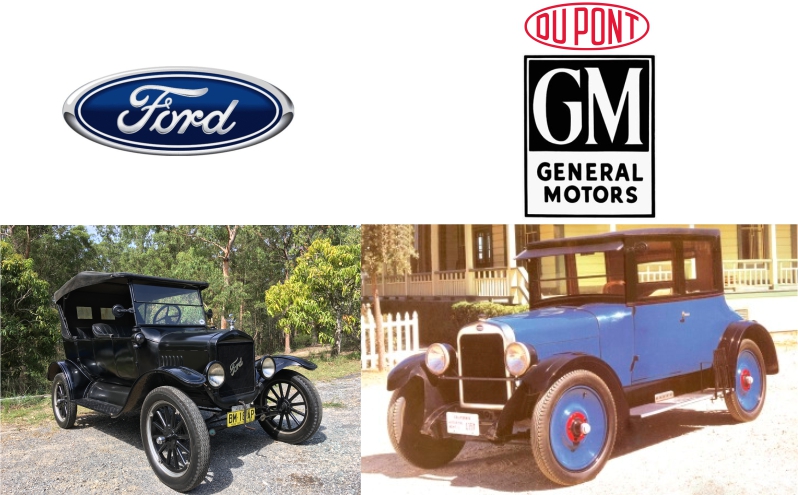 Henry Ford was happy to sell you a Model T in any color you wanted, as long as it was black.  Yet few know the real story of his exclusion of color, or how we came to have colorful automobiles.

Today, cars come in every color in the rainbow, and then some.  It is easy to forget that the automobile must function in a wide range of environments.  The engine, brakes, steering, transmission, radio, and everything else must work when the temperature inside the car crosses 120, and they must work at thirty below zero.  The paint (or “coatings”) on the car must be able to withstand ice, snow, sun, mud, rocks, dents, and bird poop without flaking or cracking.  Few paint applications require as much durability and longevity.

The first automobiles were made like horse-drawn carriages, carts, and wagons, sometimes by the same companies like wagon giant Studebaker, or founded by people from the carriage industry, such as General Motors’ founder William C. “Billy” Durant.  Similarly, the first cars were built on a wooden frame and painted with bright, colorful lacquers and finishes.

But those finishes flaked and peeled under the greater stresses the automobile was subject to, including heat from the engine itself.  More problematic, finishing cars required many coats, manually applied, and on average took three weeks to paint and dry.  Some colors took up to eight weeks.  Millions of square feet of buildings were required to store newly produced cars, keeping them out of the rain and dust while their paint dried.

Slow painting and drying were not a problem for the industry at first.  In 1900, there were only 8,000 registered automobiles in America.  Six years later (1906), there were over 100,000, a twelve-fold increase.  Just seven years after that (1913), the number again rose by ten times, to more than a million cars on the road.  With the rise of Henry Ford’s Model T, there were five million in 1918, ten million in 1922, and seventeen million by 1925.  Everything about American life had changed, though autos still shared the streets with horse-drawn vehicles in rural areas.  (Today there are almost two hundred million cars, SUVs, and pickup trucks registered in the United States).

This huge surge in automobile demand – and thus production – required faster processes at the factory.  Ford began to use a baked enamel “paint” on his cars, cutting the time required for painting and drying from three weeks (or more) to three days.  The process also saved money, lowering the cost of painting a car from about $50 to $30.  Given that Ford was making up to 1.6 million cars a year in the mid-1920s, the savings were as much as $30 million a year, equal to 15-50% of Ford’s profits, depending on the year.  Ford could never have produced the company’s millions of Model T’s on time without this advancement, at least not at the low prices he sold them for.

But the baked enamel paint was only available in black.  Thus, all Fords were black.

During this same era, the DuPont family of chemical fame had invested in General Motors with their gunpowder profits from World War I.  By 1920, the DuPont’s were in control of General Motors, which struggled to catch Ford.  Also in 1920, the chemists at the DuPont company began to develop cellulose-based paints.  Soon working with General Motors’ chief technologist, inventor Charles Kettering, by 1923 the DuPont and GM labs had invented Duco Paint.  Duco dried faster than baked enamel, was just as cheap to apply, and could be made in any color.  It was also brighter, stronger, and more durable than baked enamel.

In 1924, General Motors introduced Duco paint on the Oakland, a brand priced above Ford and Chevrolet.  The model was called the “True Blue Oakland.”  Over time, the Oakland make was replaced with the Pontiac brand.  GM soon offered Duco paint, in a large range of colors, on all its cars.  This program was enthusiastically supported by GM’s Chief Executive Officer, Alfred P. Sloan, Jr., who had always believed that “eye appeal” was an important factor in car sales, a very different opinion from that of his competitor Henry Ford.

In 1925, DuPont also made the paint available to other automakers.

The Model T had run its course by 1927.  While Henry Ford had put all his energies into one model of one car, General Motors’ Chevrolet offered more options at slightly higher prices.  In addition to the popular Chevrolet, GM produced step-up models by Oakland/Pontiac, Oldsmobile, Buick, and at the top of the line, Cadillac.  GM also offered bigger engines, more interior features, and focused on enclosed bodies, while Ford still made a lot of open “touring” Model T’s.

In 1927, Henry Ford stopped the production of the Model T and closed his plants for months, before introducing his next car, the Model A.  In the meanwhile, GM led by Chevrolet became the market leader in the American auto industry, a position the company held for most of the twentieth century.  Being the first big automaker to offer colors was just one element in that success, but an important one.  Ford gradually responded to GM’s strategy, including colors on cars.

DuPont continued to invent new automotive coatings: Duco was followed by the even better Dulux paints.  General Motors went on to become the largest and most successful manufacturing company on earth – and the DuPont’s at times owned half of General Motors.

In the century since Duco, a continuous stream of new automotive “coatings” has been invented.  New systems of painting also developed.  One of the most successful systems charges the paint and the car bodies with positive and negative charges and then uses electrical attraction to bond the paint to metal.

DuPont eventually sold their automotive and industrial coatings operations.  That business is now a separate $4 billion public company, Axalta.  Axalta is the second largest maker of automotive coatings and finishes in the world, after giant PPG, formerly Pittsburgh Plate Glass, but now out of glass and entirely devoted to the paint business.  Germany’s BASF, Japan’s Nippon Paint, and others also provide coatings for cars at the factory (the OEM market: Original Equipment Manufacturer).  Additional companies like RPM International and Sherwin-Williams, overall the largest paint maker, also make specialty automotive and industrial paints.

In those same intervening decades, other companies besides General Motors have prospered by placing greater emphasis on “eye appeal” than their competitors.  IBM, Apple, and Target all come to mind as companies which have historically considered design a key element in their business strategy.  But a great example remains General Motors and the way in which the company dethroned the once-invincible Henry Ford.