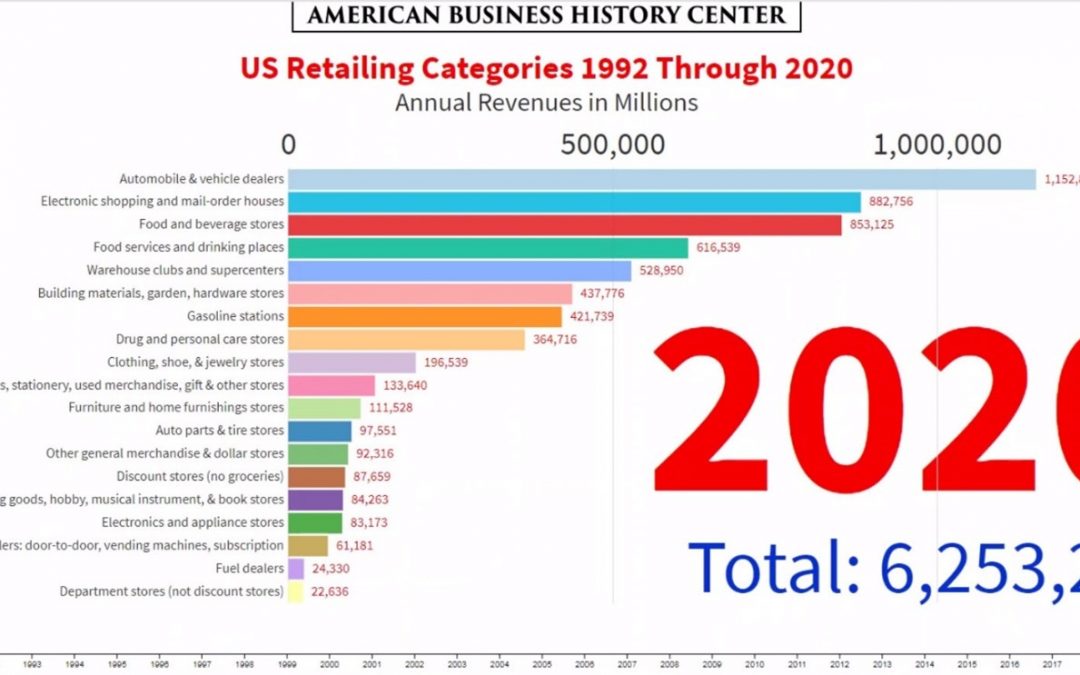 The $6.3 trillion US retailing industry has evolved continuously since the end of the Civil War, when the first chain grocery stores and first department stores began to develop.  This chart, based on data from the US Census, shows how the different types of retail stores have fared over the last three decades:

We suggest you watch the animated chart a few times and keep your eyes on one category to see how it has performed.  If you go to the chart on our data and charts section of the website, you can pause the chart, then move the little arrow on the timeline at the bottom to go to any selected year.

One of the most important shifts, one that has been going on for at least one hundred years, is the rise of the restaurant industry.  In 2019, for the first time in history, the restaurant industry approximately tied the grocery store industry in total revenues.  COVID set that trend back, but we anticipate it will continue in future decades.

Remember that warehouse clubs and supercenters also sell large quantities of groceries, so the two industries are not quite tied just yet.  This is offset somewhat by the non-food (general merchandise) products sold by some supermarket chains.

General merchandise stores are a very big category if you put them all together.  For the purposes of this chart, and to illustrate an important shift, we have broken them out into Department Stores (Macy’s, Sears, Penney’s, Kohl’s, etc.); discount stores (without a significant grocery department, a Kmart or an old Walmart), other general merchandise stores (including Dollar General), and the big one that rose up during the time frame in the chart: warehouse clubs and supercenters.

Walmart opened its first true supercenter, with a full line grocery store, in 1988, just before the chart begins.  The warehouse club idea began in the 1970s with the Price Club in California, later copied by Sam’s Club (Walmart).  Today Walmart is the world’s largest company of any type, the first one to ever generate over $500 billion in sales in one year.  Over half of their US business is in groceries.  Combined with Costco (successor to Price Club) and other warehouse clubs and supercenters, these formats have changed the way Americans shop.

As has “electronic shopping and mail-order,” which you can also see rising throughout the period in the chart.  In 2020, this segment was twenty-five times as big as it was in 1992, the year before Sears shuttered its massive catalog operation and two years before Amazon was founded.

Amazon is now America’s second largest company, about 70% as big as Walmart based on annual sales in 2020.  We expect that gap to close fairly quickly.

If you study the chart, you will notice several other trends, including the huge size of the automobile and gasoline station businesses, the latter being the most volatile retail category due to oil price swings.

We hope you enjoy our occasional charts and pass them along to anyone who might be interested!